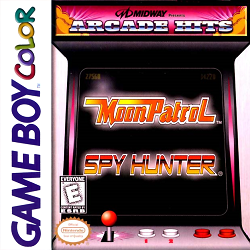 In this review, we return to the arcade to play the Game Boy Color game Midway Presents Arcade Hits: Moon Patrol / Spy Hunter. We find out how well this action game plays.

This game was released in 1999. This game features the game’s Moon Patrol and Spy Hunter. We previously played Moon Patrol for the Atari 5200. That game almost got an excellent score for its innovation and checkpoint system. As for Spy Hunter, this is our first experience with the game. So, we decided to give this game a try to see both how the first game progressed and what the other game is like.

Since the Moon Patrol game is so much like the Atari 5200 version, we decided to focus on the few differences and offer some commentary about this newer version.

What seems to be the biggest differences revolves around a few graphical tweaks. There is some better crash animations and a few adjustments to the colors on some objects.

Back when we reviewed the game originally, this game is surprisingly advanced for the time. By the time this version got released as a portable game, a lot has changed in the industry. Since so much has not changed in this version from then to now, it’s not as surprising or amazing. Still, as testament to how innovative it was back then, this game still manages to hold up reasonably well to more modern games at the time. The checkpoint system works very well, the quantity found in this game is still there, and the action and difficulty curve still works quite well. It’s not quite jump up and down in excitement innovative as it was back then, but it still holds up well.

While the graphics had a few minor tweaks, the audio is still more or less similar to what we had back in the Atari 5200 days. As a result, audio is a sore spot with only one track that has slightly too loud hi-hats. It’s good at first, but does become rather repetitive after a while. The sound effects are OK, but nothing too amazing.

Overall, this version of Moon Patrol holds up surprisingly well considering how little has changed. The checkpoint system and difficulty curve works very well for this game. It’s not as amazing as it once was, but it’s still quite the impressive accomplishment. The graphics are somewhat decent, but the audio is repetitive. A decent overall game.

Meanwhile, Spy Hunter is a totally new game for us. This game is a top down action racing game.

While the game shows you all of your controls, you won’t have access to a lot of the moves right away.

In the first part of this game, you have a sort of safety zone. You get 999 units of time. In that time period, you can crash your car and it won’t necessarily count against the number of lives you have. In that period of time, your objective is to simply survive the treacherous highway.

Eventually, the road will split. It doesn’t matter which direction you take, just survive being on the road as you fend off traffic. Once the road widens, your weapons van will appear. Slow down and it will drop two tire treads for you. At that point, you need to hit start to gear up (why start, anyway?) so you can drive up into it. From there, the van will pull over to the side of the road, stop, then let you back out. When you get out, you’ll obtain an new weapon upgrade.

The weapons you can get are missiles, oil slicks, and smoke screens.

The problem arises when you crash. If you crash, you lose all of your weapon upgrades. You’ll be stuck with your regular machine gun.

Points are mainly awarded through distance and speed. I you gear up, you’ll be able to earn more points more quickly because of the higher speed. The downside is that it is easier to crash your car. Instead of tapping and bumping into cars, you risk an actual full-blown crash. Slower speeds will generally make for easier driving, but the points you earn won’t be as big in the same period of time.

Once the units of time expire, you are now fending for yourself a lot more. If you crash your vehicle early on, it’ll be game over. You can earn extra lives seemingly through points. If I had a guess, you can earn a free life for every 25,000 points you earn. The free lives are denoted by the vehicle icons in the banner where the time units used to be.

At some point, you’ll be warned that the bridge is out. You’ll get an arrow pointing you to a side road. When you travel on that road, you’ll eventually splash down into the river itself. This is the point in time where your car will transform into a speedboat. You’ll be able to take on other speed boats that drop mines and even take on a helicopter along the way. Eventually, you’ll be able to re-join the road. What happens after, I’m not entirely sure because I lost my last life shortly after.

The difficulty is a little steep. It starts off challenging from the beginning and only gets more difficult from there. So, that may be something that turns off some players. In spite of the difficulty curve, the learning curve is pretty decent even if it isn’t exactly perfect.

Still, the white-knuckled action this game provides is pretty good in spite of the difficulty.

Generally speaking, this isn’t a bad game. It might be a little bit on the more difficult side of things, but the learning curve is decent. The action found in this game is pretty good too.

Graphically, this game isn’t bad. The changing environments as you travel down the road is pretty good. The detail might lean towards the basic side of things, but the smooth animation of everything is pretty good. A decent job all around.

The audio is OK. It has some decent jingles, but nothing much else as far as music is concerned. What is nicely done is the voice samples. This combined with the other sound effects does make up for some of the slack left behind by the music.

Overall, this is a pretty decent game. The content quantity is pretty good. Positive features include a decent learning curve and decent enough action. A downside here is the difficulty curve. The graphics aren’t bad because of the scenery and smoother animation of the environment. The voice samples make up for some slack left behind by the general shortcomings of the music. Still, an overall decent game.