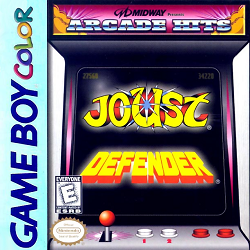 In this review, we hit the arcades in the Game Boy Color game Midway Presents Arcade Hits: Joust / Defender. We find out how well this action game plays.

Since the Atari games are so similar to these games, we thought we’d focus on the differences between the earlier versions and these games.

Joust is largely the same. The only real difference is that the options are easier to set and easier to adjust. You can pretty much adjust everything from difficulty to lives on hand at start to even how many points you need to the next free life. This allows you to set the difficulty for the game in every aspect.

The only thing I would say about this game is that this will easily appeal to anyone who are already fans of this game. This is because it is so faithful to the earlier versions out there. The problem is that it will struggle to really attract new fans to this game. This is because nothing was changed to make it more modern. As a result, play can be a little repetitive and simplistic compared to other games already out there on the handheld market.

The graphics have had a few slight tweaks, but nothing really noteworthy. Because of this, it does struggle to compete against other games already out there on the Game Boy Color. The bleak black background and minimal detail makes this game outdated.

The lack of music also adds to the antiquated gameplay. While the sound effects are still a joy to hear, the lack of any kind of music makes it hard to not find this game a little stale.

Overall, this is one of those games that changes nothing. While the portability of this game is certainly a novelty, there is nothing much else that is particularly appealing about this as far as new gamers are concerned. While it does scratch that itch for nostalgia, attracting new gamers to this game is a tall order. The graphics and audio as a result, are also making this game have that outdated feel to it. It may be a passable game, but not my much.

Defender is the other game that can be found in this pack.

Like Joust, it is a very faithful port to the original port. Also like Joust, it allows you to tweak just about every setting in the game that affects difficulty. This includes number of lives you start out with, how many points needed for the next life, and overall difficulty.

While the more user-friendly interface helps things, this game does suffer from the same problems as Joust. If you are already a fan of this game, you’ll enjoy it. If you are new to the game, it may be rather difficult to really figure out what is supposed to be so great about the game. The lack of any innovation since it’s initial releases doesn’t necessarily make this game any more competitive on the handheld system.

Graphically, the special effects are surprisingly well done on this system. The shots fired and the debris do make a nice splash. Beyond that, it’s hard to point out many positives given the bleak black background and minimal detail. As a result, the look is rather outdated in spite of the effects.

The audio is the same story. No music makes it harder to appreciate this game. The sound effects are OK, but nothing huge by a game of its time.

Overall, if you are nostalgic for either or both of these games, this game is for you. It seems that the requirement is that you must already like either of these games to enjoy it. For newer gamers, it’s much harder to understand what is supposed to be so great about these two games. The limited audience reach hurts this game in the long run. While the ability to tweak so many settings is helpful, it doesn’t really save this game necessarily. The graphics and audio are also outdated. Great for a hit of nostalgia, but little else.