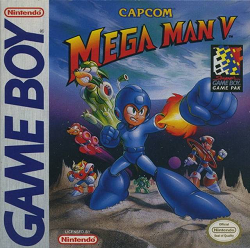 In this review, we embark on an interplanetary adventure in the final Mega Man game in the Game Boy classic series, Mega Man V. We find out if this action series ends on a high note.

This game was released in 1994 and would finish off the Game Boy version of the classic series. We’re about as familiar as you can be with the series as you can be without playing this particular game already. Previously, we reviewed Mega Man – Dr. Wily’s Revenge and didn’t find it to be that great of a game. We also reviewed Mega Man 2 and felt that it just didn’t cut it. We later reviewed Mega Man 3 and was pleasantly surprised that it was such an overall improvement over the previous games. While it wasn’t amazing, it still wasn’t a bad game to play. Finally, we reviewed Mega Man IV and applauded the innovations that brought new life into the series. In case you missed it, we also reviewed the entire Mega Man classic series on the NES (Mega Man, Mega Man 2, Mega Man 3, Mega Man 4, Mega Man 5, and Mega Man 6). So, it seems natural to finish off the Game Boy series at this point in time.

The plot is that the Stardroids have attacked Earth. When Mega Man confronts one of them, he finds that his mega buster is useless. After the confrontation, he awakes to find that Dr. Light had managed to rescue him. Dr. Light explains that he has upgraded Mega Man with a Mega Arm weapon which is ultimately a power-up fist that boomerangs back to Mega Man. The new weapon, Dr. Light says, will break through the alien technology that protects the enemies. Armed with the new weapon, Mega Man runs off to take on all the Stardroids.

The one thing that sets this game apart from every other Game Boy release is the fact that it doesn’t just take four Robot Masters from one game and an additional four from another and just mash them into one game. Instead, there is a whole set of brand new bosses to go after named after planets in our solar system. It might be of a cheesy concept, but it is actually an improvement because it does show the developers had an ounce of creativity. The downside is that most of the weapons you get from the planets don’t really make a whole lot of sense half the time.

Like every other Game Boy release, you get a choice of four Stardroids at the beginning of the game. You can defeat them in any order, but all of them must be defeated before you move on. when you defeat them, you get to take on the Stardroid you encountered in the previous game. Unfortunately, you don’t actually fight it, but rather, encounter a very familiar boss found twice in previous installments of this game. If you defeat this boss, you get to take on four additional Stardroids. Again, you can defeat them in any order, but you must defeat all of them in order to gain access to the last portion of the game.

In the levels you go through, you’ll encounter a number of items that can help you along the way. Most of these items are, by now, very familiar with avid Mega Man classic series games: small health pickup, large health pickup, small weapons capsule recharge pickup, large weapons capsule recharge pickup, free life, and energy container to name a number. A couple of items that have been introduced in Mega Man IV also make it into this game: a small energy container, small P chip, and a large P chip. The only new item I personally encountered is the super health which is given by Zero towards the end of the game. It appears to recharge all of your health.

A seemingly new set of items are the crystals that can be collected. There are four of them, and they are encountered in secret rooms in the last four regular Stardroid levels. If you collect all four, Dr. Light will build a new module for Mega Man that reduces weapons power consumption by half. While the bonus you gain is new, the concept of collecting four special items is actually nothing new to this series. Previously, you were able to collect letters to get a special weapon.

A new character introduced in this game is Tango, a cat that, when used, seems to attack enemies on the screen. The introduction of this character, as much as I am a cat person, was a rather cringe worthy moment for me. The thought that crossed my mind when Tango appeared was, “Really?”

One thing making the return is the make-shift store. If you collect enough P chips, you are able to spend it on new items and upgrades. Most of the items were present in the previous installment, but two new notable items are two separate upgrades for your Mega Arm weapon. Both of these items are definitely worth picking up as they both make your life easier later on in the game. The good part about this feature is the fact that it was re-introduced into this game. The bad news is, besides the Mega Arm upgrades, there’s no new innovation found in it. This was ultimately a missed opportunity because there were many ways to improve the store, yet nothing was done to improve on it. If it was more user friendly, and I did come up with ways of making it so earlier, then this feature would earn two thumbs up from me. Instead, I’ll give it a nod of approval here.

Generally speaking, there is not a lot of new surprises to be had in this game outside of what was already mentioned. The only noteworthy surprise, for me, was the fact that Dr. Wily wasn’t the final boss of the game. I thought this was a great way to change things up a bit towards the end, so that earned some respect from me. Beyond that, I think it is becoming apparent in this game that there is little left in the tank as far as innovation is concerned.

Another thing that I thought was a little anti-climactic for the series was the fact that the Stardroid weapons almost become a moot point in the game. You could pretty much give your Mega Arm the two upgrades and complete the game with only using the other weapons to destroy breakables. To make matters worse, I never had the need to actually use Tango once in the game. Just load up on lives and energy tanks and you could make it to the end of the game without too much hassle. It took the fun out of figuring out who was weak to what and there was little motivating me to explore this aspect.

The only thing that was really motivating me was replaying certain levels a couple of times so I could load up on P chips. By the end of the game, I ended up cleaning out Dr. Lights lab which only helped in making the game that much easier.

Of course, that’s not to say that this game was completely devoid of challenge. The final boss was plenty challenging. I also never encountered a boss with an instant kill attack until I encountered this game (there’s at least 2 bosses with such attacks). That was certainly interesting and added to the challenge of the game. While this game does tilt towards being easy until the end, this game doesn’t exactly have pushover difficulty which was nice to see.

Generally speaking, I did have some high hopes that this game would cap off an ever-improving series nicely, but it seems the Game Boy series ultimately peaked at the previous installment in terms of innovation. The game does have merits and it wasn’t a bad game, but with the Mega Man X series having already kicked off by this time, it was more important than ever for this game to stand out and show that this series was also great to play. Unfortunately, it fell short of that.

Graphically speaking, I thought this was decent enough. There was the odd time here and there that there was some slowdown occurring (and no, I’m not talking about the slowdown attack you get from a select few enemies), but this problem was rather limited. The levels were nicely detailed and blurring wasn’t a huge issue for me in this game. The cut scenes were decent, but not quite as impressive as the previous installment.

The audio was OK. The sound effects do everything you would expect to hear from a Mega Man game on the Game Boy. The music got the job done at improving the experience, but nothing I would call memorable was heard in this game as far as I’m concerned.

Overall, I saw improvement throughout the Game Boy series. It started off badly and just kept improving from there. This raised my expectations that the final game in this series was going to be great. Unfortunately, the series seemed to end on a less than impressive note. There are certainly merits to playing this game like at least finally introducing a whole new set of bosses. It does take what was great about previous installments and re-introduces them here. Sadly, very little was improved upon which was disappointing. It was a good game to play through, just not the strongest showing on the system.