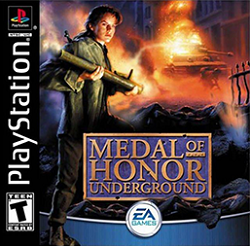 In this review, we return to the battlefield in the Playstation game Medal of Honor: Underground. We find out how well this first person shooter (FPS) sequel plays.

This game was released in 2000 and is the second game of the series. We previously reviewed the first game, Medal of Honor and, despite the reputation of the series, only found it to be fairly mediocre.

The game itself is more or less a prequel to the first game. You play the character Manon, a member of the French resistance during the Nazi occupation. The events take place before the events of Medal of Honor, though you do get to see references to Jimmy later on. Some reviewers found the lead being given to a female character a refreshing change, though this is not unprecedented by any means. In the same year, Perfect Dark was also released and it also starred a female character. In previous years, there was also the Metroid series starring a female character as well. Another notable feature in the story is the fact that it turns back the clock as opposed to moving the plot forward. This is also not unprecedented in gaming as the Lufia series did the same thing (see Lufia and the Fortress of Doom and the sequel Lufia II – Rise of the Sinistrals). So, while the plot of this game is interesting, it isn’t exactly going into uncharted territory.

A lot of what was seen in the previous game is also found in this game. You have the game menu that is really a room with different objects you can select. Each mission starts and ends with a movie of World War era footage. Probably the only real significant difference is the fact that things are more stripped down. Instead of receiving medals for missions done well, you simply get mementos.

In the missions themselves, the HUD (Heads Up Display) is largely the same. You’ll have various objectives you need to complete before the end of the mission. One notable improvement over the previous game is the fact that level design has been somewhat improved. A number of levels have less of a hall-room-hall-room-hall-finish feel to it. Some levels do still suffer from this, but other missions balance it out. As a result, it is actually more than possible to miss an objective as you race through the levels. While that may sound like this game is inherently more difficult, the levels are also more realistic in the process. There are actually alternate routs and dead ends in this game.

The weapons you get have largely stayed the same. One notable change is that the grenade was replaced by the Molotov cocktail. The other change is the addition of the crossbow. While the crossbow sounds exciting, it only resides in a level or two before vanishing again.

The enemies you face are largely the same from the previous game. Some carry rifles. Other enemies carry machine guns. A few of them even carry bazooka weapons.

Making a return is the mounted machine gun. Even though this was a staple in the previous game, the gun itself takes a much smaller presence within this game. What does take a larger presence, however, is the use of vehicles. In this game, you get to square off against motorbikes, half-track vehicles, and even a handful of tanks. In rare instances, there is even air support doing bombing runs in the level.

The AI has been both improved and still leaves a lot to be desired. The big improvement in this game is the fact that you get the occasional ally in the game. The fact that you get helpers is great, though the AI in them is far from perfect. The game is supposed to emphasize slow, calculated moves throughout. With many of your allies, they just run as fast as possible through the level. The only help they get is the occasional support fire and unlocking doors. The pitfall to the AI is through enemy AI when more than two sides are present. If one side fires on another, and you sit by and watch, every enemy in the map will fire at anything hostile – including you even if you have a disguise on. So, things are still quite hit and miss on this front.

The game also seemingly introduces locked doors. Some of them, as previously mentioned, are opened by allies in the game. Others are opened by switches. While this sounds like an improvement, the implementation of this only takes up a very small part of the game. In this respect, even the original Doom is more advanced than this game.

In a few missions, you are introduced to the sirens system. Shoot the sirens to disable them. While shooting security devices is nothing new, it is interesting to see this feature get implemented in this game even if it is rather primitive.

Like the previous game, this game features no real difficulty setting. So, what you see in game is what you get. The initial first few levels are fairly straight forward. What is different in this game is the fact that the end levels are much more difficult than the previous game. I just about gave up on the last few missions in the Manon campaign levels, but I did eventually succeed. I tried the bonus mission 8 mission, but only got as far as completing all of the objectives before getting killed.

Making a return is the aiming system. There is virtually no auto aim, so without aiming the gun, your accuracy is extremely hit or miss. Even with aiming, the cross-hair that appears on screen sometimes ends up being a suggestion. With weapons like the machine gun, you have to compensate for the inaccuracy which seems to force you to aim down. Grenade’s are also borderline useless with the aiming system employed here. An unfortunate reality. What makes the aiming system even more clunky is the fact that enemies sometimes even spawn right next to you. By the time you line up a shot, that enemy has already emptied an entire clip on you. Frustrating to say the least.

Generally speaking, this game does represent an improvement over the previous game. There are a few tweaks to the formula to make things interesting. Unfortunately, this game still struggles to keep up with other shooters that have been released already. This includes 007: The World is Not Enough, Perfect Dark, and Turok – Dinosaur Hunter. While there is that sense of authenticity throughout the game, that’s about all that is going for this game.

Graphically speaking, this game is an improvement over the previous game. Unfortunately, the improvements are only baby steps. When compared to games like Perfect Dark and Turok 2 – Seed of Evil, this game falls incredibly short. The draw distance has been improved – even for the sniper rifle. Unfortunately, the game only draws a small amount of additional distance when aiming. As a result, the sniper rifle’s only real use ends up being the power each bullet has.

The audio has taken a small step back in this game. This is found in the sound effects. In the previous game, you get a different sound effect depending on which kind of ammo you’ve collected. In this game, you only get one sound effect. The only strength in the sound effects in this game ends up being the speech throughout the game from enemies. They add some sense of realism. The music continues the orchestral theme by and large. A few levels have some unique tracks which did add a little personality to the level. Still, nothing memorable to be had here in the end.

Overall, having played two games in the series so far, I’m struggling to see what is so impressive about this series so far. The features found in the game are rather primitive. This game does tweak the formula a little so that it’s an improvement over the previous game, but it still falls way behind other games at the time. The feeling of authenticity in this game is about all that this game has going for it. The game does take what it has and weaves it all nicely together. The graphics, while improved, still fall way behind other games in this period of time. The music does have some character on some levels, but nothing was really memorable here. The sound effects, sadly, took a step back. This game might have done well if it was released in 1996, but in 2000, it ends up being largely a miss considering the reputation.

Overall
Furthest point in game: Died near the end of mission 8, level 1.