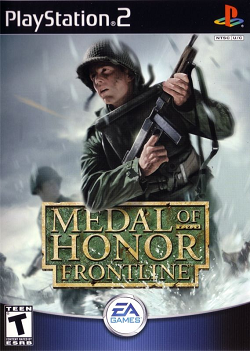 In this review, we prepare for our finest hour as we play the Playstation 2 game, Medal of Honor – Frontline. We find out how well this First Person Shooter (FPS) game plays.

Surprisingly, Jimmy Patterson reprises his roll as the main protagonist. This is the first time this series repeated a main character. You take on the famous beach assault before taking on special missions from the OSS (Operations of Strategic Services). Your missions will vary from reconnaissance to sabotage to assassination missions.

Generally speaking, you have 6 campaigns. Each campaign is split between 2 to 4 missions each. In each mission, you’ll get a series of objectives that you must complete before the end of the mission. If you fail to complete an objective, you’ll be captured. If you complete the level with all objectives completed, you’ll at minimum, receive a bronze medal. If you complete the level with a large portion of the enemies taken out, you’ll receive at least a silver medal. If you do so and have near full health, you’ll be awarded a gold medal. Complete all missions in a campaign with all gold medals and you’ll earn one of the major medals.

In addition to this, you’ll be given a choice before you embark on your first mission. That choice is what difficulty you’ll want to play. While the difficulty differences have largely remained the same from previous games, this game actually details the differences between each difficulty.

As far as weaponry is concerned, if you’ve played all of the previous games, this game will not feature anything new. The only weaponry differences seem to be a slight update to the graphics. There is a downside to this game in terms of weaponry. That downside is the fact that there is no real sub-menu for your weapons. Instead, you need to cycle through your weapons one at a time just to get to the weapon you are after. With a small armory, this isn’t a problem, but when you are loaded with weapons, you may find yourself spending several seconds trying to get to the weapon you are after. It would have been nice t0o have, say, the ring system in Turok 2 – Seeds of Evil, but we are stuck with a much more primitive system.

One big improvement in this game is the fact that you can actually hear the difference between a hit and a miss. The sound can be described as a whistling thumping sound. This helps make this game much more playable because you previously couldn’t even tell if you were hitting an enemy or a back wall in some cases. A thumbs up improvement if you ask me.

While there are tools in this game, they take on a much smaller roll. There are no binoculars, minesweepers, or portable radio to be had in this game. Instead, you’ll obtain “tools”, explosives, a disguise, and (new!) a camera. While exciting, a lot of them rely on merely pressing the action button to activate (the game prompts you when to do this). The disguise, meanwhile, is automatically activated. Once your disguise is blown, you’ll simply revert back to holding a pistol. Even then, a disguise is only really useful in a single mission.

What is probably the biggest improvement in this game are health pickups. The basics are all there. The canteen will restore 10% of health. The medical kit will restore 25% of health. The field surgeon kit will restore 50% of health. This system seems to revert back to the system found in the earliest games of the franchise. What is improved is found in what each item looks like. The canteen can either be white or brown. The kit is dark grey with the red cross. Finally, the surgeon pack looks like a white backpack. This improvement brings this game closer to the innovations found in, well, Doom and Duke Nukem 3D. Still, the ability to eat bread as a way to restore health is a nice touch.

One feature that is surprisingly not found in this game is the red flashing object feature. If you encounter a lever or button that needs to be pressed, then it would flash in previous games. In this game, you get a text prompt to use the action button. The only time the old feature is found is towards the end of the game. As far as I’m concerned, this game takes a step back because of the general removal of this feature.

Level design is worth mentioning. This game is almost like a remix of the previous games. Pieces of the original game as well as Underground and Allied Assault are found in this game. The great news is the fact that it’s only a room or a feature instead of a large chunk of a level. The level design, generally speaking, is quite respectable here.

A criticism I have of this game is the fact that this game features so few things not already found in previous games. Because of this, the game feels like more of a level expansion to the franchise rather than a sequel. The reprisal of the Jimmy Patterson roll surprisingly didn’t do this game many favors. If this game really added something of value to the storyline of Patterson, then it might have been worth pursuing. As it is, this game adds little to the character. This may have been better off creating a whole new character like the previous game and building that character up instead.

Another criticism I have of this game is the complete lack of checkpoints. Why this game couldn’t do what the previous PC game does is a bit of a mystery. While a seemingly small thing, if you die, you’ll be transported back to the very beginning of the level. It would have been nice to see this game have a checkpoint system like Mega Man 2, but it doesn’t even have that. This can lead to a lot of frustration in the game.

Generally speaking, with a first appearance on a new system, this franchise had every opportunity to make a huge splash by showing off something new and exciting. Instead, it ends up being a game of more of the same. What is found in the game is pretty decent. There are some small feature improvement. Unfortunately, there is feature regression. The lack of checkpoints can lead to frustration with the gameplay. The health drops are nicely improved. The enemy hit sound also improves gameplay. Unfortunately, that is the extent of what makes this game stick out. Levels are decently designed, but the game offers precious little for the gamer. So, a decent play, but nothing huge.

Graphically speaking, this game does a generally decent job. There is not a lot in the way of “wow” factor outside of some of the barrel explosions. It keeps up with other games, but only manages to keep to the middle back of the pack.

The audio was decent enough. The voice acting was nicely done. The sound effects are certainly passable. The music once again takes on an orchestral sound. While it does a decent job at providing mood, but there was nothing too much to be found that stands out to me.

Overall, this game does provide some improvements to the franchise. There’s a confirming sound whenever you hit something. The health drops are also improved. The difficulty differences are nicely spelled out. The level design managed to offer subtle references to previous games, though it keeps to its own nicely. The downside is that there is nothing that this game significantly offers that previous games do not already. The lack of checkpoints make for some frustrating play. The cycling weapons system is quite primitive compared to many games already out there. The graphics were decent enough and the audio was OK, but nothing really memorable. So, if you are already a fan of this game, this game will likely be a satisfying play. Otherwise, you’ll be in for a simply decent play that passes the time.

Overall
furthest point in game: Beat the game on easy.