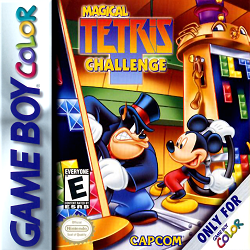 In this review, we knock on everything in the Game Boy Color game Magical Tetris Challenge. we find out how well this puzzle game plays.

For those who have played the N64 version of this game, you might think that this game would be very similar. In fact, this game has numerous differences and is almost an entirely different game with only a few similarities.

The story is that the Tetris festival is at hand. Tetris players from all over compete to win the festivities. The winner will become mayor of the city for a day.

When you start the game, you’ll be given four options. In one option, you can play a single game of Tetris. While you have a number of modes available, three will be locked. These locked modes are unlocked as you beat the quest mode in the three difficulties. The second option is quest mode, the main mode of the game. The third mode is two player mode where you can link your Game Boy Color with a friend and play against each other. The final option is the game status. Since almost everything revolves around quest mode, we’ll go into what goes on there.

In the next menu, you have a choice between four Disney characters: Mickey, Minnie, Donald Duck, and Goofy. Pete can be unlocked.

From there, you get to choose the difficulty: easy, medium, and expert. The different difficulties not only determine how hard each game will be, but how fast other contestants obtain coins.

When you start, you are given a single coin. Which coin that is is randomly chosen. In all, there are 18 coins that can be found on the map. Fortunately, you only have to collect 6 of them. If you manage to collect all 6 of them, you need to rush to the Tetris station to win the game. The challenge here is finding these coins.

Generally, you and the other contestants start with coins numbers 1-6. While it’s possible that the contestants can obtain other numbered coins, it’s generally a bad idea to count on that. So, where are the others?

This is where the scavenger hunt portion of the game begins. You can knock on various doors and objects for clues. Alternatively, some of these objects will distribute coins as well. Things like the fire hall, post office, and the library will more or less distribute certain coins. While some of the coins can be collected from the landmarks themselves, some of them need to be collected by nearby mail boxes or phones. What that challenge is to earn these coins depends on what you knock on (this is likely one of the only things fixed about this game).

Every time you have a chance to earn a coin, you need to complete a Tetris challenge. This can be a number of different challenges. This includes a speed challenge Towering Tetris, or Target Tetris.

In the speed challenge, you only have 1 or 2 minutes to earn a certain score and a certain number of lines. What those goals are depends on the difficulty. Make that goal within the time limit and you’ll earn a coin.

In Towering Tetris, the goal is to make it to the keyhole block. Clear the line with the keyhole and you win. So, where is the keyhole? Buried under all that garbage you start out with. While it’s more than possible to make it to the bottom, you need to wait a certain period of time as the garbage is pushed up. Sometimes, you have to kill time, while other times, you are struggling to keep up. This game, however, features a unique two block piece. Is you press “A” while it is falling, it will drop a single 1×1 block. These blocks can be used to clear lines. You have an unlimited number of blocks you can drop before the two block piece hits the ground and disappears. Very useful for getting yourself out of a tight jam.

Target Tetris has a few minor variations, but the objective is simple: work your way to the “targets” and clear them by completing lines. Some have limited pieces (in the case of the fire targets) while others don’t limit your piece count (acorn puzzles). This is largely a puzzle challenge more than anything else.

Other modes can only be accessed by challenging different characters. These modes include Signal Tetris, Up Down Tetris, and Magical Tetris.

In Signal Tetris, players must match the colors of the blocks with the bottom sample line. To toggle them, players need to complete lines. The last piece that completes the line toggles the block color below. If you have multiple pieces completing a line, then both, all three, or even all four pieces will toggle. You get to work with red and blue in easy and medium while you get red, blue, and orange on expert. Generally, this is probably the most annoying Tetris variation in the game.

Up Down Tetris is basically a two player game, though you only get to see the opponent through a bar representation. For every double, triple, or Tetris, you send garbage to your opponent. This garbage pushes up the opponents pieces upward with only one hole missing. Alternatively, you can send garbage through “hits”. Hits are basically combination lines. If you clear one line, then clear a second line on the next piece, you start forming hits. The hit counter stops when a piece fails to complete a line. A useful way to send garbage to say the least.

Magical Tetris works just like Up Down Tetris. The difference is that the garbage does not push the opponents blocks up. Instead, they’ll get oddly shapes pieces as well as a bunch of perfect squares. These pieces make it harder to work with and can cause your opponent to make mistakes in the process.

Now, the question you might have is how will you know which coin up might be getting when you take on a challenge or challenge another character? There are very limited ways of knowing, but just talking to the challenger won’t do it. At that point, you’ll only find out after you win.

One method to find out beforehand is to go to the Tetris Building to get an update. The update will reveal every coin a fellow contestant is carrying. Another method is to knock on various doors. The contestants houses will reveal the starting coin that contestant is carrying. Finally, you can pick up clues scattered throughout the map. A number of these objects will tell you which challenge has which coin.

As you gather clues, you may run across one of three clue-givers telling you a couple of colors for hidden island. There are three in total. One will reveal the first three colors. A second will reveal the next four colors. Finally, the third one will reveal the final three colors. Only when you collect all three clues will you be able to challenge the secret island challenge. Memorization is not required as the game will remember for you. If you go to the island, you’ll be asked if you want to take on the challenge. If you say yes, you’ll take on a Signal Tetris challenge.

If you beat the Island challenge, you’ll be awarded the “F” coin. If you have collected every other coin, then the “F” coin will fill the last slot. Otherwise, it will sit on the bottom part of your collection until you collect all but one of the remaining coins first.

If you collect every coin, then you must get to the Tetris building to win. If you get there first, you’ll win the game. In the event another contestant wins, then it’ll be game over for you. So, getting every coin quickly is essential.

One thing that can be appreciated is just how many modes of Tetris there are. The variety of Tetris games really work in this games favor.

A big downside is the scavenger hunt side of things. While I can appreciate how this can give the game challenge, the game really doesn’t give you much to work with. You have no map and you may find yourself running around in circles just trying to find out where you need to go next. If the game left bread crumbs by indicating what mail box, lamp post, man hole cover, and phone you have already completed, this game would be markedly more tolerable. As it stands, the overworld portion gets tiring and annoying after a while.

Signal Tetris is definitely an irritating form of Tetris. Instead of challenging the players skill at Tetris, the game is mostly revolved around luck. Yes, you can try and manipulate pieces so that the right color gets toggled, but often, you’ll find yourself having to clear out a bunch of the play space just to make the game survivable. By that point, you have likely scrambled most of the blocks anyway, forcing you to start from scratch. The game really doesn’t work in the end as far as I’m concerned.

I did like the two block piece dropper in the Towering Tetris game. The game would otherwise be annoyingly difficult without that. It might be a little too overpowering, depending on the situation, but I’m glad this innovative feature was put in that particular game. So, a thumbs up from me on that idea.

Generally speaking, this game starts out very interesting. There are a lot of different areas to explore and a number of different challenges you can take on. As you progress through the game, however, things get gradually more annoying. Sometimes, you’ll find yourself finally getting the second to last coin only to see another contestant beat you by crossing the finish line. While the different challenges are great for variety, some variations end up being annoying (mostly Signal Tetris). At the end of the day, it’s an alright game, but nothing too exciting.

The graphics are alright. The characters and environment are fairly well drawn. The Tetris portions are not bad. I didn’t find anything really flawed, but I also didn’t see much that necessarily wowed me either. Pretty good, but not amazing.

The audio was pretty average. While elements of the tracks from the N64 version can be heard here, the music isn’t all that exciting. The sound effects are also very average. An average effort.

Overall, this game does start off intriguing, but it just gets annoying the further along you get. The scavenger portion is probably the weakest part of the game. While the variety is nice to see, Signal Tetris is just annoying and revolves mostly around luck. The piece dropper in the Towering Tetris is a nice addition, though. The graphics aren’t amazing, but they weren’t bad either. The music is decent, but nothing memorable. Sound effects are very average. So, it’s an OK game, though nothing to get excited over.