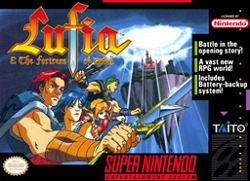 Lufia & the Fortress of Doom is the first in the Lufia RPG video game series. It was released on the SNES. We take a look and see if this long game is worth a play through.

Lufia & the Fortress of Doom was released in 1993, a year before the massive RPG SNES title Final Fantasy III. It would kick off the Lufia series which, to this day, only has a small handful of titles to it’s name.

The game has an interesting twist. You start off 99 years before the events of the main game as the four hero’s that defeated the Sinistrals, the games main antagonists. The characters are leveled up, equipped, and have an arsenal of items in their inventory to make not only the fights in the main dungeon a walk in the park, but also the final bosses – the four Sinistrals. One by one, you fight each and every one of them until they are all defeated. The Fortress of Doom collapses in the sea with the hero’s barely escaping with their lives. After that, 99 years pass and you eventually take control of the Hero (named however you desired). The Hero is having a difficult time trying to keep the local army interested in training mostly because battles are few and far between. Eventually, monsters begin to appear, thus causing the Hero to embark on a journey to investigate.

The game does share similar characteristics to other RPG games like Breath of Fire and Final Fantasy II (SNES) in that it has three main areas of the game players shift between all the time. There is the overworld which allows players to travel from one location to another, an in-location area which can be a dungeon or a town, and a battle sequence screen whenever players encounter enemies. When in the overworld and in dungeon areas, battle sequences are triggered by random encounters in that the screen suddenly shifts from the dungeon or overworld screen to the battle sequence. What makes this game different from others at the time is the fact that the overworld or dungeon screen is retained as a background (albeit darkened) while the main battle takes place over top. If a player successfully defeats the monsters in these random encounters, the party is awarded experience points, gold, and the occasional item.

The game features a maximum of four characters in total. Each character has a particular characteristic, though, for the most part, you ultimately get two warriors and two magic users in your party.

While some items do come from monsters, most items come from stores and treasure chests. Treasure chests are scattered throughout the game. This includes stores, towns, and (of course) dungeons. A unique characteristic is the fact that some treasure chests are actually hidden. Some of them in flower beds, other times, they are hidden in harmful swamp areas. In all, there are 655 treasure chests to be opened in this game.

Sometimes, items are located in dresser drawers and shelves. Simply using the active button will allow you to search these areas. In all, there are 136 item locations in the entire game.

On rare occasions, items can be obtained from non-playable characters (NPCs). Sometimes, this is triggered by completing certain objectives while other times, it’s merely a case of having the correct item in your inventory (i.e. purple newt).

Some items and spells are curiously named. A grilled newt, for instance, restores a small amount of health. Strong is a spell that restores some HP. Trick is a spell that raises your attack rating in battle. So, figuring out what each spell and item can save you from having a moment at staring at the list of items or spells and wondering what spell cures what. This is one area in this game I didn’t like. The names should be a lot more straightforward and easy to understand than this in my opinion.

Throughout the game, you’ll also encounter different switches and panels. There are panels that restore your health and mana. These panels look like a blue flowing circle with a symbol of some sort in the middle. Simply walking on top of them will restore your health/mana. Warps look similar to these panels, but are often either just a plain circle on the ground or a circle with prongs sticking up. Either way, stepping on these spaces will take you from one location to another in this game (sometimes, to completely different dungeons even). Most switches look like levers on the wall. Some switches simply have one function when you activate them. Others have a menu, giving you a choice on how to operate them. Switches can affect elevators, doors, and even the destinations of where teleporters take you. Additionally, there are floor buttons. Stepping on them will affect how certain portions of the level in question operates. Sometimes, you have to press them in a particular order or configuration to solve a particular puzzle.

Battle sequences work in a particular way in this game as well. Enemies are either in groups or placed individually. If the attack you use only hits one enemy at a time, then the attack will be randomly distributed in the groups. If it is a multi-target attack, then it will hit all in a particular group. If you have nothing but single monsters, then the attack will only do to a single monster. The particularly annoying aspect, I found, is that when one character defeats a monster with another character still waiting to attack that monster, then the second character will simply strike at the empty space, rather than have the attack redirected to another monster. I have yet to encounter another game that allows this. If you encounter enough of the same monster, you ca kind of guesstimate how many attacks are left before the monster is defeated and distribute the attacks accordingly, but it’s an issue that will eventually crop up from time to time in fights regardless.

One element in this game that I thought was interesting is the fact that this game is actually rather large. The size of this game isn’t really a problem in the beginning, but as you get towards the end of the game and obtain a vehicle for traveling, a map like this almost becomes necessary as it identifies all of the little towns – some of which you’ll have to revisit. It’s a really good thing that the game also features that old man at the teleporter shrine because the old man drops hints as to what to do next if you ever become lost and don’t know what to do next.

For me, this game isn’t devoid of flaws. In addition to what I mentioned earlier, I felt that the random encounters were a bit excessive in the frequency. It’s sort of annoying in the beginning from time to time, but when you can finally sail around in a boat, encounters can happen merely 5 squares apart. Since the boat you control travels quickly, this means you barely spend a second between battles while sailing. It isn’t until you begin flying that you are free of this obstacle. Unfortunately, that doesn’t happen until near the very end of the game, so you’ll only ever briefly enjoy this compared to the amount of time you spend trapped on the ground fighting the hoards of monsters.

I also felt that this game could have benefited either from some sort of basic radar of where you wanted to go or a basic map with simply points or even tags hovering above towns and caves, naming where you are about to enter. Otherwise, navigation can be a bit difficult towards the last portions of the game.

Generally speaking, though, I felt that this is one of those games where you spend a few hours playing, then take breaks in between. The game is very approachable once you come back depending on what note you left the game off last. In essence, this is a great game if you take it in doses. I found it impossible to really just sit down and just play through the whole game in one shot, but once you play in doses, this becomes a great game.

Graphically, some people said that this game was horrible compared to other games produced at the time. Some even suggested that this game is bad compared to the SNES release Final Fantasy 3. The problem with that criticism is the fact that Final Fantasy III was released after this game, so I’m not sure it’s exactly a fair criticism. Still, some games had better graphics than this game that were released at the time. Others had worse graphics. So, I would rate this game as decent, but not spectacular. Some games, for instance, take the approach of having a tailored background to certain battle sequences depending on where the player was. This game skips out on this entirely and uses the map as a backdrop instead. While an interesting way to differentiate the game from others, I think the custom backgrounds are a better idea in the end. So, there is some points lost on that point. Still, it’s not to say that this game is devoid of art. There’s lots of monsters found in this game. Some seem kind of basic (like newts), while others are intricately designed (efreet, Sinistrals). So, that’s why I don’t say the art was bad when you factor in all of the monsters that were in this game. In fact, this game doesn’t suffer from recoloring syndrome like other RPG games.

Audio was really good overall. The Fortress of Doom music that you encounter in both the beginning and end of the game was probably amongst my favorites in this game. Another great song in this game is the port town music. Generally, the music ranges from good to excellent. I can’t really think of any songs in this game I actually dislikes. The only criticism I would have with the music was the fact the music was generally “loud” by default. It can almost be overpowering over the sound effects, but not quite. It was as if the developers found the threshold where the music just became overbearing in the game as a whole and backed it off just a little bit. The sound effects were nicely done. Can’t really think of anything to complain about in this department.

Overall, this was a great game all around. If you play this in small doses, this can easily be a mild obsession until you complete it. This game certainly had it’s flaws, but these flaws weren’t entirely taking over the gaming experience. They were just minor nuisances. I wouldn’t classify this game as one of the greatest of all time, but it is certainly worth playing.

Furthest point in game: Beat the game. Average levels were hovering around 83 amongst my characters. You really only need to be somewhere around level 50 – 60 to beat the game, but my moments of getting lost caused me to grind my characters up to slightly higher levels by the end of the game.