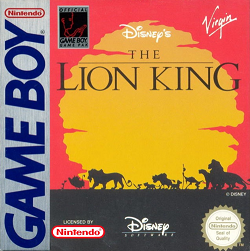 In this review, we try to roar through the Game Boy game The Lion King. We find out what this adventure game is all about.

This game was released in 1995. It is the last port of this particular game.

You play the character Simba. Your progress through the game as Simba grows up. The ultimate goal is to be ruled the King, stopping Scar from obtaining this position.

You start off as a young Simba. You have a health meter that allows four hits of damage, though there are pits that will kill Simba instantly.

You have two forms of attack: a roar which stuns enemies and an ability to jump on enemies to kill them. Some enemies require stunning (such as porcupines) before you use the jump attack.

In addition to exploration abilities, Simba has the ability to use other animals in the animal kingdom to move around. This includes ostriches, rhinoceroses, and even monkeys.

Along the way, there are a couple of items that you can pick up. The beetle allows Simba to restore half of his health. The 1up icon adds an additional free life.

Simba can run and jump as you would expect. He also has the capability of climbing up ledges. If Simba can reach an edge, he can grab a hold of it and pull himself up with up.

While there may be other elements of this game, this is as far as I got.

This particular version of this game is absolutely filled with problems.

For one, the controls are sluggish. If you are performing a running jump, you need to account for about a tenth of a second before the jump command will actually execute. This alone leads to many cases of running off cliffs or running into pits. Even though you hit jump in time, the game may take too long to recognize the command.

Another problem with this game is collisions with the land. A lot of jumps look very straight forward, only when you attempt them, you end up failing miserably. This is because the are you land in can be a little further in from the actual object. What’s more, you need a lot of height just to perform the grab function. This makes a lot of seemingly reasonable ledges jut out of reach. In other instances, the floor and ceiling are so close together, you must perform a running jump just to squeeze through.

With these two problems, this game starts of very difficult and only makes things more difficult from there. Level 1 alone took a fair amount of patience to complete. When level two hits, the difficulty jumps from there. This alone made me just quit playing altogether.

The learning curve might have been quite reasonable if the problems didn’t exits. As it stands now, you spend a lot of time fighting the games flaws just to compensate for such a flawed game. By the time you get to getting used to how to work around the problems, a lot of patience has already gone out the window. Throw in an annoying boss fight at the end of the first level as well as an annoying second level and I was ready to throw the Game Boy across the room in frustration.

Generally speaking, this game is virtually unplayable. The sluggish controls and poor collision detection makes this game exceedingly annoying from the very beginning. Add a steep difficulty curve between levels and this game becomes more of an exercise on how much torture you’re willing to go through before getting violent. I already do not recommend this game.

Graphics is probably the games strongest element. What makes this game shine is the animation of Simba. The care and detail put in to different animations is quite impressive for a handheld game. The levels themselves are decently drawn out. The second level is actually quite well realized from an art perspective. The problem this game experiences is the hardware blurring from quicker movements. While not terrible, it isn’t amazing to see either.

The audio isn’t amazing. The music is pretty decent, though sometimes left on autopilot (such as at the end of the level). The sound effects, unfortunately, just didn’t work for this game. It’s like the developers looked at the hardware specifications and said, “Yeah, this isn’t happening”, threw some basic stuff in there and washed their hands of it. So, it’s unfortunate what the end result is there and the game suffers from it as a result.

Overall, I definitely don’t recommend this game. The controls are sluggish and the collision detection with the ground is brutal. Because of this, the games difficulty curve is pretty extreme and the learning curve is steep. It’s generally a frustrating play. The graphics are about the only place where this game even remotely shined with the animation of Simba and the designs of level 2 from an artistic perspective. Unfortunately, the sound effects stopped the audio from being that passable. Definitely a game to add to the avoid list.

Overall
Furthest point in game: Died trying to get to the second rhino after the first checkpoint in level 2.