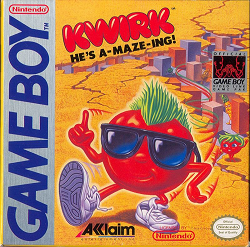 In this review, we step things up in the Game Boy game Kwirk. We find out if this puzzle game is worth a play.

You play a tomato who is trying to rescue his girlfriend after exploring the dungeon maze.

If you’ve played the game Boxxle, it’s easy to note some similarities. Indeed, the puzzles revolve around space and challenge the players logic skills. There are, however, a couple of key differences that separate this game from Boxxle.

The similarities between the two game revolve around pushing objects to critical parts of the maze. You can’t pull anything, so it’s pushing only. That is about where the similarities end.

Instead of moving boxes to a predefined area, the goal is to move a character to an exit. Along the way, there are different obstacles the player must overcome. The first obstacle of note is the turn style. There is the “L” turn style, the line turn style, the “T” turn style, the 1×2 turn style, and the “+” turn style. You can push your way through a turn style, but there will always be some kind of effect this leaves behind. Some paths become blocked while others become free. It’s all in how the map is configured.

To complicate matters, there are boxes of differing configurations. They either come in lines, squares, or rectangles. Regardless, they come in numerous sizes. Regardless of size, you can push any of them.

The third notable obstacle are the pits. The pits can take any kind of shape and size. This can range from a single 1×1 hole to half a level being missing. Part of what makes this game dynamic is the fact that the boxes can be used to fill in the pits. As long as the entire box fits, it can sink into the pit and form new flooring.

Finally, there is the obvious brick walls. They can serve to block and otherwise contain the puzzle into a specific area on the screen.

One way this game increases the dynamics of this game is the buddy system. Though they don’t seem to appear that often, you may find yourself in a puzzle with more than one character. You need to press select to switch between them. The most I’ve seen was three. While the multiple characters can give the player more options in solving the puzzle, all of the characters must be able to make it to the staircase in order to complete the puzzle. This is more for players taking on the “Going Up?” mode.

The configuration of a puzzle can range from working your way through a cluttered room to filling in key pieces of pit to moving through turn styles to a combination of all of the above. So, because of the different elements at play, there is a large range of puzzles you can come across.

there are three main modes of play here: “Going Up?”, “Heading Out”, and vs. mode. Vs. mode is meant for multiplayer.

Going Up is the main puzzle mode. You have three difficulties: Easy, Average, and Hard. The difficulties correspond with the numbering system. Each difficulty contains 10 floors. If you start your game on easy and complete all 10 floors, you’ll go from floor 1-10 to 2-01. If you pick the Average difficulty, you’ll immediately start on 2-01. Naturally, Hard corresponds with the 3-## levels. So, in total, there are 30 levels in this mode. What’s interesting about this game is the fact that you can also just pick a level as well. So, if you get stumped, you can try a different level if you wish. No real score in this game, the goal is to complete as many levels as possible.

Meanwhile, the Heading Out mode is more of a timed mode. You’ll be given a choice on how many rooms you want to complete at what difficulty. After that, you must complete every level consecutively. The faster you complete the levels, the more points you earn. The puzzles are generally smaller, but the time expectations can be tight. Complete all of the rooms and you can add your name in the top scores. The more levels you put in, the higher potential you have, but also run a greater risk of not completing the run.

One thing is for sure, this game does not start at push-over easy mode. While the easiest levels can help players get used to the mechanics of the game, it still forces the player to think a bit. The difficulty curve is a little steep, but it’s a fairly consistent steepness. Meanwhile, the learning curve is definitely reasonable here.

The variety in the levels is certainly well done. Given the consistent style of play, I was expecting the game to get repetitive after a while. Fortunately, this is never really a problem as there are a lot of different obstacles to over come. This involves numerous strategies for completion.

The game did run the risk of being over relatively early on. Fortunately, the heading out mode added a lot of gameplay time. You can set it to just about anything and fly at it. This mode is excellent if you want to take a break from the heading up mode. Adds a nice dimension to the game.

What I will say about this game is that this is one of the more mentally taxing games I’ve played. So, unless you don’t mind the headaches after a while, breaks between rounds is definitely recommended.

So, with the variety found in the game from the different elements and the two different modes, it’s pretty easy to not get bored with this game. While the difficulty curve is fairly steep, it’s also very consistent. The learning curve, meanwhile, is quite reasonable. The only big problem with this game is that it is mentally taxing. So, frequent breaks is recommended.

The graphics are fairly decent. There is two modes of play to be had – angled and birds eye. Angled adds some shadows which obscures play a little. Birds eye just eliminates the shadows. What you see otherwise is not altered. The graphics are pretty decent. While not amazing, they aren’t bad either.

The audio is a weakness for this game. The levels consists of mostly of the same music and can be a little repetitive. The limited sound effects only add some small dynamics to the audio, but that’s about it. While menu and intro music is different, I’m not convinced it’s enough to be passable.

Overall, this is a fairly decent game. While it isn’t something to get all excited over, it is a very good brain teaser if you want one. The different elements help give this game so many different kinds of puzzles, you can’t really get too bored with it. The difficulty is, though consistent, fairly steep. The weakness here is this game is also mentally taxing, so breaks are recommended. The graphics are decent, but the audio is weak. Definitely a game for puzzle fans.

Generally beat the easy puzzles during heading out mode.