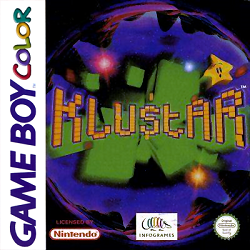 In this review, things collapse inward in the Game Boy Color game Klustar. We find out how well this puzzle game plays.

What you get in the game depends on what settings you set. Type 1 gives you unlimited play. Type 2 challenges you to get a certain number of clusters. Get those clusters without dying and you win the game.

When you get into a game itself, you’ll get a single block node. Various pieces will move in all four directions. You need to “catch” the pieces with the center node. If you catch a piece, it will become part of what you move around the screen.

The goal is to form clusters. To do so, you need to basically fill in 3×3, 4×4, or 5×5 blocks. Doing so will cause the block to disappear and the other remaining parts to fall inwards. The more pieces fall, the closer you get to moving up to the next level.

If you let a piece go by, it will stick on the edge and become unusable. This edge piece will also restrict your movements.

In addition to moving your cluster around, you can also rotate it with “A” and “B”. Sadly, you can’t rotate the pieces that are falling.

You die either when the cluster becomes too big for the screen or the missed pieces prevents you from moving.

There are various options you can set before the round begins. You can set which level you wish to start on (which determines how fast the pieces fall).

In addition, you can set the piece size. The smaller piece will give you mostly Tetris-like pieces. The larger one will give you some larger more mutated pieces.

The collapse grid determines how big the clusters need to be before they disappear. Counter-intuitively, this doesn’t affect how the remaining pieces will collapse inward.

This is one of those games that I simply don’t really “get”. I understand how to play to a reasonable level, but I don’t understand the real point of it all. I simply found myself forming clusters and seeing levels go upwards. As I leveled up and got clusters, I found myself saying, “Uh, OK. I guess that’s good.”

In addition to this, the games are generally very short. Nothing is there that really rewards good play or anything. You just get a very basic “Game Over” screen or a “You Win” screen at the end of the game. So, that part is very anti-climactic.

This game is very abstract. I’ve played abstract puzzle games before such as Qix and enjoyed the experience. In this case, the abstract nature is just strange to me here.

The good part about this game is that it’s pretty easy to figure out and the difficulty curve is pretty good as well. Beyond that, I don’t really see any positives here.

Generally speaking, this is a very strange game. It’s abstract, but not very entertaining as far as I can tell. While the various options do give a little variety, this game is exceedingly simplistic in some regards. The limited movement capabilities don’t help much (not being able to rotate pieces as expected). While it is easy to understand and the difficulty curve is pretty good, the length of the game leaves a lot to be desired. A game I can only look at and go, “What just happened exactly?”

As far as graphics are concerned, this game is probably the worst showing I’ve ever seen on this system. There is very basic colors on the blocks that move along a white background. The colors on the pieces also change randomly, leaving you with little predictability. The extent of the special effects are slightly changing textures in the blocks and flashing whenever you get a cluster. Meanwhile, the menus are not much better with very stark and bland options on a white background. It would have been nice to see, say, outer space backgrounds or even underwater backgrounds. Something to add punch to the game, but there just isn’t anything here. A very poor performing game for me.

The audio isn’t much better. The music is a mix of public domain music and music that just doesn’t add anything to the game. The sound effects are extremely basic as well. Not much to be had here.

Overall, this game has very few redeeming features. The only positives I could come up with is a reasonable learning curve and difficulty curve. beyond that, the game is extremely basic, abstract, and just plain strange. It’s like the developers wanted a game with falling Tetris pieces coming in all directions and ended up with this. I’m surprised this made it past the conceptual phase, let alone made into a real game. It’s not very entertaining. The graphics are extremely poor and the audio, being the strongest feature in the game, is also pretty weak. I definitely do not recommend this game.