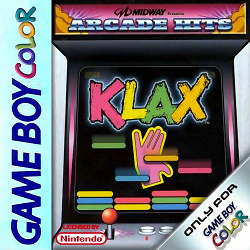 In this review, we line up the tiles in the Game Boy Color game Klax. We find out how well this puzzle game plays.

This game was released in 1999. It is a port from an arcade game.

There are basically two game modes to be had here: normal and freestyle. You can use the option of a password or fiddle with the options in the start menu as well.

Freestyle is just like the regular mode, only you get unlimited drops as well as a relatively easy rate of tiles coming at you. You lose if you fill every Klax space on the bottom and score doesn’t count. So, in short, it’s a practice mode.

The regular mode allows you to take on the 100 waves available in the game. The difficulty is determined by what you set in the option. If you score high enough, you can enter your name in the respective hall of fame lists.

You get a choice from three different waves to warp to. You can start at the beginning with wave one, but you’ll only get 3 drops and no bonus points. Alternatively, you can choose one in between that allows you to earn some bonus points and allows you more breathing room with four drops. You can choose the hardest one which awards the most bonus points and gives you a better chance with a whopping 6 drops.

So, what does this all mean exactly? This brings us to the game field itself. You basically work with a conveyor belt. You have a holder with a single tile on it. There is a choice between dropping the tile into the final playing field below or simply waiting for more tiles to come rolling at you down the conveyor belt. You can hold 5 tiles at a time, but after that, you have to either drop a tile or expect to start dropping tiles.

If you drop a tile, this counts towards your “drop” count. You can drop tiles either by trying to catch tiles with the maximum number of tiles on your catcher or simply not having the catcher under a falling tile in time. If you fill up your drop number, you lose the game. Your options are to start over or continue on. If you use a continue, your score will reset to zero.

As you catch tiles, you can press “A” to drop them onto the field below. The field below is a 5×5 grid. This is where you complete most of your goals. If you manage to get a line of three tiles with a matching color, then you get awarded a “Klax”. The rows can be vertical, horizontal, or diagonal. Complete a line of 4 and this will count as 2. 5 in a row counts as 3. You can also make the tiles intersect like an “L” or an “X”. This can also count as Klax’s as well. Getting larger Klax’s means more points.

Another way to earn points quickly is to perform gravity chain reactions. If you get a Klax, the tiles that are on top will fall into the new empty space below. If they, in turn, form a Klax, you’ll earn multiplier bonuses a well.

Of course, in order to beat rounds, you need to succeed in getting to certain goals. The goals are tracked by the banner on the bottom of the playing field. This will keep track of how many Klax’s, tiles, or points you have left to beat the round. If you keep earning Klax’s in ways outside of the goal, you’ll earn points and give yourself more breathing room, but you won’t be any closer to beating the round otherwise.

As you can tell, you can formulate certain strategies with the fact that you can hold 5 tiles at a time. You can hold one color that doesn’t do you much good initially. As you store that tile, another tile that is more helpful may roll down the belt. Remember, when you drop a tile, the game will always drop the tile on the top of the stack.

In earlier waves, you’ll get to deal with the fewest colors of tiles. In later rounds, the difficulty will increase by introducing new colors. These colors include dark green, light blue, or even black and white. As things get more complex, you’ll eventually see a flashing tile. This is the only special tile in the entire game. This tile is basically a wild card tile. You can place this tile inside any Klax and it will count as a matching tile. You even earn the points that goes with a normal Klax on top of it all.

There are two “advanced” moves you can perform. The first is tapping up on the D-pad. Doing so will allow you to flip the tile back up the conveyor belt so you can temporarily get it off of your catcher. The practical use of this is the ability to juggle the order of the stack. If you have the tile you want three tiles down, tap up twice and , voila! You have your tile ready to do. The downside to this is having to catch all of those additional tiles after, so there is risk in using this technique.

The other advanced move is tapping down on the D-pad. This allows your tiles to move down the conveyor belt faster. This is very useful for reducing the waiting periods for new tiles.

If you beat the first wave, you’ll earn the bonus points offered at the “warp screen” (easiest wave being the exception to this rule). From there, your goal is to complete the remaining four waves before making it back to the warp screen. From there, you can choose from the additional 3 waves. You can go after the same bonuses and drop allowances, only you get to apply this to the next bunch of waves.

If you make it up to wave 90, these options (as well as bonuses) disappear. You’ll be stuck with 3 drops and you must complete the last 10 waves one at a time all the way up to wave 100. Complete wave 100 and you not only earn 1 million points, but also get the finishing screen that congratulates you on beating the game.

One of the biggest strengths in this game is that certain level of uniqueness to it. It’s certainly unlike any game I’ve played to this date thus far. This is pretty much where my praise for the gameplay itself ends, though.

After a few rounds of this game, the novelty simply wears out. When that happens, either this game gets annoyingly difficult or just plain boring. The game punishes the gamer with repetitive play with each passing moment. The more you play, the more boring and repetitive this game gets. There were actually times when I forgot what I was doing for periods of time just because of the mind-numbing tedium that is this game. Had I not been trying to thoroughly review this game, I definitely would have switched off this game long ago. The further you play, the more mind-numbing this game gets.

If you think the play in normal mode is mind-numbing, though, just try playing Freestyle mode. This game mode removes almost all of the risk of losing and the reward for performing well. You basically play this mode until you get bored and either throw the game or quit.

One of the few things this game gets right is splitting the halls of game by difficulty. It’s surprising the number of games that don’t bother doing this and I’m glad to at least see it in this game.

Generally speaking, you get your learning curve, and novelty of playing a relatively unique game. Unfortunately, once the novelty wears off, the game starts becoming boring and repetitive. The more you play, the more boring and repetitive this game gets. The exception to this rule is if the difficulty is moved up and you can’t keep up. At that point, the game is simply annoying. While the split in the halls of fame is nice to see, it’s really hard to find upshots to this game. I’m not one of those reviewers who exaggerates things, but this game is better served as a sleep aid. I could feel my eye-lids get heavy playing this one.

The graphics are pretty hit and miss. On the plus side, there is some decent freestyle-like art in the menu’s. In addition, the changes in settings are pretty decent as well. The perspective works quite well too. The downside is that there is still plenty of blank space to be found in this game. The warp screen almost looks like something out of an Atari 2600 game. very stark and plain.

The audio is strangely very weak and contains some of the best elements in the game. The lack of music in the play itself makes for some very dry play. The limited music can only be found in the menu and end cutscenes (which most players will never hear anyway). The music itself OK, but nothing special. Meanwhile, the sound effects work pretty well. The voice samples are especially impressive to hear in a game like this. The variety in the sound effects from the tiles has a nice amount of variety. So, it does save this game somewhat and makes it a very average audio experience.

Overall, this game has a few strengths for players just starting. It has a rather unique style of play and there is a certain degree of novelty to be had. Unfortunately, the honeymoon of these two elements is short lived and is replaced by mind-numbing tedium. It’s bad in normal play and even worse in the freestyle mode. The graphics are fairly hit and miss and the audio is only saved somewhat by the sound effects. With a game that has virtually no replay value, I’d say this game is a flop.

Overall
Furthest point in game: Died on wave 12 on Medium. Beat the game on easy.