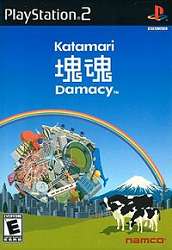 Our reviews are now taking us to the Playstation 2. This video game, Katamari Damacy, is probably one of the most unique games I’ve ever played. This puzzle game features the goal of rolling up pretty much everything on the planet for the purpose of recreating the cosmos.

This game was released in 2004 and was the result of a school project and made for less than $1 million.

The game starts with a little bit of training. Then, the player is eventually sent to the earth to re-create various stars an other features of the universe. Apparently, the king of all cosmos went on a binge drinking spree and destroyed all sorts of things in the universe. The player plays the Prince who is sent to the Earth to roll things up in a “Katamari”. There is a time limit to get a certain size, but the maximum size depends entirely on what the level has to offer. If a certain size is achieved or a size is achieved in a certain amount of time, extra awards are earned (not to mention various presents that are seen throughout the game in each level).

I have to say, this game made me suspicious about whether or not I’d enjoy it. It wasn’t exactly attractive to me at first, but once I actually played the game, I had a lot of fun with this. Perhaps what really got me hooked was when I managed to roll up my first office building. This is the kind of game, for me, that really grows on you. The more you play it, the more enjoyment you can get out of it.

The graphics seem to be OK at first. The objects are rather blocky at first, but then you realize just how large you can get and, in the process, realize just how much work was put in just to make every single object that can be collected. Because there’s so many objects involved when you get towards the end of the level, it’s impressive how well a processor can hold up keeping track of all the objects attached to the Katamari.

The audio really added to the game. The music really gave the game feeling and the sound effects can range from interesting to hilarious. The music is not necessarily your typical everyday game music and can stand on it’s own if you want something to lift your spirits.

Overall, I’ve grown to like this game. It’s unique, refreshing, fun and humorous. To me, that can be a winning combination. Play through the game once, and you’ll quite likely be a fan by the end.

Overall
Furthest point in game: Made the moon and achieved a few special goals after for fun.