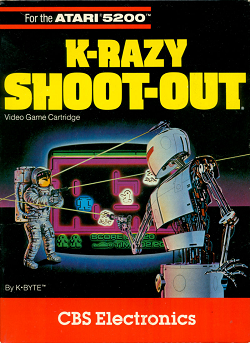 In this review, we ready our blasters as we play the Atari 5200 game K-Razy Shoot-Out. We find out how well this top down shooter plays.

The opinion of others is that this game is basically a clone of the game Berzerk. It’s easy to see why.

In both games, you are pitted against robots in a maze with walls that will kill you. Probably the only real difference is the fact that the playing field is a bit more complex and larger.

There are doors on both the left and right hand side. If you defeat all of your opponents and then leave, you’ll get a tally of what you managed to kill off. After that, you’ll be moved to the next sector. If you left a few behind, then you’ll be booted back to the previous sector to finish the job – with no points awarded for kills.

You also apparently have a limited supply of ammo in this game. How much ammo you have, well, the game doesn’t say. All you know is that you randomly just run out of ammo. Sometimes, you think you ran out of ammo, but you are able to fire a shot or two after a few failed attempts to fire the weapon. I suspect that this is just a bug in the system more than anything else.

You have three lives. For every life you lose, you’ll get treated to a long drawn out animation where the icon runs a small distance, than falls over. This is a feature in the game that I think is unnecessary and annoying.

Generally speaking, it’s hard to find any real sense of originality here. With a buggy gun and no indicator of how much ammo you have left, this ends up being a bad clone of a decent game. While the action of quick reflexes are still present, that’s about the only thing positive this game really has to offer.

The graphics are extremely basic. The only thing that can be positively said is that the walls change color for added variety. Beyond that, it just makes this clone have a tacky feel to it.

The jingles are pretty cliche. The sound effects are also extremely basic.

Overall, this game comes off as a fairly tacky clone of Berzerk. While the mazes are bigger and more complex, you have to look hard for any sense of originality here. The weapon system is buggy and the limited ammo with no indicator just makes the game that much more poorly thought out. The death sequence ends up being annoying. The graphics are very basic and the jingles and sound effects don’t quite stack up. Overall, I’d say that this is a game best left forgotten.