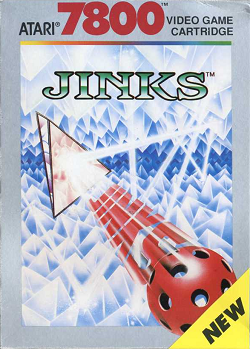 In this review, things get bouncy as we play the Atari 7800 game Jinks. We find out how well this puzzle game plays.

Jinks is a pretty difficult game to describe. One way to describe it is as a sort of re-imagining of a pinball game with elements of Breakout thrown in.

You control a wide triangle. With a button, you can flip the triangle around so it points up. This way, it is possible to get some side-to-side motion with the ball. Meanwhile, the flat side can allow for giving the ball extra bounce in the direction it is traveling. The goal is to take a bouncing ball and guide it to the goal on the right hand side of the level.

Along the way, you can hit destructible bricks. Each brick is worth a small amount of points. In addition to this, you can collect items for points. These items include globes, light bulbs, 100 point drums and a few other flashing objects. There is one particularly special power up, however. This is the ball checkpoint. If you hit the icon with the bouncing ball, this counts as a checkpoint. If you lose your ball later, then you warp back to the checkpoint instead of losing the game completely. Valuable because you otherwise only have one life in the entire game.

There are also things that impede your progress. These can include basic angle objects, enemies, and ball modifiers. Most enemies only affect your triangle. If your triangle touches one of them, the triangle shrinks. This makes ball handling more difficult. One enemy to definitely watch out for is the teeth. If the ball flies into the teeth, you lose your ball. Game over if you didn’t hit a checkpoint.

If you manage to make it all the way to the end of the level and guide the ball into the warp, you’ll be teleported to the “interlude” level. In this level, you just have one screen and 4 numbers. Each number represents a level that is available in the game. You can repeat levels, skip over to later levels, or whatever you like. The only challenge here is guiding the ball to the level you want. The process repeats until you are unable to complete a level. There are only the four levels and interlude area in the entire game.

One thing is for sure, this is definitely a different game. Some games that are very unique can be a big hit while others just make little sense. In all honesty, I don’t entirely know what to make of this one. It wasn’t a terrible or boring game by any means. At the same time, it wasn’t a game I was absolutely thrilled to play. I’m kind of middle of the road on this one.

A problem with this game is the ball physics. In level 3 and 4, the ball seems to “climb” up the underside of the level teleporter at times. It also has a hard time with diagonal ceilings from time to time. The ball interacts strangely with the triangle whenever it is pointed up. On occasion, if the ball overlaps with the triangle, it will randomly teleport to another part of the level. So, keep in mind that the ball physics are far from perfect in this game.

Overall, this is definitely one of the stranger games I’ve played. It was neither a bad or good experience for me. One impediment to this game is the fact that the ball physics aren’t that great. The game also loops around until you lose. After a while, this makes for some repetitive play.

Graphically speaking, this game has its share of problems. While the wall textures are OK, it can get in the way of play. It is often hard to tell if something in the field is something that interacts with the ball or just an aesthetic. It is also somewhat lower quality compared to other games released at the time.

One great aspect in the sound side of things is the voice sample. It was interesting to hear it at the beginning. The music both in the intro and on the top scores board after you lose aren’t bad. Unfortunately, all you get in the game itself is just a small handful of repetitive sounds with the ball. It can make for some bland gameplay at times. The jingle between levels isn’t bad.

Overall, this is a rather strange game. It’s probably an example of developers taking a risk and finding out that it doesn’t always pay off. With bad ball physics and graphics that makes things confusing, this game certainly isn’t one of the greatest games I’ve ever played. The voice sample was great and the little bits of music wasn’t bad, but in-level sound is pretty bland. Overall, it was an OK game, but nothing big.