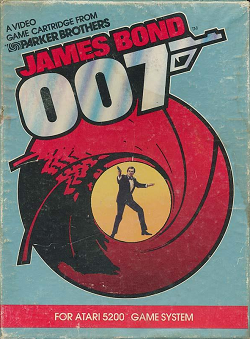 In this review, we take on the role of secret agent in the Atari 5200 game James Bond 007. We find out how well this action game plays.

You play the secret agent as he drives his car through dangerous terrain.

You have two different attacks: The first is the gun that shoots upwards and the second is the grenade-like shot. You only have one firing button, so you alternate between the two shots. A bit of a silly system as far as I’m concerned.

On the first part of this game, you travel on land. This makes the grenade shot pretty much useless. So, you rely on your main gun. You can destroy as many diamonds in the air as possible, but they don’t really have much effect in the gameplay itself in this area.

You’ll encounter various pits that you jump over. You need to press up on the joystick to execute a jump with your car. Do note that you can only go about half way across the screen, so your movement is rather limited in this game.

The second thing to avoid is the enemy helicopters. It turns out that these helicopters are invulnerable, so you need to take on a defensive strategy. The helicopters will drop bombs that create craters in the ground. As long as you are close to the helicopter, it will drop the payload. You can die by the blast wave or the pit it creates itself.

If you survive the experience, you’ll make it to a large lake. The lake is protected by a large sandbar. Unlike the rest of the level, if you touch the ground in that beach, you die. So, you need to execute a particularly difficult jump to make it into the next section.

In the lake portion, you’ll encounter a few additional obstacles. The helicopters do make a return, but all you have to worry about is the shock-wave from the bombs they drop. The bigger threat lurks in the water. There are enemy divers that shoot their pistols at you. A single pistol slug will destroy your car, so you need to move carefully in this area. It’s precisely these enemies that your grenade shot is seemingly designed to take out.

In addition to this are oil rigs. They are invisible to you, but if you shoot a diamond floating around in the sky, the background will flash, revealing it’s location. Yes, the oil rig is in the distance, but touching it means certain death. While difficult, it is possible to jump over this obstacle.

While it sounds like a lot to have 5 free lives, it’s very easy to go through them.

The first problem I have with this game is the respawn system. If you die anywhere in the land area, then you start over at the very beginning. If you make it into the water area, sometimes the game will detect you made it, sometimes it won’t. If you die, you just hope the game remembers you’ve made it into this area instead of kicking you all the way back to the very beginning.

While the land area is challenge, the beach and subsequent water area is very difficult. In fact, I don’t know how far I got, but I seem to have made it a particularly large distance before dying and it seemed as though there was no end in sight.

In addition to this, the floating diamonds are just weird. There is no real scoring system in-game. I do get a number that is denoted by a 1:#### after each life, but the game doesn’t really say if that’s a score or a distance.

Generally speaking, this game has a lot of negatives going for it. The weapon system is strange. The respawn system is buggy. The game is a leans a bit to the difficult side of things. The floating diamonds are strange. Even your movements are restricted to half the screen when it would make sense that you should be able to utilize the whole screen. The screen isn’t going to change speed, that’s for sure. As a result of all of this, it can be difficult to really get into this game.

The graphics are very simple. While the flashing effect is interesting, the land and water is pretty simplified. The enemy sprites are alright and your car is alright. The brief cut-scenes do try to spice things up, but all you get treated to is more or less stick figure Bond and a car with flashing wheels in them. Slightly above average, but I can’t go any higher then that here.

The brief music in the cut-scenes do give this game some audio variety. Unfortunately, there is no music in the level itself and the sound effects are not only basic, but also re-used. Enemy shots use the same sound as your grenade shot. Can’t say it’s passable even though there is some hint of music in this game.

Overall, this wasn’t the greatest game I ever played. The respawn system is buggy, the weapons system is weird, the floating diamonds is strange, and the difficulty is a little bit much. I tried to get into this game, but it just isn’t for me. The graphics are pretty simplified, though the cut-scenes do try to add to the game. There is a small dash of music, but the sound effects are basic and repetitive. A game that is passable, but nothing to get excited over.

Overall
Furthest point in game: Uh, made it a large distance into the water area? Can’t really tell how far I got.
Got the number 1:2,950 if that means anything.