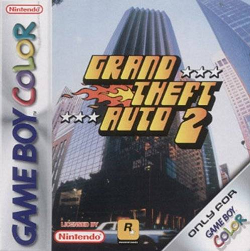 In this review, we join up with the gangs in the Game Boy Color game Grand Theft Auto 2. We find out if this action adventure game is worth a play.

This game was released in 2000. It is the sequel to the original game, Grand Theft Auto. That game, which is the Game Boy Color port of the original, got a barely passable score. So, we thought we’d try the sequel to see if it’s any better.

Once again, you play a criminal. This time, instead of pleasing one gang, you are there to find work among three different gangs. What those gangs are depends on which area you are in.

The major factor that affects gameplay is respect. This respect is denoted by the three meters with the gangs logo. At the start, you’ll have neutral respect for all three gangs. This allows you to take on a simple mission from the gang. If the gang has positive respect for you, the meter will increase. A single notch will allow you to accept more difficult missions while a second notch will allow you to take on the most difficult of missions.

Meanwhile, if the gang has negative respect for you, the meter will go the other way. When that happens, wandering in their territory will mean gang members will shoot at you. Negative respect is often the result of completing an rival gang’s quest or killing their members on the street (in some cases, both can occur). Since the game depends on you completing missions from multiple gangs, the inevitable question will be about restoring respect for a gang.

Often the easiest way is to go into a territory where you already have great respect for (and have completed all available missions) and shooting the gang members on the street. This will reduce your respect in the gang, but also increase respect from other rival gangs. It will also eventually give you the opportunity to earn enough respect to take on a mission from one of the rival gangs too.

What missions become available depends on what missions you complete and how much respect you have. To find out, enter the friendly gang territory. When you do, you’ll get three phone icons. Green represents the easy missions. Grey, meanwhile, represents the medium missions. finally, red phones represent the hard missions. If you get an arrow on any one of them, a mission is available. If you get an “X” on all three phones, no missions from that gang are available.

While this feature in the game may not be entirely clear all the way through, one feature is much more clear: how to accept missions. Like the previous game, you obtain your missions through telephone’s. You start the game with three different arrows pointing in different directions. You can pick a gang and follow that arrow all the way to the telephone. After you accept a mission from the phone, you’ll often (but not always) be guided by a mission arrow. This arrow points you in the direction you need to go. Your further instruction are found in the phone conversation itself.

Items and health have been slightly altered from the previous game. Unlike the previous game, you don’t operate on a one hit kill basis. Instead, you have 5 hits to work with as denoted by the hearts. Run out of hearts and you’ll end up dying. If you are in a car and you send it into the drink or you blow it up, you’ll instantly die as well.

Over the course of your mission, there are also items you can pick up. These can be found scattered throughout the level. The bonus is that you no longer have to bust open crates to find them. They are all out in the open unlike the previous game. One item is the heart icon. This item restores your health completely. Another item is the armor. This item gives you 10 points of armor. For every hit you take, you get one point of armor taken away. So, with full health and armor, you can take 15 hits before dying (instant death being the exception of course).

In addition, there are various weapons you can pick up. This includes machine guns, pistols, rocket launchers, and a whole lot more. If you pick up the same weapon again, you’ll just get more ammo for that weapon. The ammo is indicated by the white line below the weapon in question.

Another notable feature is the felony meter. This meter is located under the portrait. The higher the meter, the more police will go after you. All white means you aren’t a priority while red represents how much police want to take you down.

Controls have their similarities with the previous game. Left and right controls the direction. A moves you forward. Down moves you backwards. Select and “A” gets you out of a vehicle. Select, when you are in a vehicle, allows you to exit the vehicle. While on foot, select allows you to cycle through the weapons you have on hand.

As you complete missions, you’ll earn cash. If you manage to earn over $1 million in cash, an exit from the first area will become available. The exits are found along the edges of the map marked with the word “exit”. When you earn enough money, your options are to stick around and complete all of the missions in that stage or move on to the next stage.

One thing I’ve noticed while playing throughout the game is the surprisingly steep learning curve. At first, it seems pretty straight forward: follow an arrow, get a mission, complete mission, find the code, and move on. That makes for an easy to learn game, right? Apparently not.

Some missions involve honking the horn to get someone’s attention. While a horn button is available on PC/DOS versions, no such button seems to exist. Instead, you have to wait for the prompt to honk your horn. The prompt itself initiates the horn. Meanwhile, if you are moving around or waiting in the wrong spot, the prompt will happen. This leaves you waiting around in the correct area wondering what to do next a lot.

Another problem is that some missions are a little buggy. Sometimes, you are required to park your stolen car in a specific spot. This specific spot isn’t always where the arrow points. This can leave you guessing for a while at times. Sometimes, you have to perform very specific steps in missions which aren’t always clear from the instructions. Again, this leaves you guessing and, sometimes, doesn’t permit you to complete certain missions.

Another confusing element is the respect system. Once you complete a mission, it’s very counter-intuitive to shoot all your fellow gang members, but it is apparently required to keep advancing through the game. This is something I learned from looking it up after all the missions ran dry for one gang.

To further the confusion, the game doesn’t indicate what you should do to exit an area. There are no arrows to point you in the right direction. It just seemingly assumes you know where to find the exits and just tells you when an exit becomes available. This is something I was forced to look up. Even when I looked it up, information was seemingly non-existent about the exits in this version. The only reason I was able to find it was locating it by accident.

While the game is very confusing, one positive is the open world nature of the game. You can tackle this game at any order you like. This what helps make this game interesting in its own way.

An unfortunate side effect of the game is the lack of map or directions to basic things. Are you after a respray of your car? How about locating nearby items? What about locating the exit? For those, you are on your own. There are no maps to help you here. The only thing you have helping you find things outside of missions are the icons on top of buildings. Even then, these finds are little more than pure luck. You just happened to find the respray garage when you needed it. Congratulations. This sort of thing doesn’t happen that often.

Driving has been improved somewhat in this game. There is momentum which forces the car to accelerate a little at first. While the cars do drive too fast at top speed, it’s possible to moderate your speed as well. Having said that, cars do take damage after a while. So, you have to watch out for your car exploding as you drive around.

One persistent problem in this game is getting stuck in traffic. As you drive around, it’s possible to stop traffic. Unfortunately, if your back and front are blocked by vehicles, it can be difficult to impossible to escape. This is especially bad during missions where your vehicle is a critical component.

Generally speaking, this game does feature a few improvements over the previous handheld game. The missions are less buggy. Driving around is a little easier, though still annoying. You no longer operate under the annoying one-hit kill basis. Also, interactivity is a little better. The open world system is still great. Having said that, there are many aspects about this game that are confusing such as exit locations and the way respect works. Bugs only add to the confusion. So, while the basic concepts may be workable, the details really get in the way of having a good time with this game.

The graphics feature a few improvements, but it is pretty touch and go. The strict top down perspective can make finding entrances tricky. The shadows are really your only hints at times. The way things are drawn otherwise is decent, but nothing amazing. Animation is pretty decent. So, it’s not bad in spite of the downsides.

The audio is a weak point for this game. Whenever you are walking around on foot, there is no music. The music you hear while in the vehicles aren’t bad, but nothing too amazing. The sound effects are OK, but are very buggy. For instance, if an enemy gang member is firing at you and you leave the scene, the firing sound sometimes never stops. Even if you are on the opposite side of the area, you still hear that gang member firing. So, the sound is pretty sub-par for my tastes.

Overall, this game does feature a number of improvements over the previous entry. The missions are less buggy. You no longer die from a single gun shot wound. Also, the gang system is upgraded to a multi-faction system which is interesting. In addition, the open world concept is also nicely done. Unfortunately, this game suffers a lot of bugs still in the missions. The respect system and progress can be extremely confusing. The graphics aren’t bad, but aren’t anything amazing. Audio can be plain and, at times, buggy. So, while it is an improvement, this game is still a mediocre play.

Overall
Furthest point in game: Completed a mission in the residential sector. Stopped dead in my tracks when a bug prevented me from completing another mission, though.