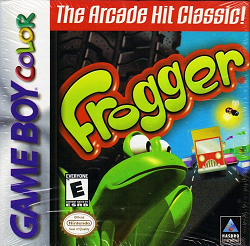 In this review, find ourselves playing on the freeway in the Game Boy Color game Frogger. We find out how well this puzzle strategy game plays.

Since this game is so similar to the Atari versions, we thought we’d focus on the differences in this review.

This game features a menu that allows players to pick between a one and two player game. A one player game is just like the classic Frogger game. You have 5 lives to work with. Once these lives expire, it’s game over.

The two player game, meanwhile, is just like the one player game. The difference is that players take turns for every death. If player 1 dies, then it’s player 2’s turn. If player makes it to the next level, it will still be player 2’s turn until player 2 dies. The game ends when both players lose all of their lives.

Between levels, there is a screen with a single line describing the next level. Sometimes, it’s just a pun joke. Other times, it reveals a hint of what new obstacle players can encounter in the next level.

After all the players lives are used up, the player has a chance to enter their score in the hall of fame. This assumes the players score is high enough of course.

Beyond that, it is the exact same game as the Atari games.

Because of the gameplay being so similar, the game is very short by the standards of handheld games in 1998. You can have your fill in about an hour or so.

While the simplicity and difficulty curve can add to the replay value, it’s hard to come up with anything that gives this game any kind of wow factor.

In terms of innovation, what’s new really only amounts to minor tweaks. So, if you want to play the same classic Frogger you’ve known from the days of Atari, this game does fit the bill. If you are looking for how this game builds on an existing formula to be bigger and better than ever, you’ll be left horribly disappointed. In fact, new gamers who try this game will struggle to really figure out what was so great about this game in the first place.

Generally speaking, this is another game that seems to disregard innovation in favor of purity to the original. As a result, this game is very outdated for the standards expected when it was released. It may put a smile on players who are already familiar with the game, but it will likely be disregarded by most new players. The simplicity and difficulty curve may add replay value, but that’s about all the praise this game will get here. As a result, this game can be easily forgotten.

Graphically speaking, this game is hit and miss. The overall look of the gameplay is better detailed. Some elements really bring this game forward through the years. The pictures thrown in do add some visual eye-candy throughout the game. Unfortunately, some sprites aren’t that well realized. The turtles don’t even look like turtles. The cars are quite basic looking. Since there really is one level that only goes through minor adjustments, the quantity is decidedly lacking. In the end, a very average effort.

The news really doesn’t get any better with the audio. The theme song jingle remains largely intact, but there isn’t much else to be found in this game. In the game itself, there is no music. Just some very basic sound effects will keep you company. The sound effects are alright, but there isn’t much of them to be heard. So, nothing impressive here.

Overall, this is another game that keeps largely to the original game. Because of this decision, it is basically an outdated game. The length of this game really hurts the overall quality. The replay value is there with the nicely done difficulty curve and simplicity, but that’s about the only thing positive to be had in this game. It may please old gamers who are already familiar with the Atari days, but it’s hard for new gamers to approach this game. The graphics are very average and the audio isn’t all that great once you get past the intro jingle. You won’t miss much by not playing this game.

Overall
Furthest point in game: Died on level 7
High score: 19,000 (Don’t know how I managed to get such an even score, but there it is)