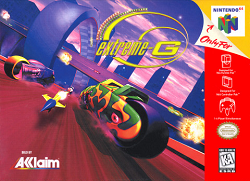 In this review, we check out an N64 racing game called Extreme-G. We find out if this particular game holds out on it’s own when there were plenty of other racing games to be had at the time.

This particular game was released in 1997 and would kick of a series that seems to have ended just 6 years later.

The game features a number of modes including three single player modes, a multiplayer mode, and the main extreme contest. Probably my favorite mode in single player mode is shoot-em-up where you have a constant stream of weak bots racing ahead of you and the goal is to kill as many of them as possible before your three laps are over in a given track.

A vast majority of the action, however, occurs in the Extreme contest. You have three different championships: Atomic, Critical Mass, and Meltdown. Atomic is the easiest of the three given that it contains the fewest tracks and the least stringent championship point requirements. Meltdown is the hardest with the most number of courses you have to race through and has the tightest placement requirements in the game (even with placing first place over and over again, you won’t be totally safe until at least the last portion of the championship. From there, you have three difficulties: Novice, Intermediate, and Extreme. As you can probably guess, you earn the best stuff on the Extreme difficulties including the “super bikes”.

You can earn stuff with the Super Bikes, but they tend to be merely secret codes you can enter. Winning with a super bike will always yield the message at the end of the race telling you to try winning wit a regular bike. It can still be fun to race with a super bike. If anything, it’ll allow you to get used to the tracks in the championship scenario before you try it with an inferior regular bike.

Each of the bikes you have to choose from have their own strengths and weaknesses. Some have fast acceleration while others have tougher armor. Overall, you have to try and pick that plays to your strengths and weaknesses. If handling is your biggest problem, then try a bike with more armor. If you can avoid enemy fire, try finding a bike with a better top speed. You’ll know what will feel right when racing.

Each race has it’s own interesting elements in the mix. One of the most noticeable elements on the race track are the numerous weapons you can pick up. In the beginning races, you can pick up basic weapons including dumb rockets, heat seeking rockets, an interesting rear fire rocket, ion side cannons that prevents passing, and a mortar (not sure why it also has an “R” on the pickup icon, but I digress). Another item pickup is the sphere object which replenishes your shield. If you’re low on shield, try and pickup a few of these if possible. Combined with these weapons you can pick up is your main weapon. What your main weapon is depends on the bike. Sometimes, it’s an energy pulse weapon. Sometimes, it’s the laser. Each bike has it’s own main weapon. In any event, you have a limited supply of this weapon throughout the race. While these weapons aren’t quite as powerful as the weapon pickups, you can still, at least, slow other bikes down by firing this weapon. Especially useful if one bike decides to try and pull ahead by using a boost. Your weapon supply is restored when you cross the star/finish line.

You also have three Nitro’s at your disposal. These nitro’s have to last you the entire race. Ideally, you should try and find a nice straightaway on the track to use these so you can spread them out one for each lap. This will allow you to get the most out of your nitro because if you happen to be behind, you can use all the speed boost you can get to make ground from them.

The tracks themselves gradually become more and more complex as you race them. The first race merely contains the odd jump here and there mixed with a few twists and turns. By the time you race the later races, you’llfind yourself racing through dizzying corkscrews and loops. Sometimes, you’ll even be racing upside-down and seeing other racers above you on the ground. Really, there are reasons why this game has the word “Extreme” in the title.

What’s also noticeable in later races is the fact that the weapons become more complex. You can pick up flares, a flame exhaust, and even an electromagnetic pulse that temporarily disables all of the bikes ahead of you. Even the weapons you found at the beginning are improved like the dumb rocket. On the beginning races, you tend to get one or two at a time. By the end races, you can find a rocket pickup that actually contains a whopping five rockets.

One thing I liked was the fact that this game does use zippers. Unlike other games, however, the zippers displayed in this game are cylinders of rising red smoke rather than the comparatively unimaginative painted arrow on the track. I thought that this was creative compared to other games that were floating around at the time.

One criticism I’ve heard is that the game is too fast. This stems from crashing into the walls. Personally, it’s rare I’ve encountered a racing game where I didn’t find myself crashing into the walls in the midst of getting used to the controls. I think this is more to do with getting used to the controls of a racing game that takes you over 300MPH more than anything else. Really, it could be worse in this area – just give one of the Wipeout games a try. If you ask me, there is a positive in this are in that you take far less of a speed penalty when you crash into a wall compared to some other racingg games.

Graphically, I thought this game was pretty well done. There’s plenty of environments you’ll find yourself racing through such as scrap yards, forests, and area’s with lava. The graphics hold their own given the huge variety that is found here. There’s even added effects that really gave this game its own style. I think that the graphics aren’t perfect, but quite nice.

The audio, I think, is where this game really shines. The genre of music this game follows was perfect for this style game (very fast paced racing). The only genre I can think of that would also have worked is Drum N’ Bass music, but I think this was ultimately a better choice given how well done the music was. The sound effect from the manu selection sounds to the explosions that add a nice layer of carnage really helped make this game pop. I can’t honestly think of a single complaint for this game in terms of audio.

Overall, this was a great racing game. It allows players in the beginning to get used to controlling their bikes in the beginning and really challenges you by the end. A nicely done difficulty curve, reasonably solid graphics, excellent audio, high end replay value, and great variety really makes this a great game to play.

Furthest point in game: Earned all superbikes and completed all championships.