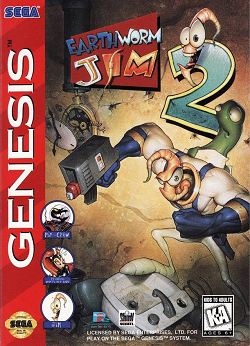 In this review, we take on the evil goldfish in the Sega Genesis game Earthworm Jim 2. We find out how well this adventure game plays.

This game was released in 1995. It is a sequel to the game Earthworm Jim.

The story in this game is that Princess What’s Her Name needs to be rescued by Earthworm Jim. Of course, standing in his way is his arch-nemesis, Psy-Crow.

When you start, you have your whip attack, your gun (which replenishes up to 100 bullets), and Snott the sidekick. Both your whip attack and gun can be used to take down enemies, though you’ll likely find that the gun makes things easier in a number of different circumstances. Snott can help you out with general movement. You can use Snott to slow your descent with the parachute ability or you can use the Snott swing ability if there is mucus on the ceiling.

Along the way, you’ll encounter a number of different item pickups. Some of these items, I’m not exactly sure what they do, but the Jim icon is a free life. The little blue sparks restore a small percentage of health. The red spark item restores a large chunk of health. Bullets replenish your ammunition. You can also obtain other guns which have different abilities.

The three way gun helps you hit enemies more often. This is a rapid-fire gun that grants you a fair amount of ammunition. Another gun is a mega weapon. This weapon can be found in the beginning level. It will wipe out any enemy on the screen in the direction Jim faces. The only side effect is the fact that it temporarily stuns Jim. In addition to this, there is the heat seeking weapons. The bullets fired from these guns will search for an enemy or destructible on the screen, fly to it, an explode. A particularly worthless gun (at least as far as I know) is the soap bubble gun. The gun has a limited ammunition supply and makes a series of bubbles that float harmlessly upward for a short distance. No idea if this has any real practical use, though.

A lot of the levels contain the basic adventure elements. Move from one part of the level to the other in order to advance to the next level. The thing with this game is the fact that there are a couple of different objectives Jim needs to complete along the way. Some objectives include using a drill gun to blast through soil. Another objective is to transport pigs or cows from one location to another to free up a bottleneck passage.

What spices up the action in this game is the fact that there are other levels where the game effectively changes for a level.

The one level that repeats three times is the Puppy Love levels. In this level, you must carry a giant marshmallow. Psy-Crow will throw pink puppies from his house. Your objective is to bounce the puppies across the courtyard to the other side where a dog his holding a funnel. You have a limited number of puppies that can hit pavement. If you deplete your misses, then the dog will attack you, ending a life. There are four rounds. In order to complete a round, you must successfully transport the bomb from one side to the other. The dog will grab the bomb and throw it into Psy-Crows house, ending the round. Complete all four rounds without missing too many puppies to complete the level.

Another level is the flying level. One button will allow you to fire your weapon while another will allow you to turn around. The objective is to bounce a hot air balloon carrying a bomb to the end of the level. Along the way, you can collect engines that speed up your ability to move around the screen. Along the way, pigs will be launched at you. You can have a maximum of two pigs hanging on to your rocket. The effects are that you will slow down. You’ll also lose health. Turn around multiple times to shake the pigs loose.

One thing I was warned about with this game was that it is a tough game. I’m personally unsure of that criticism. A lot of the levels are more annoying than difficult. If you practice a little each level, it’s more than possible to get the hang of it. If this game operated on a 3 hit kill basis I would definitely agree, but the health afforded to players makes this game beatable.

What I did find about this game is that the weirdness factor is certainly up there. While it is certainly possible to understand the game, I definitely had a few moments where I would ask what the heck is going on. Some of it is funny, but other parts are just strange. The bizarre nature of the game does distract from the overall experience a bit.

Another problem with this game is the fact that large chunks of this game operate on completely different rules. One level sees you floating around, others have you bouncing puppies, and two levels feature Jim flying through the air. The varied nature of this game actually winds up getting in the way because it doesn’t really congeal together. Instead, I found myself simply learning from scratch every other level. While I can appreciate packing a game full of features, it is possible to overdo it as this game demonstrates.

Still, an impressive element of this game is the fact that the learning curve somehow stays relatively low. You may find yourself expending a few lives in the process, but once you get the hang of the basics in the levels, the game becomes more than playable. In fact, many levels can be easily learned in a single free life.

Generally speaking, this game is quite feature rich. There’s a lot players can get out of this game. The learning curve is also decently shallow, so players can definitely jump into this one. The varied levels ironically detract from the game because you are constantly learning from scratch. Also, the overall strangeness is a bit too much as far as I’m concerned. A decent game to play, though this game does have its pitfalls.

Graphics is probably the biggest shining spot for me. The characters are all very nicely animated. The animations really punctuate the cartoon nature of this game. The different levels are also very well detailed. Not only are levels highly detailed, but they are also very different. This makes the game an eye-candy filled journey from beginning to end. Sometimes, it’s hard to figure out what ledges are there that Jim can grab onto, but it’s still a very nicely done game all around.

Meanwhile, the audio depends a lot on classical music. While it makes the game surprisingly decent in this area, there’s not a whole lot that makes the game stand out from a music perspective. The sound effects, however, really add to the game. Everything about the cartoon nature is only enhanced by all the cartoon sounds. It’s because of the impressive selection of sound effects that this game gets more than just a passing grade here.

Overall, this is a decent game all around. The absurd nature does distract me a little from the overall play. In addition, the varied levels have me constantly re-learning the game from scratch. Still, the learning curve is certainly low enough that everything can be learned in a respectable amount of time. Some people criticize the game for overall difficulty, but I found that the game is more annoying at times than simply being difficult. The graphics, however, are impressive with the cartoon style. The music is decent enough, but the sound effects really shine through here. A very decent game if you ask me.