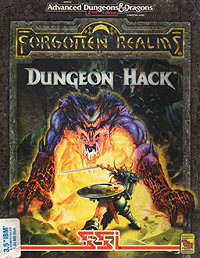 Dungeon Hack is a first person rogue-like dungeon crawler. We take a look at what makes this game tick and see if it’s worth playing years later.

Dungeon Hack is a game that was released in 1993. It is based off of the rules of Dungeon’s and Dragons, 2nd Edition and borrows heavily from other games such as Eye of the Beholder.

The story-line is rather crude. You are an adventurer and a mysterious magical woman (I’m guessing mage) has summoned you. She tells you of an orb that was lost and can be found in a particular dungeon. After she explains that the riches of the dungeon below would be payment, the adventurer is magically sent to the dungeon before there is any chance of hesitation. Once arriving at the dungeon, the adventurer vanquishes a foe on the bridge and then dares the dungeon to do it’s worst before entering.

The game allows the player to create an adventurer before entering the dungeon. After the player rolls and modifies some of the statistics, the player can then select the difficulty of the game. The difficulty can affect how much food is available, the number of false walls, number of enemies, the depth of the dungeon and a whole lot more. The game also features a custom difficulty where these variables can be manually altered.

Inside the dungeon, the player can immediately note that, along with the health, there is a “food” bar. In order to survive, this bar must be infrequently replenished. The character can recharge the health after several battles by resting in a camp, but at the cost of some of the food in the “food” bar. The amount of food that is used up depends on how much the character chooses to rest.

Another aspect of the game is the fighting dynamics. The player has to manually either swing a weapon or cast a spell by clicking on the appropriate icon next to the image. What the player yields depends on what the player equips. If the player equips a holy item (should the character be a magic user), then a spell list is then brought up. In that list, the player can heal themselves or cast an offensive spell during a fight.

After the player gains enough experience, the character can level up. This can raise the overall maximum health the character can get (I haven’t had a level up that raised anything else, actually). Other stats can be raised if the player is fortunate enough to come across the right book.

One particular feature of this game that is most notable is that dungeons are completely random. While the monsters are typically matched with the levels the character is on, the overall look of the dungeon varies wildly. This is because the dungeons are randomly generated through “seed” dungeon strings. You can have rocky surroundings with bars for doors or you could have some strange somewhat sci-fi look with glass doors to open. Every game the player plays is drastically different and the experience of the player is always new with each new play through.

One of the pitfalls I find in this game is that the overall gameplay itself is somewhat crude. One example of the crude gameplay is that I was able to make it to about level 4 of the dungeon before I was able to accumulate enough experience to gain a single level character. That means that if you start the game with a level 3 fighter and a level 2 cleric, you’ll still have a level 3/2 character by the time you are exploring the third dungeon level. I felt this to be somewhat annoying because the monsters keep getting harder, yet the character was barely developing at all.

Another part of the crudeness of the gameplay is that whenever the player sees a new element in the dungeon, the game grinds almost to a halt as it loads whatever asset there is in question. This includes blocked passageways, wall fixtures, or even the monsters itself.

The grinding of the game is also found within a fight itself. Sometimes, you can click on either a swing or to cast a spell and, because the game hangs for a second at times, the click isn’t registered. While the the controls are somewhat laggy, the monsters ability to fight are not hampered by the lagginess. This is especially annoying when the monster has the ability to paralyze you. If you run up to the monster in question and click to swing, sometimes that click isn’t registered. Meanwhile, the monster has had ample time to swing once to paralyse you, causing you to lose your ability to fight and the only thing you can do is run away (while paralysed???).

Another pitfall I found was the resistances were hard to come by. One monster happened to have the ability to petrify you and I was only able to defeat the monster because I happened to find a scroll that cast that resistance. That was the only scroll I had that fit the battle. If that resistance wore off, I had no defence against the “ista-death” attack.

Adventuring can be somewhat problematic at times. After adventuring on my second attempt through the dungeon, I quickly realized I was “stuck” in that if there was a secret door I’m suppose to activate, it’s way too well hidden even after examining each wall near a room or a hallway touching an unknown area of the dungeon. The only thing left to do is either gain experience to get another spell or just start over again. Either way, some switches are just way too well hidden.

Some monsters just have the ability to evade every attack even with an upgraded weapon. I found projectiles to be an excellent substitute to a long sword as the darts seem to have a better chance at hitting. Of course, if you are a cleric, once you have the chance to pray for a Spiritual Hammer spell, get that weapon as it’s apparently the best weapon you can get in the game. This pretty much makes the game much more playable as you actually have a fighting chance against some monsters. It doesn’t make the game dirt simple to beat, but it does make it far less than impossible.

Also, and most importantly, save strategically. Save when you aren’t boxed in to a corner by monsters and when you feel you can easily have many ways to get out of any possible jam. if you die, this is only a minor setback if you save frequently and strategically. for some reason, saving takes little time, but restoring takes a while. Loading each level is also just as slow if you find the stairs down.

What’s impressive is the graphics. They aren’t absolutely “jaw hitting the floor” amazing, but the pure variety the player can get is quite impressive that I can tell.

There’s only one song that I’ve heard in the game and that’s heard at the beginning during the cut scene. It doesn’t really get a chance to get annoying, so I have few complaints about it. The sound effects are not bad because sometimes you can hear the monsters scream from nearby. Considering the size (in terms of disc space) of the game in general, I thought the sounds weren’t too bad.

Overall, this isn’t a terrible game. It’s kind of fun to play as a unique diversion for a few hours over the course of a few weeks, but the mechanics of it all do get old after a while. So the replay value is moderate with major pluses in the randomness of the game, but major negatives in the crudeness and sometimes lagging of the game itself. This game will be good if you are already a fan of rogue-like RPG games or dungeon crawler games, but if you aren’t into RPG games already, this game’s charm will probably wear off on you after a while.

Furthest point in game: Made it to Dungeon Level 5 on easy as a Warrior/Cleric.