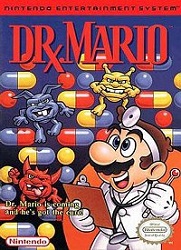 Released for the Nintendo Entertainment System, Dr. Mario follows a long line of puzzle games that involves controlling falling objects inside a receptacle. Is this game worth trying out?

Dr. Mario was released to the Nintendo Entertainment System (NES) in 1990. The game does take an existing concept of controlling falling objects made famous by the seemingly immortal game “Tetris”, but it adds an interesting twist to it. Instead of matching up lines, you are matching up colours whether it is up and down or left to right.

The object of the game is to eliminate viruses by matching the virus colours to the colours of the pills being tossed into the container by Mario. Eliminating all the viruses means you’ve beaten the level.

When you start a new game, you can decide on what level of difficulty you want to attempt. Each virus level determines how many viruses populate within the playing field. Fill up the playing field and the viruses win. Eliminate the viruses and you win. Starting at virus level one can yield a mockingly easy playing field of about 4 or 6 viruses. While seemingly silly, if you’ve never played the game before, it’s actually not a bad way to start off so you can start getting use to strategy of this game. You can also choose how quickly the pills will fall. This can help increase your score if you are good at this game, but it can also help you lose the game faster as you have less of a chance to get the pills placed in strategic locations of the playing field (you’ll probably figure out what I mean when you play this game for yourself).

One of the interesting features of this game is the fact that when you play single player, oversized versions of the viruses are dancing in the corner under a magnifying glass. While this adds little in the way of game strategy, it does add a certain level of personality to the game which makes it a little more charming in a way. Each time you eliminate a blue virus, for instance, the blue virus in the magnifying glass will fall on its back and flail around for a moment. If you eliminate all the blue viruses, the blue virus will not only flail for a moment, but also vanish in the process. I thought this was really a nice touch to this game.

The graphics are decent enough in this game. The design of the viruses were quite well done because they are distinct from each other, yet all have the same sort of mocking “baddiness” to them. You can easily feel comfortable with the overall graphical design because you can either look at every bit of the detail, or just melt into the game. Either way, the graphics are neither distracting or annoying to me.

The audio isn’t exactly perfect, but it isn’t completely horrible either. Perhaps the biggest fault in the audio department is the lack of ability to change the music part way through play. If you are gunning for a high score and you start from the lowest level possible, the music, at first, makes the gaming experience positive. However, as you play for about, say, an hour or so, you’ll want to change the music, but there’s no option to unless you start your game over. It’s not that the music is horrible, it’s just that the music gets tiring after a while and there is a great need for variety after a while where the game doesn’t allow it. The sound effects aren’t bad either, but a little buggy. There’s two sounds when you clear something. One sound denotes that you cleared a virus, the other sound denotes that you’ve just cleared pill blocks. Sometimes, if you clear a virus in different ways (like sticking a pill below the virus to clear it), you’ll get the wrong sound. beyond that, the sounds are the kind of sounds you’d expect from a game of this era, but this isn’t necessarily a bad thing either. In fact, some of the sound effects are particularly well done like the effect you get when you clear all of a particular virus colour.

Overall, I enjoyed playing this game. This is one of those games I can see myself going back to every so often and enjoying again and again every once in a while. The concept is simple, yet effective in getting several hours of enjoyment. I’d recommend giving this game a whirl if you’re in the mood for simple entertainment.

Overall
Furthest point in game reached: Set the pill speed to low, then started at virus level 1 and made it all the way to the in-game cap of virus level 24 (you’ll keep playing this virus level until you die at that stage, but you do get a congratulations message if you beat level 20)