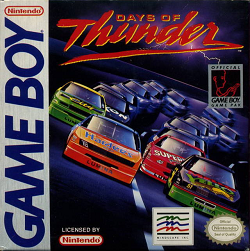 In this review, we strap on the racing helmet as we play the Game Boy game Days of Thunder. We find out if this game is worth a play.

This game was released in 1992. This isn’t the first time we stumbled onto this game. We previously reviewed the NES version. The game bombed largely thanks to it being not just a difficult game, but a functionally broken game as well. So, we wondered if this version is going to be any better.

When you begin the game, you have a couple of options. You can set the number of laps per race. You can also pick the track you want to race on for a single race. Alternatively, you can enter a season and take on the various heats as you seek to win the games championship.

In the secondary menu after choosing to race, you have a couple of other different options. You can test your skills in the practice mode. Alternatively, you can jump right in and take on the qualifier race.

In the qualifier race, you race against the clock. You race on the track for three laps. The faster your time, the closer to the front of the pack you can race in the main event.

Once you make it to the main event, you are pitted against 19 opponents for a total of 20 racers on the track. As a general rule, your first goal is to get past traffic and get as far ahead as you can. How much traffic you have to overcome depends on how well you did in the qualifier round. The number of laps you must race is whatever you selected in the menu going in (by default, it’s 5).

While the game suggests that there is 5 race tracks, there is really only one track you ultimately race on. The differences between the track revolve around distance and sharpness of corners. Beyond that, you are basically on the same track for every race.

The track is basically an oval. There is a banked corner on the one side and a regular corner with grass on the other side. There is a third corner that is off to the side near the start/finish line. At the half way mark is a pit zone. While I never used it in the races, you can presumably go in and re-fuel your vehicle. The dangerous part is a wall feeding into the final straightaway. If you hit this wall, it is game over. The wall pinches off, but even clipping this wall ends you race.

During the race, you can take on damage. If you take on too much damage (or you crash particularly hard), your race ends. The penalty is that you finish towards the back of the pack. Your season isn’t actually over if you crash your car, but you do get dealt with a setback on the scoreboard.

Going into this game, I was worried I would be in for another terrible play. This is because of my experience with the NES version. I was pleasantly surprised that this game isn’t horribly broken even though the platform suggests that this game is going to be trimmed back by a lot.

What makes this game work over the other version is that this game is actually winnable. At 5 laps, you don’t run the risk of running out of fuel like you do in the other game. With such a short race, it is also more than possible to complete each race without pitting – a system that was so badly broken in the other version.

Another thing that makes this game superior is the fact that all 20 racers are actually on the track. This is compared to the 10 race cars that were on the track before.

In addition, doing poorly on a race or two won’t effectively end your game or put you in dire straights. The point system and the fact that different drivers finish well on different tracks allows you to stay competitive. This give in the system is what helps make this game winnable.

While these are big improvements, this game isn’t exactly perfect either. This game retains the bizarre acceleration and braking system. You can push down the “A” button to make your vehicle go faster while “B” brakes. That sound pretty standard until you discover that once you hit your maximum speed, holding down “A” becomes redundant. This is because the buttons only adjust your speed. There’s no deceleration when you let off the gas. This makes things a little bit trickier while navigating corners because your only option for slowing down is braking.

The races still retain a high level of difficulty as well. While the difficulty is backed off here somewhat, you need to stay at top speed to remain competitive. If you drive onto the grass or tap the brakes, the game will punish you severely as other vehicles will happily pass you by. The problem is that it’s not possible to retain top speed because of the sharpness of corners on some tracks. Ultimately, bashing into the walls is what punishes you the least when encountering sharp corners. You take damage, but it’s easier to restore your speed.

Probably one of the biggest weaknesses in this game is collision detection. You can swerve out of the way of other cars, but sometimes the game still counts it as a collision even though you are seemingly clear of an opponent. While that’s bad enough, there are instances where you are way ahead in the lead and still find yourself bashing into an invisible car or two. You are alone on the track, yet a car is seemingly rear-ending you even though there is nothing on your rear-view mirror and 2nd place is far behind you. Ultimately, this game is very buggy when it comes to collisions.

Another thing that makes this game annoying is the sluggish controls. If you steer in any particular direction, it will take a moment for the game to react. This sluggishness can really get in the way of gameplay and overall reaction time. To make matters worse, the slow frame rate makes it difficult to compensate for the sluggish controls as well.

Generally speaking, the previous experience of this game set the bar extremely low. I can safely say this is an improvement over the previous attempt, but that in and of itself is not saying much. A big improvement is the fact that this game is very winnable. It may be a bit on the difficult side, but the points system and shortened races still makes this game more than possible to overcome. Unfortunately, sluggish controls and low frame rates makes this game suffer in the area of performance. The buggy collision detection didn’t help things either. So, this is far from a great game in my books.

Perhaps one of the most impressive elements in this game is the fact that this game utilizes a first person perspective. The fact that such an early handheld game utilizes this is certainly an impressive accomplishment. The details on the other cars is also very well done. Unfortunately, the cars disappear when they are right in front of you. The track is also little more than a couple of lines. The depth perception isn’t the greatest here either. Still, the image cutscene isn’t bad. While a good technological achievement is found here, it’s only decent in the grand scheme of things.

The music in the menus is pretty decent, though the quantity of music is limited. In the races themselves, the only thing that occupies the soundscape is the engine and crunching of metal. This gave leaves a bit to be desired on this front.

Overall, this game is an improvement over the other version we tried, but this is a very low bar to set. The improvements include gameplay that is, in fact, beatable. This is thanks to a shortening of tracks and a modified championship point system. This game is far from perfect with the buggy collision detect, low frame rate, and sluggish controls. The graphics are an achievement in that it utilizes a first person perspective, but there is some glitches in the graphics as well and the track is very basic looking. The audio is what suffers the most in this game with a short quantity of music and nothing but motor sounds and metal crunching to keep you occupied during races. It’s a passable experience, but there’s far better handheld games out there.