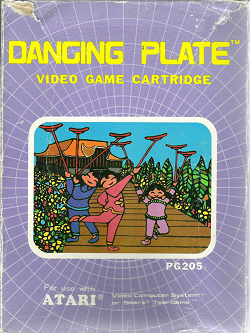 In this review, we prepare for the spotlight in the puzzle game Dancing Plate. We find out how well this Atari 2600 game plays.

This game was released in 1982 and was re-released a year later as Dishaster in other regions.

The game is very straight forward. If you’ve seen any classic circus acts, there’s a good possibility you’ve seen the plate spinning act where a person does his best to keep spinning the plates on top of poles.

You play a girl and the objective of this game is to keep the plates spinning. To do so, you need to walk under the pole in question and spin the plates faster in order to keep them spinning. While the game doesn’t necessarily show it at first, how long the plates lasts depends on how much extra spin you’ve given it.

As time goes on, additional plates are added, thus increasing the difficulty of the game. The points will continue to add up the entire time. The longer you last, the higher the score. If you see a plate begin to wobble, that is your cue to try and increase the plates spin.

There are three stages the plate can be in. If the plate is spinning quickly and doing fine, it’ll not even look like it is moving. The second phase is if there is some subtle teetering. The third phase is even more dangerous teetering. If it keeps losing spin, then the plate will eventually fall.

The game has an interesting quirk where if the plate falls, it is possible to run underneath the falling plate, catch it, and put it back on the top of the pole. That way, you don’t even lose a dish in the process.

If a dish falls and lands on the ground, you lose a sort of “free life”. In total, you have 5 drops (Dishaster apparently only has 4, but I haven’t confirmed this). If a 5th plate smashes, it is game over and the score will stop adding up.

One positive thing to say about this game is the fact that this game is very easy to understand. Some Atari 2600 games require digging through help pages or manuals to at least get an understanding of how to play. This game is surprisingly good about how easy it is to just pick up and play.

Another positive attribute is the fact that it has a very gradual difficulty curve. This only adds to the approach-ability of this game.

Having said all of this, this is one of those games that just has zero lasting power. Even though I had set this game to the easiest setting, I quickly got bored of this game after about 10 minutes of play. Sure, I could have played multiple times so I could develop more well thought out strategies and even challenged harder difficulties, but one play was more than enough as it got boring quickly.

The general concept is rather odd for a game. While I’m sure the concept made for some great clips for television, the concept grew to be boring in a hurry.

Generally speaking, while this game is approachable and easy to understand, it quickly grows boring even during a single play and doesn’t feel like it would be worth a second play even with differnt difficulty settings.

The graphics were surprisingly decent. If was clear what the character looked like for a game of this era and the plates made this game very playable. The wobble was especially well done and the flashing for added effects work quite well. It was, however, odd having the character spin the bottom of the pole, though.

The audio wasn’t too bad. There was basic sound effects in this game. To add to this, there was actual music as well. The music itself wasn’t anything to write home about, but it did break up play a little and helped the game avoid awkward silences.

Overall, this was not a game I would recommend playing. At first, it might not seem like that bad of a play, but whatever good fun you get from the beginning of the game is quickly replaced by boredom. All fun is just far too short-lived. Even with decent graphics and OK audio, it wasn’t enough to make up for the dull game-play. This one should be avoided.