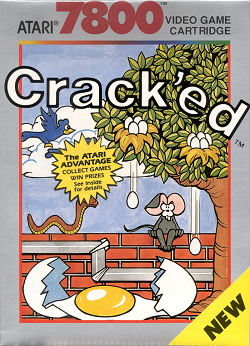 In this review, we get defensive in the Atari 7800 game Crack’ed. We find out if this shooting gallery game is worth a try.

The game revolves around eggs. You control a target on screen. One button allows you to shoot while the other one widens the crosshairs and allows you to grab falling eggs and place them back into a nest.

You have a grand total of 5 nests to defend. Each nest holds a half a dozen eggs. Anything that moves can potentially eat or steal an egg. If you lose every single one of your eggs, then it is game over.

For every enemy you shoot (be it ghosts, bubbles, snakes, birds, owls, or even aliens), you get 100 points. If an enemy happens to grab one of your eggs, if you shoot that enemy before it flies off screen, the egg will begin to fall. If you grab the egg and place it back into a nest, you’ll earn 300 points.

The goal for each regular level is to run out the timer. This is represented by the brown line alone the bottom left hand side of the screen. If you have any eggs left over from the round by the time the timer runs out, then you move on to the next round.

For every two rounds you complete, you’ll get to engage in the bonus level. In the bonus level, you take on the roosters. Instead of a crosshairs, you get two arrows. One arrow is along the right hand side of the screen while the other arrow runs along the bottom. The idea is that you get them to intersect where the rooster is and fire an egg. If you hit the rooster, then you earn an additional 200 points and an extra egg. If you miss, you get nothing and you lose an egg. What’s more is that if a rooster sees you, then ducks down and throws an egg at you, you lose 100 points. Leaving this round with nothing is a very easy thing to do.

The thing to keep in mind is the fact that the egg supply is limited. While you start with a massive 30 eggs, if you lose an egg, that egg is permanently gone. You can’t get any new eggs. When you enter each round, the eggs will be evenly distributed among the nests. Ironically, the hardest part of the game is when you start. As you lose eggs, the game gets progressively easier. The game is at its absolute easiest when you have only one egg left. This is because there is less screen space that needs to be defended. The downside is that having only 1 egg left means you are one mistake away from losing the game.

What’s interesting about this game is the fact that there are a number of different levels. While some levels repeat as levels are introduced, the variety keeps going for a while. Once you’ve exhausted all of the levels in the game, then you still have the variety of randomly being taken to any one of the levels. So, variety isn’t a huge problem in this game.

The variety of enemies is also a strength in this game. Each level has its own set of enemies. The space level has comets and aliens. The tree level has birds and snakes. The sewer level has rats. The underwater level has fish and other sea creatures. Each level has its own set of enemies. There are two sets of enemies though. There are the enemies that grab and the enemies that consume. The consuming generally go to the nest and take a moment before eating the egg. while there is a longer period of vulnerability, once the egg is consumed, you can’t get it back. The enemies that grab, however, take the egg immediately. There is a shorter period of vulnerability, but shooting the enemy after it grabs your egg makes it possible to recover that egg.

while variety is a strength, this game isn’t without weaknesses. Once you find yourself down to your last egg or two, the game can be so easy, that it’s boring. If you play a defensive strategy of keeping the crosshairs near your last occupied nest, levels can easily breeze by without much of a challenge. You can also go for high scores by taking more risks and shooting the enemies anyway. As a result, chances are, you’ll just deliberately throw the game just because you grow bored of it. This does not help the games replay value by any means.

Another problem with this game is the crosshairs system in the bonus levels. The two arrows on the sides makes it extremely difficult to pinpoint exactly where you are aiming. What’s more is the fact that you really only have time to fire off a single shot. If you miss, you get an egg thrown at you. With the amount of time it takes to set up a shot, there is a very good possibility that you’ll just miss the window completely. As a result, the bonus levels end up being a pointless exercise because it is virtually unplayable in any practical sense.

Generally speaking, this game has strengths and weaknesses. The variety of each level is pretty good. The enemies and the way they die add a surprising amount of flare to the game. It is also fairly simple to understand. The downsides include the unusable crosshairs system in the bonus levels. The fact that this game goes from hard to easy means you’ll probably throw the game out of boredom towards the end. This makes the replay value suffer a fair bit.

Graphically speaking, there’s two ways of looking at this one. On the one hand, the variety of levels speaks for how in-depth the art can be. The enemies and backgrounds really give you a sense of a visual journey. On the other hand, the backgrounds and some of the enemies look like they were drawn in MS-Paint after a while. You don’t really notice the low quality at first, but as you re-enter some levels for a third or fourth time, the artistic flaws become more and more obvious. The sewer level is an excellent example of this. As a result, the graphics are OK, but nothing huge.

There is some jingles in this game. At the start of each level is a jingle. So, there is some music to be had. If you die, you get another jingle. It’s enough to make the game seem not so bleak, though it would have been great to hear some full-fledged songs in this game. The sound effects are fairly low quality for a game of it’s time, but it isn’t terrible. So, this game is passable in this department, but only just barely.

Overall, this game is really about the duration. At first, the game doesn’t seem so bad. There’s plenty of challenge defending so many eggs and the levels are pretty good at first blush. As you get further and further into the game, it gets easier and the flaws become more and more apparent. As a result, the replay value is quite low. Chances are, by the time you finally finish the game, you’ll be more likely throwing the game out of boredom than anything else.

The art follows along the same theme. The variety is good, but the flaws become more and more apparent as you get further and further into the game. The jingles to break up play a little and the sound effects, though tolerable, are of a lower quality. An OK game to play once through, but after that, it’s nothing you can really go back to and play again.