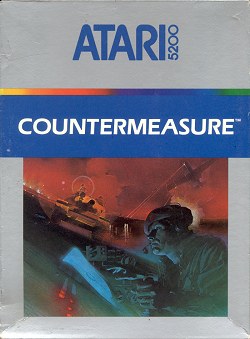 In this review, we try to save the world in the Atari 5200 game Countermeasure. We find out how well this top down shooter game plays.

You play a tank. You roll through the terrain trying to take down enemy turrets and the occasional enemy jeep.

Along the way, you’ll encounter yellow missile and another kid of yellow object. While it’s possible to destroy these objects, it is best to leave them intact.

After you obtain the three letters, you’ll need to touch a yellow missile. In this screen, you have 15 seconds to enter the “fail safe” code. With the numbers on your controller, you need to enter the letters in. 1 is “L”. 2 is “E”. 3 is “O”. In order, they’ll spell LEO to help you remember which is which. If you enter the code correctly, you’ll stop the missile attack. Fail to do so, and the planet will presumably be destroyed.

While the turrets are a major impediment, the landscape can also prove to be difficult to traverse. The watery areas will slow the tank down a bit. The trees and yellow bushes will slow down the tank significantly. If you destroy an enemy, a fireball will be left behind. This will also significantly slow the tank down as you travel through it. Buildings will also slow you down, but they can also slow bullets down as well (weirdly enough). With so much sitting around in the level, it ends up being a bit of a labyrinth.

A big problem with this game is the controls. While you can move in all 8 directions, if you move in one direction, the game will automatically push the tank in the opposite direction when you aren’t moving the joystick. This requires a moment of randomly moving the joystick around in all directions to “fix” this. Otherwise, it’s annoying to work around.

The controls are not the most intuitive either. One button fires while the other positions the main cannon. The cannon will change to the direction you happen to be moving in at that point in time. While this can enable fast movement of the cannon, you do often spend time just re-configuring the orientation just to make it workable for the next target. Combined with the other movement bug, this becomes even more annoying at times.

Between fighting the controls and puzzling over what I even need to do, I spent so much time trying to figure out, that all the fun got sucked out of the experience. Even when I won a round, the game still gradually got more and more boring before another lucky shot from an enemy made me decide to just set the controller down and switch off the power. So, in the end, not the most fun experience I had, that’s for sure.

There are some strengths and weaknesses with the graphics. The housing and other obstacles were fairly well realized. The enemy cannons were average looking, though. The items left a lot to be desired.

There are two jingles in this game. One is when you fail to enter the fail safe code in time. The other is when you succeed. They are OK. Otherwise, the sound effects are fairly basic. Nothing huge here.

Overall, this is one of those games to pass over on. The controls are clunky and buggy. The objectives are unclear. By the time you figure it all out through trial and error, the game becomes a bit of a dull experience. The graphics had their hits and misses. The hits are the scenery in the level. The misses are the enemy turrets and items. The jingles aren’t bad, but the sound effects are fairly average. So, if you haven’t played this game, you aren’t missing much in my view.