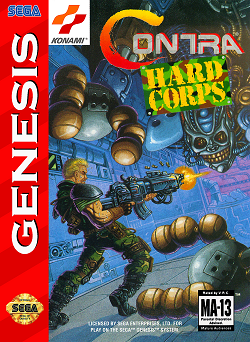 In this review, we take on the cyborgs in the Sega Genesis game Contra: Hard Corps. We find out if this action game is worth a try.

The story seems to be that an unknown force of cybernetic robots have invaded a city. It is up to the four member team of the Hard Corps to investigate and stop this invasion.

You start off with a general machine gun. After you crash through some of the invaders with your vehicle, you must proceed on foot. Along the way, there are numerous enemies for you to take down. Some of them are snipers while others are foot soldiers who charge at you on foot. Also along the way, you’ll encounter mini-bosses as well before taking on the stage boss.

Along the way, you’ll encounter various power-ups. Some appear on screen like they usually do in this series: flying through the air for you to shoot down and collect. A few of them, however, break the tradition and are found on ledges guarded by enemies.

Another change in this game is the fact that the weapons are lettered A, B, C, D instead of the first letter of the weapon name. In addition, the weapons can be selected. Previously, if you collected a weapon, you are often forced to discard the previous power up in favor of the new weapon. If, however, you die, the weapon you have selected will be lost.

Like previous Contra games, you have three lives to work with.

One thing I noticed about this game is the difficulty. The game can be downright frustrating to play with. As I am already familiar with previous games, I know Contra is well known to be difficult. The thing is, unlike previous games, this game barely even gives players a chance. In other games, it is more than possible to make a reasonable distance through the first level without dying. In this game, you can easily die within seconds of starting play. As a result, the difficulty is more frustrating than usual.

Apparently, this game features split progression paths and even allows for multiple endings. Unfortunately, the difficulty prevented me from even seeing any of these features as I couldn’t get past the second phase of the final boss on stage 1, so I can’t even take that into consideration.

One good thing about this game is the fact that different characters get their power-ups in different ways. If you pick up one power-up as one character, you may get a thin protective bullet shield. That same power-up as another character will, instead, mean you get larger bullets. So, that does help give this game some feature variety.

Generally speaking, considering how many have given such high praise for this game, I was pretty disappointed with this game. The weapons system is an improvement. Unfortunately, the difficulty curve is even steeper than previous entries in the series. It is to the point that you can’t even experience some of the more impressive features that are apparently in this game. The game has a nice variety of features in the power-ups department that is an improvement over previous games, but that’s about it.

The strongest feature in this game is definitely the graphics. The special effects and sprite break-up is great to see. The vibration effects are also great to see. The object manipulation from time to time is also pretty well done. The only problem I see with the graphics is that it can be a bit excessive. As a result of so many special effects happening at once, it can be hard to keep track of the location of your character at times. Beyond that, the graphics are great.

One thing I was really looking forward to is the music. I remember the NES and Game Boy versions had such great music accompanying the action. This game disappointed me in that regard. What I heard wasn’t all that memorable. The sound effects ended up out-performing the music in this game. The voice samples are great to hear, but many of them are incomprehensible garble sadly. So, as a result, it’s a very average effort in my view.

Overall, after hearing so many great things about this game, I found myself struggling to even enjoy this game. The difficulty is a big setback for this game more so than normal. The weapons system is definitely a big improvement, though. Still, it is hard to appreciate very many features when you are constantly faced with the Game Over screen because the difficulty is so game breaking. The only thing I ended up being impressed with are the graphics. The special effects are great, though you can lose yourself a little in the effects. The music ended up being a letdown for me. The sound effects saves things somewhat, but speech samples are pretty garbled. So, generally speaking, this game is a letdown for me.

Overall
Furthest point in game: Died on the second phase of the stage 1 boss.