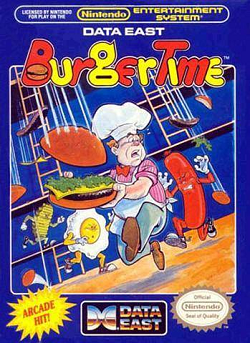 In this review, we check out the NES interpretation of Burger Time, a game previously released on an Atari gaming console. We find out if this version of the Puzzle survival game makes any improvements over the last one we’ve reviewed.

This particular version of Burger Time was released in 1987, four years after the Atari 2600 version. Much of what was found in the previous game was moved over to the NES version, so we’ll dive into specific differences in this review.

One major difference is the number of enemies you’ll encounter. This number was increased dramatically to the point where instead of outsmarting the simple AI of a few monsters, you’ll be trying to avoid an entire crowd of monsters that, even if you successfully squash under the ingredients, will quickly re-spawn from one of the sides of the screen.

Still, you now have a weapon to help protect you – namely pepper you use to temporarily stun them. The unfortunate part is the fact that while you do have a weapon, you’ll only get 5 shots worth. Considering the number of monsters you are going up against, it might be enough to comfortably get you to the next level – or maybe even level 3 if you are lucky enough. The only way to refill your ammo is to collect the randomly appearing drink that appears in the middle of the screen. They only occasionally appear and only give you one extra shot unfortunately.

Another thing to note is the fact that you have only 4 free lives. You gain free lives by gaining 10,000 points.

As you advance through the stages, you get to encounter increasingly difficult to navigate maps including a few that have ingredients at dead ends.

Personally, I felt that there were too many monsters and not enough ammo for your weapon. If collecting the randomly appearing drink gains you 5 shots instead of 1, then I’d say you, as a player, have a fighting chance to make it to level 4, but beyond that, this game will likely cause you to use up all of your lives by the time you are tackling level 3. Since this game actually has a number of levels beyond the first 3, most players will never experience them (including myself had I not been curious enough to employ game genie cheats just to see what the rest of the game is like).

This game seems to have unlimited levels, but a limited number of maps. So, it just loops through the maps after a while and increases the speed of the monsters after looping through at least 1 and a half times.

One criticism is the transfer from ladder to platform. It seems to be extremely picky on when you can go from a platform to a ladder and a ladder to a platform. This causes you to get “stuck” briefly in certain areas of the maps which is often when enemies are closing in. I found this to be frustrating.

Graphically, this game was a major improvement over the Atari 2600. You can clearly see what each monster was (i.e. a sausage, pickel, egg, etc.). Even the ingredients used to make the burgers were a huge improvement over the previous version we’ve played. Still, with the bleak black background dominating the screen, I would say that the graphics were good, but not great.

The audio shares a number of similarities between this version and the Atari 2600 version. There’s the standard Burger Time music, though the music is of a better quality likely thanks to a lifting of hardware limitations. Still, the fact that there was only one song eventually drags down the gaming experience. The sound effects were also improved, but it could have been better.

Overall, this game was extremely difficult to play if you want to play beyond the first 2 levels. There was too many monsters and not enough means to defend yourself. It is an interesting concept, though I think there are many ways this game could be improved on. You can get some entertainment value out of it, but it is generally short lived.