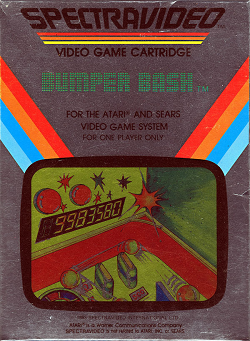 In this review, we break out a roll of quarters as we get ready to play the Atari 2600 game Bumper Bash. We find out how well this pinball game plays.

It’s primarily a pinball game. Unlike most pinball games, this one gives you 5 balls instead of 3.

A lot of familiar elements are found in this one. You have the letters that you can spell (ACE) through the rollover targets. You also have the drop targets (two sets of three, one on each side) that grant you multiplier bonuses. You also have three bumpers towards the upper portion of the table (netting you points and increasing the speed of the ball most of the time). In addition to this, you have the spinning target that earns you points as well. Finally, there are the rail bumpers as well as the additional paths where the ball can drain.

While you can move the ball all the way back before releasing it into the table, this is rarely advised if you want to snag an early letter. So, you’ll likely find yourself trying to find certain sweet spots so that the ball will go through a rollover target instead of just falling down one of the two side chutes. Be warned, though, there are certain positions that will drain the ball down the right hand side path.

One positive thing to say about this game is the fact that it’s a far better attempt at making a pinball game than Video Pinball from a few years earlier. It has a less “boxy” feel to the overall play even though it still feels like you are playing in a box rather than a rectangular table.

Another positive thing to say about this game is the fact that it contains most of the classic pinball elements on this table. Besides a few chutes and rails, this version has almost a complete, though limited, arsenal of things you can see on a real table.

One thing that is still iffy with this one is the fact that ball phsyics can be a little iffy at times. The upper portions of the rail bumpers have more of a tendency to bounce the ball upwards rather than send the ball at a less extreme angle than the lower portions of the rail bumper. This greatly decreases the directions the ball can travel when hitting these. In addition, the ball all too easily gets snagged at the end of your flipper if you press and hold them up. Either there is enough force that it goes sailing over to the other flipper, or it instantly stops. It’s a little odd to see. Still, it is a half decent attempt at getting more realistic ball movement onto such an early game.

Another downside is the fact that play is a little lopsided. While it is possible to have the ball drain down the left side of the table, it is actually surprisingly difficult. Most of the time, it will actually drain down the right hand side of the table if it isn’t draining between the flippers. The placement of targets is far more compact on the left hand side whereas there is significantly more table real-estate on the right hand side. A bit more balance might have been in order.

Generally speaking, this wasn’t a bad play, but it did have its flaws. The table design – namely the placement of certain features, weren’t the greatest. The ball physics was decent, though it is, at times, flawed. Still, you can’t argue with the variety of objects on the table.

Graphically speaking, this was OK. Considering Atari 5200 games were being released as well at this point in time, you can’t really expect big things from this one. Everything was reasonably clear and identifiable though. The score was clear and multipliers were, at least, displayed along with the number of balls left. The objects themselves were half decently drawn. The added flashing effects was a nice bonus, though. One criticism I have is the odd extra pixels to the right of the right flipper. No idea what that is supposed to be, but it doesn’t seem to have any particular use.

Overall, this game offers a decent, if flawed experience playing pinball. It is an improvement over the previous pinball game. It does feature a lot of the classic features found in a pinball game, but the placement of some of the objects wasn’t the great – some of which made for some lopsided play. Generally speaking, it was an OK play.