Few board games from the late 80’s or early 90’s are more recognizable than Battleship. Unsurprisingly, there were a few spin-offs from this game including a few video games at the time. We take a look at the NES version of Battleship.

If you’ve played the physical version and think that you have a leg up in terms of strategy, take just about every strategy you’ve learned from playing the physical game and throw it out the window. That’s what this version ultimately does. The grid dimensions are completely different, some of the ships are different and you not only have the ability to fire shots that are more than 1×1 in size, but also be able to collect reconnaissance information as well during a turn.

You start off with pretty much the usual shapes of ships. One that’s 1×2, one that’s 1×3, one that’s 1×4 and, of course, the battleship at 1×5. You can rotate them 90 degrees and place them wherever. Some elect to just place them randomly on the board, I personally opted for the strategy of placing them at the edges of the field so I can watch the computer keep firing randomly in the middle of the playing field and missing every time.

The one important thing to remember, I found, is to figure out which ship fires which weapon. While it’s labelled as you scroll through your weapons, it’s sometimes easy to forget which ship is what. So, here’s a quick cheat sheet:

If a ship of yours sinks before you fire the shot that’s on board, you lose the chance to fire it for the whole match. So, firing your special shots can be critical. What’s also critical is being able to sink your opponents ships quickly so the computer doesn’t get a chance to fire some of the special weapons.

One strategy that you can’t employ once the submarine is available is just firing in a checker board fashion. This is because the submarine is 1×1 in size and, unless you happen to get lucky on a particular shot and sink your opponents early in the game, you might find yourself striking every square trying to find the darn thing. This, I found, was the only frustrating part in the whole game and striking pay dirt early in finding your enemies submarines adds a sort of thrill to the game.

If you’re about to lose a particular ship on your side, scroll through the remaining weapons you have and find anything that is labelled that particular ship and fire them off as quickly as possible. It’s better to have fired and missed than to have never fired at all.

The gradual ramping up of the computer’s logic (though I never found the computer player to be too difficult, just occasionally lucky) made the game interesting. In the process, for each “world” you advance (the system is #-# and the first one is like a “world” even though it’s pretty much the same thing between “worlds”), you gain something extra – whether it’s one of the two unlockable ships or an additional special weapon, you typically get something.

By the time you get to the last few stations (8-1 to 8-5), rounds tend to go by quicker as you have so many special weapons and all these ships occupying so much space on the board. Just about every special weapon you fire is probably going to hit something.

One of the let downs of this game, I found, was the near lack of decent graphics. I get that it’s all about strategy and it’s based off of a general board, but the only decent graphics are the intro picture, the ending picture and the “scope” view when you fire something. The scope view only tells you if you hit something or miss something. Beyond that, it’s random simple animations. So if the animation suggests you hit the bow, don’t read too much into it. It doesn’t necessarily mean you hit the front of the ship, it just means that you hit something.

The audio was decent enough. the music was good at first, but it got a little tiring. I felt that the music could have been varied more between rounds, but it’s the same song when you set up your ships every round, same song during the battle portion and same song you hear during the battle report portion. Since there’s numerous rounds throughout the game, it get’s tiring. The sound effects are few and unvarying as well, so there wasn’t much in the way of “wow” factor in that category.

Overall, if you’re into strategy and board game style games, this game can be a decent one. For the average gamer, this game, in spite of the variance between some of the levels, it can get to be a bit tedious after a while. So it really depends on where your interests lie in this case. I didn’t think it was that bad of a game as long as you break up the game play in smaller chunks. The passwords make that more than possible.

Furthest point in game: Beat the game. Not to brag, but this was the highest accuracy I ever got in the game: 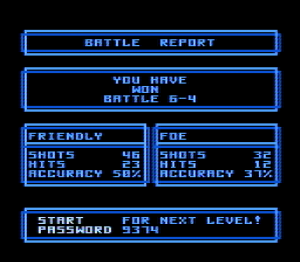 If you’re getting anything above 42% accuracy by the end of a match, it’s pretty much really good luck more than anything else.