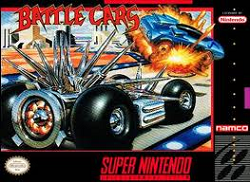 In this review, we check out a combat racing game for the SNES. This is, of course, the game called Battle Cars. We find out if this game delivers on both enjoyment and explosions.

Battle Cars was released in 1993. While we aren’t aware of any sequels of this game, the game mechanics were certainly used in many games since developed. The game takes place in a post apocalyptic world for a majority of the tracks with the final race courses taking place on other planets.

You take control of one of the three stock vehicles available. While you have a decent sized choice on which color you can choose, nothing else can really be customized before the first race.

Once you have selected your ride, you must race in what is known as a cross country race track. These race tracks have a beginning and an end and does not loop. The objective is to complete the track within the target time. If you are still racing when you run out of time, the flying track bots begin attacking you. These bots are capable of throwing you into the rail and inflicting major damage until you either cross the finish line or blow up.

You have limited health which can be seen on the energy meter on the bottom left corner. At the start of the race, it is almost empty, but quickly fills up to the top. When it’s bright red, you can go faster (ala using your “turbo”). If you take some damage, your meter will turn a darker red. You are still able to use your turbo, but you run the risk of simply using your engine as acceleration and top speed. If you take enough damage at a given time, your meter will turn grey. This disables your turbo and forces you to revert to your slower engine for overall speed and acceleration. As a general rule, your engine is never as fast as your turbo. Fortunately, after a few moments of recovery, your meter will once again turn bright red and your turbo will kick back in.

Cross country courses can be your biggest source of revenue. For every enemy you defeat on the course, you gain 100 in cash. If you complete the track under the target time, you’ll earn 110 credits for every second you beat the target time by. So, doing well in either speed or combat can net you major advantages for future races. So, doing things like sharp cornering with both the arrows and either the L and R buttons will be of big help.

The two currencies in this game go to two different aspects of vehicle upgrades in the car shop. Cash can earn you upgrades for your normal vehicle operations such as tires, engine, turbo, and jump ability. Meanwhile, credits can be spent on upgrading your three weapons: explosive sliding discs, heat seeking missiles, and your grenade launcher.

After you complete the cross country race in that area, you’ll be able to take on the track boss. Each track boss has their own custom vehicle. While you can’t destroy the track boss with weapons, weapons will slow them down. You’ll be greeted by their picture and whatever supposedly intimidating comments they have before the race (though you do get a neat little turntable of their car). You cannot earn their cars, but in later levels, you can encounter a destructible version of them on the coarse as random track drones. You will be put on a looped course with the track boss and start immediately. You have only two laps before the end of the race, so make sure you cross the finish line first if you want to win.

One great strategy I employ which takes advantage of the game mechanics is to deliberately lose the race against the first track boss. The reason for this is the fact that you’ll be given a chance to race the cross country course again with all the cash and upgrades you earned before. Simply keep re-racing the cross country course either focusing on weapon or vehicle upgrades in each attempt until everything is maxed out in the shop. Then, take on every boss like a, well, boss. The first few will become a breeze because the game expects you to only have minor upgrades at that point. The only downside to this strategy is the fact that the credits you earn from defeating the track boss, however small, are completely worthless to you now that you have a maxed out car.

You start in Newtroit, but will gradually move to other areas. Different tracks have their own theme that either loosely or closely represents the track boss in question. Some track bosses have driving capabilities I can’t really figure out how to replicate. This includes the ability to instantly stop, turn around, and shoot a disc backwards before instantly turning around and driving forward again. Others can drive backwards and fire discs at you. Additionally, there’s apparently a way to instantly ram your car against another into the wall. One thing I have been able to replicate is jumping and landing your car on top of an opponent to force them to spin out. It’s difficult, but can be done. Since no enemy seems to be able to fire heat seeking missiles, I never had the opportunity to replicate the ability to just fire a disc whenever I’m being chased by a heat seeking missile. The idea is that the missile will chase after the disc instead of you, allowing both to harmlessly blow up somewhere in the distance ahead.

Depending on what difficulty you’ve set for this game, your game can end on different tracks. The hardest difficulty allows you to play seemingly all of the tracks. If you win on the hardest difficulty, you gain the ability to play a top down racing version of this game though I found that it’s harder to play because you can not see as far ahead into the distance as you can from the third person perspective thanks to the centering of your car on screen.

Personally, when it comes to third person perspective racing games, I think I had the most fun out of this game in particular. It’s fast paced and has a good difficulty curve. There’s a great variety of things to experience and I have no problem playing this game many times over just for fun. Some of the things your opponents say to you might be a little weird, but that’s just a small detail in the grand scheme of things.

Graphically, this game was very nice. There are other third person racing games for the SNES, but this is the fastest paced one I’ve played. There’s no lag that I could see and the pictures aren’t too shabby. The only complaint I have is the fact that the car selection screen seems a little bland with the blank background, but that’s about it.

The audio was also a very strong point of this game. Some of the music is so well sequence, I can easily enjoy the music outside of the game. That’s really saying something for a game produced on the SNES because there are very few SNES games I can even do that. The sound effects were nicely done and compliments the game well. Can’t really find anything to complain about here.

Overall, I thoroughly enjoyed this game. I always eventually find my skills stretched to completing the final races. Some of the enemies special attacks are quite interesting such as replicating themselves as three racers to keep you guessing at which car ahead of you to hit. At the same time, the beginning levels (especially at easier settings) are very approachable and allow you time to get some basic skills down for later races. The graphics were nicely done and the audio was excellent. Overall, this is probably one of the best SNES racing games I’ve ever played to date. Definitely recommended. Wished there was a sequel to this game as it has so much potential to it.