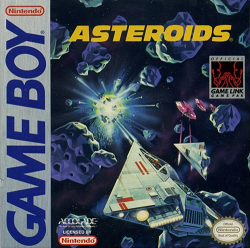 In this review, we play intergalactic clean-up crew in the Game Boy game Asteroids. We find out if this top down shooter is worth a play.

The game plays a lot like the other versions. Probably the biggest difference is the menu at the beginning. Left and right selects the difficulty while up and down selects the mode you want to play.

In easy mode, you are pitted against a small number of asteroids that increase in speed and number as you progress through the waves.

In medium, you go up against a moderate number of asteroids that move at moderate speeds. You also occasionally get attacked by a UFO that fires shots at you. Asteroids grow in numbers and speed as the waves progress.

In the hard mode, you face off against fast moving asteroids at a larger number to begin with. The UFO’s are also out to attack you as well. Like the other difficulties, the asteroids increase in numbers and you get to go up against a growing number of them for each successive wave.

The controls are pretty straight forward. “B” fires your main gun. “A”, meanwhile, randomly transports you to another part of the level. Great for getting out of tough situations, but you can always find yourself teleporting straight into another asteroid. Up activates the thrusters. Left and right steers the ship.

Also note that the level wraps around in all directions.

You are given three lives. For every 10,000 points you earn, you get an additional free life. This ends up being a pretty tricky task – especially on the harder levels.

The use of the menu does help improve things by adding a sense of user friendliness. It’s more intuitive than having to reach over to the console and fumble with the buttons on the console just to figure out how you want to play the game.

Once you get past that, it still ends up being the same game that you played years ago. You break up the asteroids and keep going until the levels become too much of a burden to push through. What I would have liked to see is some form of items you can get to make your job easier. Either that, or insert some other features that make tings more interesting. Unfortunately, any sign of innovation during the game itself is pretty much non-existent.

To make matters worse, this version was released 11 years after the 7800 port came out. A lot changes in the world of gaming in 11 years – especially when you are talking about the 90’s. Because of the way the game operates, you can be done playing this game in a half an hour. Even by Game Boy standards, this is way below standard.

The only good thing I can say about this game boils down to being a faithful port from the original. If you want an accurate port of the original game, this comes pretty close considering the platform. Unfortunately, nostalgia is about all this game is good for.

Generally speaking, this is a really outdated game. The game is way too short to be attractive to new gamers. The gameplay is outdated for the time, even if the play is so faithful to the original. The menu system does give the game a better sense of user friendliness, but this doesn’t help the game much.

The graphics are an improvement over the previous ports. While it is stuck in the grey scale limitations, the ship is nicely detailed and the asteroids do keep that original Asteroid look. There are even stars for added detail. Sadly, that is about all you get. With such a short game, it’s hard to give the game much praise simply because of such a shortage of quantity.

The added music does help make this game stay relevant, but the audio still ends up being very relevant. The jingles at the beginning and during the game over screen does modernize this game somewhat. The sound effects are alright, but nothing too impressive. Once again, quantity really hurt this games chances here.

Overall, this game is both very short and outdated. While some efforts to modernize the game does help, the efforts only went so far. The menu system makes the game more user friendly, but that’s about it. The graphics are OK, but suffer from the limitations of this being a short game. the audio is pretty much in the same boat. The jingles help modernize this game somewhat, but it simply can’t compete against other handheld titles floating around at the time. While it may be able to bring a sense of nostalgia to older games, it will have a hard time attracting new gamers. Not all that worth it in my view.