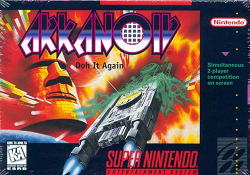 In this review, we check out another SNES puzzle game title. This time, we are checking out Arkanoid – Doh it Again. We find out if this updated take on an older classic is worth a replay.

This particular game was released in 1997 and would be one of the last games released on the SNES.

Often considered by some as a clone of a much older game called Breakout, this game is definitely a throwback to a previous era in gaming.

The basic premise is that you have to keep a ball in play and hit the ball against all breakable blocks on screen. Destroy all of the breakable blocks, and you get to advance to the next round. Unlike Breakout, Arkanoid, including this version, has a number of features to call its own. In this version, there are enemies that appear on screen that, while often getting destroyed on impact of the ball or the paddle, can deflect the ball into a different direction.

Also thrown in the mix are collectable items that seemingly randomly pop out of breakable blocks on impact. W (I’m presuming “Warp”) opens a portal on one of the sides of the screen. If you move the paddle through it, you automatically warp to the next level. M (I’m presuming “Meteorite”) causes the ball to turn green and emit a short vapor trail. The effect is more than visual as the breakable blocks disappear as the ball passes through as if it wasn’t even there. Useful on some more frustrating and slow levels. E (I’m assuming “Extend”) makes the paddle longer, increasing the odds that you’ll get to the ball on more difficult angles. You can stack two to have a paddle almost half the width of the playing field. My favorite item pickup, however, is L (Which I’m sure is “Laser weapon”) This transforms your paddle and enables you to fire lasers at blocks, breaking them up in a much more efficient pace. You can also shoot and kill enemies in the process. Other items include G (which enables you to grab the ball with your paddle and shoot it back up at the push of a button) and D (divides the ball into 8, hitting numerous blocks at the same time, though it also greatly speeds up the balls speed).

After completing a certain number of levels, you get to square off with a boss. Some of these bosses are the sandworm-like creature (which kind of reminds me of a Legend of Zelda enemy, really), but most often, you are squaring off a version of Doh – the games main protagonist that looks like a red Easter Island statue. In any event, there are two ways of dying on these stages. The standard way of dying is losing the ball. The other way is getting hit by an enemy attack. Your main form of attack is simply slamming the ball into a vulnerable part of the enemy. Everything about the worm is vulnerable, but the final iteration of Doh compels you to destroy the arms first before destroying his body.

A strong point is the ability to continue after losing all of your lives. You have an unlimited number of continues and when you do use a continue, you start again on the level you died on instead of starting over on level 1. This actually allows players to see more of the game and, if it weren’t for this aspect, 90% of the game would probably never be seen by most players. The only thing that breaks this system is on boss levels. On boss levels, you have to start over again when you lose a single life (which makes these fights much more difficult).

I have to say, when I was playing this, I pegged the release date as much earlier than what it actually was. I thought this would be somewhere in the middle of the SNES lifespan (like 1994 or 1995). If it really was released at around this time. If it was released at this time, then I would say this was an above average and decent game overall. Unfortunately, 1997 was when the N64 and Playstation were both taking off and games like Goldeneye 007 and Turok – Dinosaur Hunter were impressing gamers. So, in order to really justify its existence, this game would have to be a really good SNES game. Unfortunately, this game isn’t exactly super amazing, so I do wonder what the point was in releasing this game.

In addition to this, there are 99 levels. While that may make this game seem like something that has a lot of gameplay available, the game is basically chopped up into 33 level increments. After completing both level 33 and 66, you are treated to the exact same cutscenes after defeating the exact same bosses. This, unfortunately, made the game seem stagnant. If the boss fights were different, then there might be a sufficient amount of variety. to add to this, the boss fights are apparently the same for the last 33 levels, only you get a different ending after completing the 99th level. So, really, the only variety you get is the levels themselves. Sometimes, the play fields are different looking and the designs you break apart always change, but by the time I reached level 70, I lost motivation to really continue.

Graphically, this game was competing against N64 and Playstation juggernauts at the time. Gamers were getting used to the idea that 3D was the norm and not the exception. So, even though this game was almost half decent for the SNES platform, it seemed almost pointless. I would think an even smarter decision would have been to completely redo this game for the next generation and make levels pseudo 3D in much the same way The New Tetris was two years later. Either that or simply release this on the Gameboy Advance because the quality of graphics would have made sense on a handheld console at the time.

The audio was also nothing to be impressed by. There’s the standard Arkanoid fanfare as interpreted by the SNES. Beyond that, there’s an additional track for boss fights and one more for cutscenes. After that, all you get are the bleak silence only broken up by the pinging of the ball and the defeat of enemies. This, unfortunately, added to the overall grinding feel of the game. I think something should have been added to this game in this department. What, I’m not entirely sure, but there’s got to be a way of improving the audio of this game beyond what was shown here.

At the end of the day, if a game is going to wind up being at the tail end of a console’s development cycle, it better be a very good and memorable game. Unfortunately, this game was a decidedly average game for the SNES system. With games appearing on more powerful consoles capable of supporting more detailed 3D graphics, it’s hard to justify a 2D game on a last generation console. A game that might be interesting to play for puzzle gamers and the curious, but a generation too late.