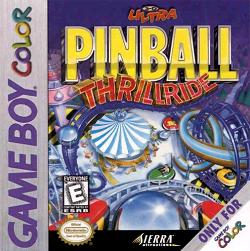 In this review, we throw our hands up in the air in the Game boy Color game 3-D Pinball Ultra: Thrillride. we find out if this pinball game is worth a play.

This game was released in 2000. It is a port from the PC version.

The game revolves around a single pinball table. The table is apparently inspired by the thrill rides from the Hershey theme park.

The table features a lot of things you would expect in a pinball machine. There are bumpers, side bumpers, chutes, a spinner, and, of course, drop targets.

The kickers work in an interesting way. On most difficulties, you get to start off with 1. The interesting part is the face that you can toggle which side it is on. This can allow for some maneuvering whenever the ball goes at a funny angle.

Just above the chutes, there are letters you can spell out. Again, you can use the flippers to toggle which lights are activated. In all, the letters spell out the word “HAPPY”. If you spell it out, you’ll get a bonus. This can be an extra 100,000 points or even multiplier bonuses.

Another word that you can spell out is “RIDES”. these lights are located along the top, though it can be difficult to get there. This is because getting the ball into the field at the beginning completely bi-passes the area. In addition, there is only a limited small area off to the side you can fire the ball directly up into it. Probably the best way to get there is a weak shot from the side chutes that allows the ball to drop in to the top.

If you spell out “RIDES”, the thrillride tent will become unlocked inside the upper area. If you enter that tent when it’s open, you can take on a bonus area which features a miniature pinball zone. This can net you large bonuses inside. If the ball drains here, then you’ll be brought back to the main table again.

The spinner on one side for the first two difficulties pretty much just nets you points. On the hard difficulty, however, you’ll notice that you won’t have any kickers at all. To activate a single kicker, you need to send the ball through the spinner. Each rotation will give the side power meter more power. If you max out the power meter, the side kicker will be temporarily activated.

You’ll notice at the beginning that there are three difficulties. The three difficulties are I (easy), II (medium), and III (hard). In the easy setting, the one kicker is always activated. The table is also very lenient with quick ball drains. That means that if you drain the ball quickly, it won’t necessarily count towards your ball count and the ball will re-enter the table again. In total, you have 5 balls to work with as well, so you get many more chances at success in this game.

On the medium setting, there is some leniency towards quick ball drain, but nowhere near as lenient as the easy setting. In addition to this, you get the more standard 3 balls to work with.

Finally, there is the hard setting. As earlier mentioned, you won’t get the kicker right away. To make matters more challenging, the kicker that you do earn will not last very long either. There is no leniency with early ball drains. To make matters even more challenging, you only get 2 balls to work with. So, make sure each ball counts to get as high of a score as possible.

One of the first things that I noticed is that this game is very short. You could spend less than an hour on this game and get your fill of this game. This is thanks, in part, due to the fact that you only have the one table to work with. It would have been nice to have multiple tables to work with, but all you get is the one single table.

The table is fairly well designed. It isn’t the best pinball table I have ever played on, but it has it’s advantages (the 5 ball easy mode being one of them). It’s annoying that almost half the table is barely accessible though.

The difficulties are well set. The way the rules work on each difficulty really makers each difficulty well-labelled. For me, I could get millions of points without too much hassle on the easy setting. Meanwhile, in the medium, getting a million points can be a challenge. The hard setting, well, let’s just say I have a hard time lasting very long on that difficulty. So, difficulty is well set.

Generally speaking, this is an all or nothing game. Either you like the table it features or you don’t. There is only one table. While the table is pretty decent, it does have its flaws. One big one is accessibility to half the table. Because of the single table system this game has, gameplay is short and limited as well. On the plus side, the difficulties are a nice feature and are well-labelled. So, it’s an OK game, but rather limited.

The graphics are alright. It’s not an amazing accomplishment, but it does get the job done. I think the ball is well animated and there are some simple animations on the table as well. The menu’s could have been better if you ask me. An OK job, but nothing to get excited over.

The audio is a bit of a weak spot for this game. While there is actually different music in the game itself, most of the time, you hear one track. This track not only gets repetitive after a while, but it also short. So, it takes nothing for it to loop. The sound effects are OK, but nothing huge. An overall mediocre job.

Overall, this game is just plain short. There is only one table. The different difficulties do spice things up a little, but you are still stuck with pretty much the same table the entire time. Half of the table is difficult to get to as well, but it’s not a bad table otherwise. The graphics are not bad, but nothing huge. The audio could have been better. An overall fairly average game.