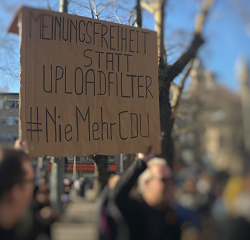 The ink has barely dried on the finalizing of Article 11 and Article 13 and now, protests are beginning to emerge in Europe.

Digital rights advocates have told the people of Europe that the fight now rests in the people. It seems that European’s don’t need to be told twice. On Twitter, the hashtag #Artikel13Demo quickly picked up steam.

Last night, we suddenly saw a surge of people calling for protests across the platform. Within hours, pictures started to emerge of half painted protests signs, arts supplies, and calls to action.

Today, the hashtag is flooded with images and videos of protests erupting on the streets. One person tweeted out the following picture:

Another person tweeted a map of massive protests being planned across the continent.

In a different post one person tweeted one one video of another spontaneous protest.

Another person tweeted this image:

One person tweeted a picture that showed that some protests had a police presence:

Another person sarcastically tweeted out how everyone is just bots while posting this image:

This person commented how great the weather was for the protest as this picture was tweeted out: 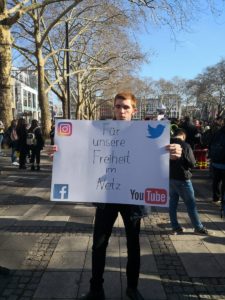 Sarcasm about how everyone is just bots certainly became a theme with this tweet as this picture came with it:

The German Pirate Party also posted a video where people could be clearly chanting “save the Internet” and “save your internet” over and over again while protesters flooded the streets.

The thing to keep in mind that this legislation was finalized very recently. It was only this last Wednesday that Article 11 (link tax) and article 13 (censorship machines) was finalized. It was swiftly denounced by digital rights advocates. Now, barely a couple of days later, protests are erupting across Europe as clearly shown above.

With so much action already taking place, the sentiment seems to be how much bigger the protests are going to be on later dates when these protests aren’t so hastily organized. A lot of protests are also happening in Germany which just so happens to be the country where politicians caved last week to the pressures of France and withdrew its opposition to the legislation.

Of course, the reaction isn’t that surprising. With so many positive things coming from the Internet, citizens aren’t exactly keen on giving it up so easily. Small businesses and peoples dreams become reality on it every day. The idea that all this could be taken away is easily upsetting to many people. With this much action happening on the streets, European’s are proving that they won’t give up without a fight.