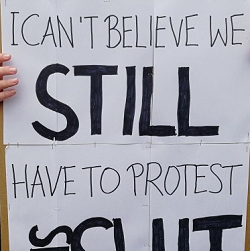 The backlash continues as opponents to the censorship machine and the link tax take to the streets to fight article 11 and article 13.

They contacted their lawmakers and they are signing their petitions. Now, opponents are taking their opposition offline and hitting the streets.

German media is reporting (German) that protesters are voicing their opposition to the upload filer and the link tax.

Demonstrators showed up in Berlin to call on the European government to vote against Article 11 and Article 13.

Article 11 is the infamous link tax being proposed. Under those laws, publishers will be forced to pay licensing fees for the privilege of linking to content. Opponents point out that this is a direct attack on the very fabric of how the Internet works. If this were to go ahead, authors would be hamstrung and unable to properly cite their sources.

Meanwhile, article 13 is the notorious censorship machine laws. If passed, the proposed laws will compel platforms to implement copyright filters on every upload their users make. The filters do not recognize fair use such as criticism or satire. As such, many forms of perfectly legal free speech would be blocked at the moment of upload.

It is likely no surprise that demonstrators are taking their opposition to the streets. In Berlin aloe, hundreds of demonstrators made their voices heard despite the rainy weather. The demonstration is one of many held across Europe. They hope that the European parliament will come to their senses and vote against the laws.

Earlier this week, the legal affairs committee (JURI) voted in favour of the Internet censorship laws. The vote is in direct defiance of the will of the European people, the United Nations, and Internet experts and founders.

The European parliament is expected to vote on the proposed laws somewhere around July 3 to July 5.