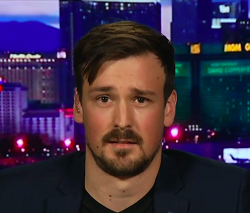 John Matze, CEO of Parler, says that he is now in hiding after receiving death threats directed at him and his family.

Things continue to deteriorate for right wing social media platform, Parler. Following the terrorist attack on Capitol Hill by Trump supporters earlier this month, tolerance for right wing extremism has dropped. As a result, many platforms have been taking action to try and stem further incitement of violence.

One of the targets is Parler, a social media platform that has been accused of housing violent extremism. Amazon, which had it’s Amazon Web Services (AWS) used by Parler, gave Parler an ultimatum. That ultimatum said that either the platform cracks down on extremist material – some of which encouraging further attacks on America – or face getting cut off. From Amazon’s perspective, it appears that Parler did not comply and Amazon, in turn pulled the plug.

In response, the Matze said that he is optimistic that Parler will make a return, but did express doubt admitting that Parler might not come back. Peter Sunde, one of the founders of BitTorrent website, The Pirate Bay, said that the inability for the site to stay online is “embarrassing”.

While the situation seems pretty bleak, things are apparently taking a scary turn. According to court documents, Matze says that he has been the victim of a number of data breaches and is now being forced to go into hiding. He says that he has received threats on his life along with his family. From BusinessWorld:

A new court filing on Friday from the legal team of Parler, an alternative social media platform favoured by conservatives in the US, has revealed that its CEO John Matze and his family are now in hiding after facing death threats and security breaches.

“Matze himself, as the CEO of the company Amazon Web Services (AWS) continues to vilify, has had to leave his home and go into hiding with his family after receiving death threats and invasive personal security breaches,” read the filing.

Earlier this week, Matze told Fox News about the various threats he has received and the measures he would take to protect his family.

“There is a group called UGNazi that is targeting me,” Matze said, noting the controversial hacker group has released many of his passwords and personal information on the internet.

“They published my street address, they threatened to come through my front door,” he added.

If this is true, then none of this is helpful in any way. Obviously, if threats are being made, then it needs to be reported to police. It’s unclear from the report if reports were filed with authorities, though.

The situation in the US continues to remain calm, but tense. Small protests are apparently emerging, but those pro-Trump demonstrations remain generally small. At this point, there are worries of a threat from insiders within the security forces themselves. Authorities say that they are currently looking through their ranks and screening for potential threats. From the Washington Post:

Only small protests materialized outside statehouses nationwide on Sunday after authorities had braced for violence, boarding up windows, deploying National Guard troops and preemptively declaring states of emergency in the wake of the Jan. 6 attack on the U.S. Capitol.

With officials on high alert days away from President-elect Joe Biden’s inauguration, U.S. defense officials say the federal government is conducting insider threat screening on the 25,000 National Guard troops who have begun flowing into the nation’s capital to secure the inauguration, as concerns intensify about extremism in the ranks.

For many, Biden’s inauguration is quite surreal because there hasn’t been this kind of heavy security presence for an inauguration before in living memory. Some worry about what might follow after the inauguration is over as well. Still, if it’s any consolation, the planned attacks on the lead up to the inauguration have, so far, not really materialized.

While that was going on, it seems that there are some additional high profile arrests of people connected to the DC riots. A County Commissioner from New Mexico has been reportedly arrested. From NBCWashington:

A New Mexico county official and founder of the group Cowboys for Trump who had vowed to return to Washington after last week’s riot at the U.S. Capitol to place a flag on House Speaker Nancy Pelosi’s desk has been arrested Sunday by the FBI.

According to court documents, Griffin told investigators that he was “caught up” in the crowd, which pushed its way through the barricades and entered the restricted area of the U.S. Capitol, but he said he did not enter the building and instead remained on the U.S. Capitol steps.

A video posted to Griffin’s personal Facebook page shows Griffin in the restricted areas, according to the affidavit.

In another report, one of the people who recorded video of their insurrection was also arrested. According to a report which features a wide-eyed mugshot of the suspect in question, the FBI is discounting the man’s claim that he was simply a video journalist recording the events. From WUSA9:

John Sullivan, a 26-year-old from Utah, was arraigned on Friday for his involvement in the Capitol insurrection on Jan. 6. Also known as Activist John, Sullivan describes himself as a video journalist who was there to “document the situation.”

While a lot of footage of the insurrection from both inside and outside the Capitol has been seen, Sullivan, who traveled to D.C. from Utah for the riot, recorded what might be the most detailed account of what went on that day.

In the 90-minute video that he recorded, Sullivan is seen charging the Capitol, encouraging others to “join the revolution,” discouraging police officers from doing their job and suggesting the Capitol be burned to the ground.

According to the Department of Justice, Sullivan is charged with one count of knowingly entering or remaining in any restricted building or grounds without lawful authority; one count of violent entry and disorderly conduct on Capitol grounds; and one count of interfering with law enforcement engaged in the lawful performance of their official duties incident to and during the commission of civil disorder.

So, arrests appear to continue to happen. With so many suspects and such a massive amount of evidence to go over, it’s unlikely that the arrests will be slowing down any time soon.