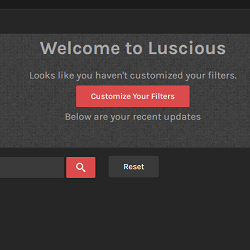 According to the team, an authentication failure on the website allowed for unfettered access to all user accounts hosted by the Luscious database. Usernames, personal email addresses, locations, activity logs, genders, and some full names — exposed through the private email addresses — were available.

The team was also able to view user activity in great detail, including their video and image album uploads, likes, comments, userIDs, followers, and blog posts.

“Some of these blog posts were extremely personal — including depressive or otherwise vulnerable content — and kept anonymous,” vpnMentor says. “Due to this data breach, however, the blog posts are no longer anonymous, with many of the authors’ identities revealed.”

The site operators, for their part, closed the security hole upon notification. This, of course, is one of the better reactions one could hope for in a situation like this. We’ve seen anything ranging from outright denial of a security issue, silence, or even threats of litigation. Non of those reactions ever really help make the situation any better. So, one has to give credit to the operators for seeing what needed to be done and reacting accordingly.

Data leaks when it relates to adult material is somewhat unique. A lot of leaks involve general accounts or financial information. General purpose accounts for different services is, arguably, one of the more benign leaks because it generally involves resetting passwords. It’s still serious, but not as serious as, say, financial leaks when all the tools needed to commit identity theft is there.

when it comes to adult material, data leaks are much more harmful on a social level. Everyone has a vice of some sort. For some, that vice is pornographic material. There are plenty of people who don’t want other people knowing what kind of adult content they view because, at the very least, there is likely going to be a social stigma attached to that. As ZDNet points out, such leaks can theoretically lead to blackmail and harassment.

August has seen a few security incidences so far. Previously, we saw the Suprema/Biostar 2 data leak which saw 1 million citizens and 27.8 million records exposed. Before that, we saw the LAPD data breach which exposed thousands of officers and applicants. Under ordinary circumstances, we would say it’s been a quiet month, but there has been so many other things to report on, some security incidences have been shuffled down the priority list more than anything else.