Our planned series of guides on defeating US DNS censorship is coming to the end. So, last, but certainly not least, we’ll show you what you can expect using something known as a VPN. It’s considered, by some, one of the most secure ways to access banned websites. The downside is that most services are pay services.

You could say a VPN works a bit like a proxy. You access the VPN and the VPN accesses the internet. So, you might ask, what advantage is there to using a VPN over, say, TOR or Foxy Proxy? Well, you might not be able to have access to everything on a given website with Foxy Proxy. With TOR, you don’t have access to things like Flash video (at least, not by design). If you found a way to access these things through TOR, then it won’t be a secure access.

The only thing we are aware of that could possibly access all parts of a website securely besides a VPN is an SSH proxy through a program like . Still, a VPN appears to be the more popular approach. This guide will show you a general way of accessing one so you have an idea what to expect, but how you access it also really depends on the VPN. Usually, the website you get your VPN from will tell you more specifically how you need to connect to their VPN.

Arguably, the most important step in this process and not always an easy one to make. You should choose a VPN you can trust – especially if it’s going to be a pay VPN. We’ve already highlighted 5 VPN’s that can be accessed for free. There is also the VPN run by the people of ThePirateBay called IPREDator (named after IPRED). There is also the VPN service run by the Pirate Party of Canada which was started in response to Prime Minister Stephen Harper winning a majority Conservative government.

If all of the above isn’t for you, you can always browse through other services as well – though keep in mind that not all VPN services are trustworthy, so shop around.

Note: This guide is using Windows 7. Configuring a VPN on another operating system may require different steps.

First, right click on your internet connection icon in your system tray and click on “Open Network and sharing Center”:

In the new window, select “Set up a new connection or network”:

In the next screen, click on “Connect to a workplace” and click the “OK” button. This will allow you to set up a VPN:

In the next screen, click on “Use my Internet connection (VPN): 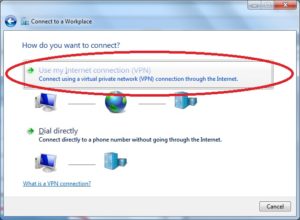 For convenience, we’ve ticked “Don’t connect now; just set it up so I can connect later”. Click Next. At this point, you’ll just type your username and password (probably the same username and password you used to get the VPN account) You’ll have a number of other options available (you’ll probably be told if you need these by your VPN provider). Click “Create” when done.

Step 3: Connect to Your VPN Connection

Single click on the network icon (the same icon you used to start configuring your VPN). You should find your VPN connection in the list of connections you have available to you. Click on the VPN and click “Connect” You’ll be prompted for your user name and password again. Simply type in the user name and password you used before and whatever other credentials are necessary. When done, click on “Connect”. You should be connected to your VPN now.

That should do it! For more instruction, you should consult the documentation provided by your VPN provider. Again, this is to give you a general idea of how to connect to a VPN without installing software.