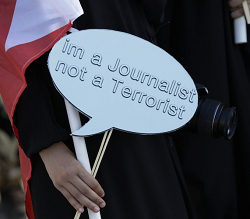 The morning of day 4 sees some leads change in the US elections. We also talk about the impact Trump has had on journalism.

The process of seeking results continues to drag on. This morning, there doesn’t appear to be a clear winner still.

On the day of the US elections, there was hope for a quick resolution. It would have been just like many elections in the past where a winner is ultimately projected the night of the voting. As we know now, that didn’t happen. On day 2, frustrations began to set in with many pointing out that the election is ultimately a referendum on the people of the US. The hope for many around the world that Biden would win in a landslide. That clearly never happened. Some were hoping that, maybe, just maybe, we could finally get a result by day 3. On the evening of the election, some were predicting a result by Thursday. That didn’t happen either.

Now, here we are, the morning of day 4 and the election is still too close to call. There is, however, a silver lining to all of this. There is some movement in the leads in states that haven’t been called. There are at least four states that haven’t been called: Georgia (16), Nevada (6), North Carolina (15), and Pennsylvania (20). There is one state that different sources cover differently: Arizona (11). Some sources have called the state a victory for Biden which pushes his electoral college vote total to 264. Others have held off on calling the state and left that number at 253.

So, if you work the math, assuming Biden has won Arizona like the Associated Press did, all Biden needs is to win any one of the remaining uncalled states. Nevada, which holds the largest lead for Biden, has a mere 6 electoral college votes. That would be enough for Biden to get 270 on the nose. That fact likely is what is causing many to say that the likelihood of a Biden victory is looking pretty good at this point.

As mentioned, there is some slight movement in things today unlike yesterday. Previously, Georgia and Pennsylvania both showed a lead for Donald Trump. This morning, those states are now showing a Biden lead. This slight shift makes Trumps prospects seem even more dire than they were 24 hours ago. That is where things stand at the moment.

With that said, we wanted to look at the impact Trump has had on journalism and offer our own take on things as well.

Donald Trump is, of course, famous for screaming “fake news” whenever there is unfavorable coverage of him. He even declared journalism the “enemy of the American people”. As Reporters Without Borders explained last year, this violent attack on journalism has led to real harm on journalists. Reports suggests that there have been threats of arrests and actual assault on journalism thanks to the violent rhetoric from the impeached president. At one point, Trump even threatened to open up libel laws to make it easier to sue journalists for doing their jobs.

Of course, the consequences stretch far beyond what is in the headlines. Public confidence in journalism has generally fallen. In our experience, even the phrase “journalist” has been relegated to a curse word in some instances. While nothing has really changed for journalists, the reception of what they (and we) do has. For us non-partisan journalists, the evaporation of any perceived middle ground has meant that people more frequently react to our coverage in the lens of “whose side are you on?” This has meant attacks from both sides of the political spectrum just because of our perspective of being an objective observer of what is unfolding in our daily lives.

Some outfits have reacted to this by trying to move the objectivity to try and offer a perceived sense of neutrality. Far right elements are given a much broader platform then they would otherwise in a vain effort to thwart accusations of bias. The end result is that extreme right wing ideology has become more normalized. In the ironic quest of appearing to be neutral, some news sources have effectively ejected actual objectivity to coddle the more extreme elements of American society.

This shift has been felt for me personally. In years past, whenever I speak to people, whenever the subject of my “night job” of being a journalist pops up, it is generally been met with positive reception. I get questions like, “oh, what do you cover?” and the conversation evolves from there. Ever since Trump started to run for office, the reactions tend to be more mixed whenever I mention that I am a journalist. I still get some people who are interested in what I cover, but for others, there is a range between disinterest to outright hostility. In one instance I can recall, one person reacted by saying, “You’re one of those? I hate journalists!” before the conversation ends.

For me personally, my mission has remained the same: understanding the big picture and understanding what is happening in the world of digital rights. If something positively or negatively impacts those, lay out how. As with so many other journalists, nothing has changed on my end, but the reception has thanks to an increasingly hostile political landscape. While I don’t bother hiding what I do, I can see why others would much rather keep their heads down and try not to attract too much attention to themselves.

The change really does suck. There are plenty of journalists, myself included, who are unaccustomed to this kind of negative reaction over a simple career choice. I think, for a lot of journalists out there, the hope is for a Biden win simply because it offers the promise of some relief to the hostility directed towards our profession. When an honest, neutral assessment of a situation is met with scorn, everyone loses.