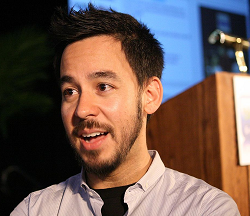 In an effort to try and stop the repeal of network neutrality rules, celebrities have also lent their support to the cause.

We are now two days away from the Federal Communications Commission (FCC) vote to repeal network neutrality rules. The move to repeal the rules have sparked considerable backlash from ordinary Americans and big players alike. In spite of the groundswell of people fighting to protect the open Internet in the US, FCC chairperson continues to dismiss the movement and even mocked the situation at a gala event.

Still, many Americans are continuing to push back. Today, we are learning about various celebrities who are supportive of network neutrality. In turn, they are lending their voices to the cause. According to Billboard, Mike Shinoda of Linkin Park is urging his fans to fight for the open Internet. From the report:

Other celebs, including actress Evangeline Lilly and singer Margo Price, have urged opponents to #BreakTheInternet and call their representatives to stop the action.

All I want for Christmas is net neutrality…

Today is a big day of action to #BreakTheInternet to save #NetNeutrality before the @FCC votes to kill it on Thursday. Our friends at @fightfortheftr have made it easy to participate. Head here and please share! https://t.co/HeF57y0ggh
— Women’s March (@womensmarch) December 12, 2017

Not sure why #NetNeutrality matters?

This latest push echoes earlier efforts from various people and groups pushing to defend network neutrality. Earlier, we reported on an open letter signed by many big websites urging the FCC to not scrap the rules. Drew Curtis of Fark went even further by calling promises made by ISPs to not change anything on the Internet a “bald-faced lie“.

If anything, it shows that Americans will not just roll over when asked to give up the open Internet. If anything, it shows that many of them are willing to fight tooth an nail to defend the Internet. The support comes from virtually all walks of life from CEOs of large websites to celebrities right down to ordinary American’s alike. It’s not unreasonable at this point to say that a number will fight to the bitter end if they have to.

The vote is still expected to take place on December 14th.