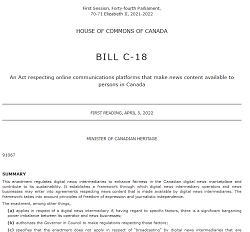 A Charter statement about Bill C-18 was posted, but was then quickly removed. It confirmed that it is, in fact, a link tax.

While Bill C-11 has been soaking up a lot of attention lately, Bill C-18 is still hanging around in the background, not going anywhere. Bill C-18, of course, is Canada’s notorious link tax legislation. We posted an analysis of the link tax back in April. It was clear back then that this is, in fact, a link tax. What’s more is that the legislation not only takes great pains to include as many kinds of links as possible from the payment side of things, but also takes great pains to eliminate the competition to large established media players from ever receiving a nickel from it as well.

In short, the legislation accomplishes two things. First, it allows the traditional media sector to freeload off of a completely separate industry under the lie that other platforms are “stealing” their content when they link to them. Second, it permanently tilts the sector into the favour of traditional established publications by putting a price on every link and starving out everyone else. It’s blatant anti-competitive practices baked straight into legislation. In the process, it completely upends how copyright works in an unprecedented way where payments are required to simply reference other material. This doesn’t exist in any other discipline and attacks a major building block of the Internet: hyperlinks.

Some have, seemingly for the sake of being polite, refrained from calling this a link tax – often with reasoning that basically does everything it can to redefine what a link tax is. To date, however, we haven’t seen a very convincing argument that the legislation isn’t a link tax. Ultimately, Occam’s razor certainly applies in this case. It’s the argument of, “well, it’s not really a link tax because it just requires compensation from large platforms who happen to link to them, but for the reason that it doesn’t quite operate link Australia’s link tax, it’s not really a link tax because it’s a bunch of coincidences that it sounds like a link tax” vs “it’s a link tax”.

Recently, the Canadian government posted a Charter statement on Bill C-18. The statement left little doubt that this legislation is, indeed, a link tax. However, i you browse the page where it was posted, the statement was since removed and all references were scrubbed from the site. University law professor, Michael Geist, was able to grab a copy and post it on his site. He offered these comments regarding the whole debacle:

While the government will surely argue the bill is Charter-compliant, the arguments presented in the statement are exceptionally weak. For example, the statement misstates the goal of the bill:

The goal is to support news businesses to negotiate and receive fair compensation when third parties with a dominant market position monetize their news content in a market environment that has been disadvantageous to news businesses.

In fact, there is no reference or requirement for the platforms to monetize news content in order to be captured within its scope. Bill C-18 adopts an extreme approach in which compensation is contemplated merely for facilitating access to news, which extends far beyond reproduction and has no direct link to monetization.

While the statement suggests that individual links do not “automatically or necessarily require” compensation, the reality is that by treating links as a compensable activity, they will be factored into compensation within negotiated agreements or arbitration. The impact of treating links or indexing information as compensable raises serious concerns regarding new barriers to access to information. A Charter challenge would undoubtedly argue that the bill is far too broad in this regard, since a bill that was truly carefully tailored to its objectives would be limited to direct monetization or reproduction.

His comments go on to describe how the governments argument that this legislation represents minimal market intervention was also completely undermined by the Charter statement.

The current status of the legislation is very similar to that of Bill C-11. Currently, the Senate is running out of days it could theoretically sit before breaking for the Summer. In fact, this Friday is the last day the Senate could sit before the Summer break. The House of Commons has already adjourned for the Summer as it is. Currently, according to the government website, Bill C-18 has only completed second reading in the House of Commons and hasn’t had anything go on in the Senate as of yet. So, it’s definitely much further behind than the governments other anti-Internet legislation. All this means is that the legislation has been delayed by the Summer break.

Still, like Bill C-11, Bill C-18 will no doubt get heavily pushed once the break is over. So, this really is a good news, bad news situation. The good news is that Canadian’s won’t see this bill passed until at least September. The bad news is that the legislation will face little resistance and there is a very good chance that this bill passes once government is back in session. It’ll take a little more time than Bill C-11, but it is not that far behind in the grand scheme of things.

As Geist rightfully points out, this legislation is ripe for a court challenge once this is passed. Similarly to Bill C-11, there are constitutional questions involved with this legislation. Indeed, aggregators and platforms would be discouraged from linking to Freezenet because we do publish news. However, because of the nature of the market, there is little chance that we could add ourselves to a cartel and be compensated. As a result, there is a very real chance that search engines will downrank our site. That would be extremely bad news because, like so many other sites our there, Freezenet gets a considerable amount of valuable traffic from search engines. The effect is that we would see what little ad revenue we get dwindle down to nothing and ensure that audiences would never find our site no matter how much Search Engine Optimization and posting about popular topics we put into the site.