As debate continues surrounding Bill C-10, it seems that a regulatory hit list is being built behind the scenes according to a newly released memo.

While supporters continue to grasp at trying to find an excuse to say that Bill C-10 doesn’t regulate user generated content, the work going on behind the scenes in the Canadian government tells a much different story. A memo that has recently been published is listing out in great deal how Bill C-10 will regulate Internet content. It even goes so far as to start listing off the sites and services the regulations could hit – a regulatory hit list if you will. From Michael Geist:

The document was obtained by Postmedia journalist Anja Karadeglija, who first reported it last weekend, focusing on departmental warnings about the importance of excluding user generated content from the scope of regulation in Bill C-10 and the necessity of Sections 2.1 and 4.1 (Section 4.1 was removed by the government). The memo states:

“Social media services like YouTube and Facebook greatly expand the number of individuals and other entities that can be said to be transmitting programs over the Internet. This provides an important limitation on the application of the Act by ensuring that under the Act the CRTC cannot regulate the audio or video communications of individuals (or other entities) simply because they use a social media service.”

The government obviously ignored the warning and removed the limitation. The document continues by identifying a non-exhaustive list of services that “are likely to regulated under the Act.” The department acknowledges that some services may be exempted by the CRTC, though there are no specifics in the bill that identify thresholds for exemptions. Even if exempted, services may still be required to register with the CRTC and provide confidential commercial data in order to obtain an exemption. Indeed, the default approach is that all services are subject to Canadian regulation, leading to a dizzying array of regulated services identified by the department. Those mentioned in the government document include:

That is a pretty extensive regulatory hit list to say the least. What’s more is the memo goes into detail about how a site or service can get added to this hit list: 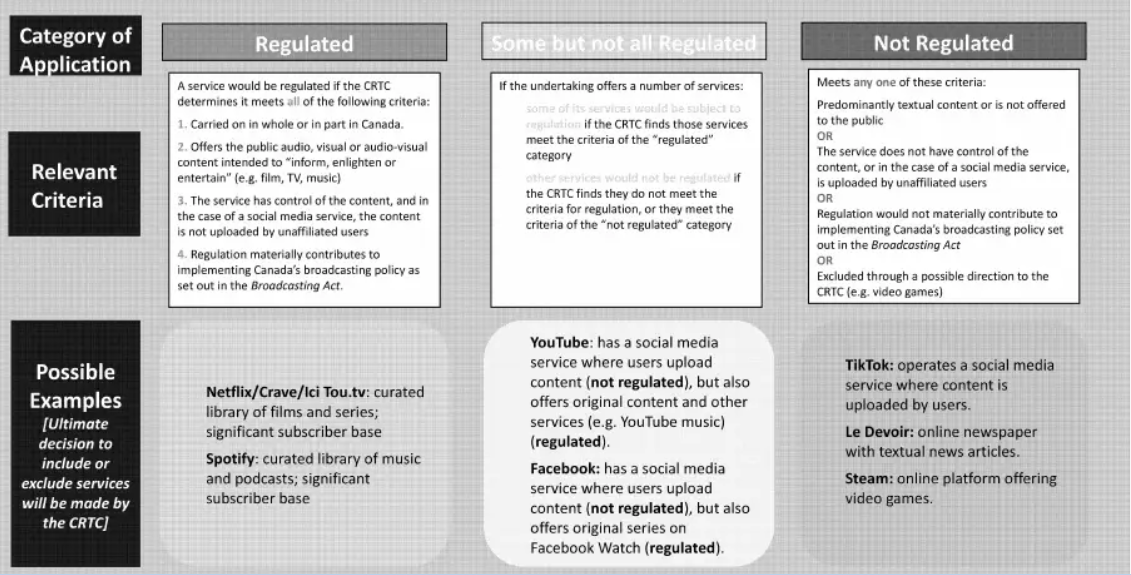 As a news site ourselves, it looks like we fall within the category of a service that would get hit with this regulation, though the last point under the regulated point leaves us scratching our head. Specifically, whether Freezenet “materially” contributes to Canada’s broadcasting policy. As a Canadian content creator, that easily raises the possibility of how we could be harmed by the new legislation.

Our podcast is also distributed on a number of the mentioned “audio” portals as well. So, one way or another, it appears as though that we are going to be hit with regulations. At any rate, another angle that could mean our content creation endeavors would get harmed by the legislation.

Of course, the ambition by the Canadian government is taking a lot of people off guard. Some could easily have thought that this is going to just affect Canadian operations as well as large portals. As it turns out, the legislation is also going to target foreign websites on top of it all. This makes it clear that the Canadian government is taking a “regulate them all” approach here.

This is where it becomes evident that the Canadian government clearly hasn’t thought this plan through, well, at all, really. How does it intend on enforcing it’s regulations on sites that really could care less about Cancon requirements? What’s more is if non-Canadian services continue on as per normal and Canadian services are forced to jump through hoops, that inherently puts Canadian innovation and creativity at a disadvantage to the rest of the world.

Not that it was needed, but for those who still insist that Bill C-10 is no big deal, this latest government document once again nukes the credibility of those comments from orbit. If the government really isn’t regulating Internet content, then why go through this much detail and planning on how it can move forward with heavily regulating the Internet?

What’s more is that when you throw in services like VPN’s, proxies, and the TOR network, enforcement of any kind suddenly becomes impossible in any practical sense. If blocking becomes a solution of choice, then such services might see an uptick in services. That’s exactly what happened in 2018 when network neutrality in the US became an uncertain thing. Users began fleeing to the safety of VPNs in the wake of a possible destabilization of Internet freedom. Not only would such a move make sense on the part of Canadians, there is also indirect precedence for this as well.

All of that doesn’t take into consideration the potential litigation that this legislation could face if it actually passes. There is a good likelyhood that Bill C-10 could get struck down in the courts on free speech grounds.

At any rate, nothing about this says that the government totally thought all of this through. It’s clear the government simply chose to stick to a highly flawed view of the Internet and decided to regulate accordingly. Not something that typically ends well.