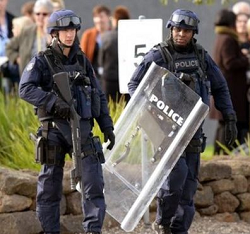 Australia has pretty much dispensed with all pretense. They are using their anti-encryption laws to go after journalists.

In December of last year, Australia passed their anti-encryption laws in a rushed process. A key selling point for the laws is that it would be used to go after “bad guys”. Those “bad guys” include terrorists, child abusers, and other lawbreakers.

Now, it seems that Australia is beginning to dispense with all pretense. Reports are surfacing that the country is using the Assistance and Access Act (AKA the anti-encryption laws) to go after journalists. These laws are now responsible for at least one police raid of a news organization. From The Guardian:

The anti-encryption laws passed by the federal parliament last year have been used to bypass journalist protections in other national security laws, a cybersecurity researcher has said.

It was this new power the Australian federal police relied on, in the now-infamous photos of AFP officers clicking through and reviewing files for hours on end at the ABC headquarters.

The Department of Home Affairs admitted to using the new power in a submission to the review, stating the AFP relied on the power in raiding the ABC and the Canberra home of News Corp journalist Annika Smethurst in June.

“In June 2019, the Australian federal police executed two search warrants in relation to secrecy offences in part 6 (offences by and against public officers) and part 7 (official secrets and unlawful soundings) of the Crimes Act,” the Department of Home Affairs stated.

“In executing these search warrants, the AFP used section 3F of the Crimes Act, which was amended by schedule 3 of the Assistance and Access Act.”

This undermined protections granted to journalists under other national security legislation, said cybersecurity researcher Riana Pfefferkorn, an associate director of surveillance and cybersecurity at the Stanford Centre for Internet and Society.

This marks a dramatic escalation in how things are turning out in Australia thanks to these laws. In fact, it is basically a worst case scenario coming true. Already, we are seeing innovation and investment go through an exodus out of the country.

If anything, this will likely further motivate private companies to seek shelter off shore. Additionally, this proves that anti-encryption laws are a major threat to journalistic activities – not to mention what a direct threat to free speech this represents.

What’s most disturbing in all of this is that it took less than a year for the situation to deteriorate this far. In fact, we are looking at a mere 7 months before police started raiding journalism outlets. One things for sure, the situation has now gone from ugly to scary.