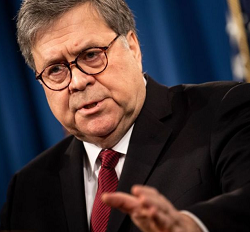 It seems that the war on encryption in the US is heating up. William Barr is vowing to crush “warrant-proof” encryption.

We’ve been observing America’s latest round in the war on encryption bubbling to the surface in recent weeks. Earlier this month, we reported on how high ranking officials in the Trump administration suggest that they are contemplating banning any encryption they can’t break. Those contemplation’s alone received pushback from a number of different sources.

While things have been a bit quiet on this front for a little bit now, it seems that the Trump administrations push to crack down on encryption is now heating up. According to documents obtained by the New York Times, Barr opined that criminals are using so-called “warrant-proof” encryption to evade detection. From the document:

By enabling dangerous criminals to cloak their communications and activities behind an essentially impenetrable digital shield, the deployment of warrant-proof encryption is already imposing huge costs on society. It seriously degrades the ability of law enforcement to detect and prevent crime before it occurs. And, after crimes are committed, it thwarts law enforcement’s ability to identify those responsible or to successfully prosecute the guilty parties. These costs will grow exponentially as deployment of warrant-proof encryption accelerates and criminals are emboldened by their ability to evade detection.

NBC is noting that this isn’t the first time America attempted to carry out a war on encryption. From NBC:

Barr’s words echoed those of government officials going back more than 25 years who have called for the government’s ability to bust through strong encryption, which can make data held on a cellphone or computer almost unreadable to anyone who does not possess the password to decrypt it.

It’s a message security experts have heard before and expect to hear again, particularly now that some major tech companies have embraced encryption as a way to promise security to consumers who are starting to take privacy seriously. Facebook recently announced that it would expand its use of encryption in its apps. Secure messaging apps like Signal have become considerably more sophisticated and easier to use.

“This is the groundhog day on encryption policy that I’ve come to expect,” said Matt Blaze, a computer science professor at Georgetown University.

Barr’s complaints — and those of Justice Department officials going back to the 1990s — centered on what it means for government investigators. He did not offer a specific way that the government should go about, either technically or legally, defeating encryption.

Australian authorities argued that there is a fear of criminals “going dark” and that a crackdown on encryption was not only necessary, but needed immediately. After rushing through those laws, the tech sector freaked out. Innovation and investment made a mass exodus out of the country including multinational companies from China and Russia.

Of course, most troubling of all is that authorities took those new found powers, circumvented journalistic protections, and conducted multiple raids in various media outlets. This wound up being part of an effort to crack down on journalism that holds government to account. Those actions, of course, drew fire from Reporters Without Borders.

While the future of democracy remains uncertain in Australia, it looks like the US might be heading down this exact same path. Already, the country has been cracking down on free speech for years thanks to copyright laws going way too far. With a Trump administration in a constant war on journalism, it’s likely that someone somewhere in the administration found an opening to end all accountability once and for all. With the UK and Germany also considering cracking down on democracy enabling encryption, this multinational effort only stands to grow in power in the coming months and years.