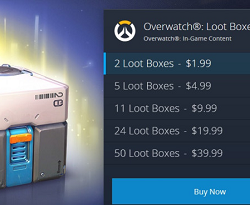 UK MPs are proposing that loot boxes in game should be classified as gambling. As such, they suggest banning them for children.

Of course, game companies have a financial interest in trying to argue that loot boxes are different. This is because gambling is typically age restricted. Should their games get age restricted, then they risk seeing a chunk of their audience disappear.

In one example of a game company making a, well, not so successful attempt at differentiating loot boxes and gambling, an executive from EA argued that loot boxes are not gambling, but rather, surprise mechanics. He tried comparing them to Hachimals and Kinder Eggs. The comparison has since been mocked online.

Now, the debate is taking a more serious turn. UK MPs in a committee recommended banning selling loot boxes to children and classifying them as a form of gambling. From Tech Crunch:

The Department for Digital, Culture, Media and Sport’s (DCMS) parliamentary committee makes the recommendations in a report published today following an enquiry into immersive and addictive technologies that saw it take evidence from a number of tech companies including Fortnite maker Epic Games; Facebook-owned Instagram; and Snapchap.

The committee said it found representatives from the games industry to be “wilfully obtuse” in answering questions about typical patterns of play — data the report emphasizes is necessary for proper understanding of how players are engaging with games — as well as calling out some games and social media company representatives for demonstrating “a lack of honesty and transparency”, leading it to question what the companies have to hide.

“The potential harms outlined in this report can be considered the direct result of the way in which the ‘attention economy’ is driven by the objective of maximising user engagement,” the committee writes in a summary of the report which it says explores “how data-rich immersive technologies are driven by business models that combine people’s data with design practices to have powerful psychological effects”.

As well as trying to pry information about of games companies, MPs also took evidence from gamers during the course of the enquiry.

In one instance the committee heard that a gamer spent up to £1,000 per year on loot box mechanics in Electronic Arts’s Fifa series.

A member of the public also reported that their adult son had built up debts of more than £50,000 through spending on microtransactions in online game RuneScape. The maker of that game, Jagex, told the committee that players “can potentially spend up to £1,000 a week or £5,000 a month”.

One thing is for sure, a lot of money is on the line for game developers. A number of them will no doubt fight this tooth and nail. At the same time, plenty of people will point out the morally questionable concept of possibly exposing children to gambling. After all, gambling addiction is a very real thing. Exposing children at earlier than expected ages to such a thing can easily be unsettling for some.

What will be interesting to see is which side will win out. If the UK starts classifying loot boxes as gambling, how many other countries are going to start following suit? Either way, it’s another classic political battle and it could have pretty big ramifications.