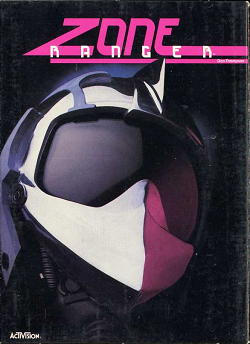 In this review, we give the Atari 5200 game Zone Ranger our best shot. We find out how well this top down shooter plays.

The game starts you out in the middle of space. The green segmented lines are hints to the location of where the key enemies are located. The enemies form a grid in the region and the objective, though unclear at first, is to destroy all of them in order to move on to the next round.

Along the way, you’ll encounter asteroids and the odd alien ship. Since this is level 1, the biggest threat is ultimately the asteroids as you risk slamming into them by accident. Also appearing on this level are various warp points. These colorful circular objects will warp you to a random location on the level when you fly into them. Ultimately, they may prove to be unhelpful because you have to re-locate the green pathways again. This will cost you time. The only time they are likely helpful is when you are under threat of destruction and warping out of there may be your only safe option.

Also on this particular level is a square warp point. This warp will warp you all the way to level 7 (assuming you are lucky enough to find it of course). There are pros and cons to this. The major pro of this is that you get a massive number of bonus points for finding this (over 7000 points actually). The downside is that you don’t earn extra ships from all these bonus points. You’ll also encounter a much more difficult level on the other side.

On occasion, you’ll also encounter these floating yellow/brown spiky things. These are collectible items that grant temporary invulnerability. Once you collect it, you’ll get a meter that gradually drains. As long as you have this meter going, you can fly through asteroids and enemies. Enemy fire becomes nothing more than eye candy. The downside, of course, is the fact that this ability only lasts for a limited period of time. So, be careful when you are about to run out.

One final thing you might encounter (even in the first level) are yellow maze zone objects. These are a sort of bonus level you can encounter for points. To use it, fly your ship into it. Once inside, you’ll find yourself in a blue obstacle course that almost makes this game like a top down racing game. Time will slow down dramatically as you move your ship around here. Anything that is blue will allow you to harmlessly bounce your ship off on. However, if you encounter pink obstacles, touching those will mean instant destruction. You lose a ship and you get warped back outside. For every flashing object you collect, you’ll earn 50 points. You can leave at any time by flying into the yellow shimmering squares.

Another threat to your mission is the time limit. The time will keep ticking down as long as you are still in outer space. If you die, the timer will only briefly pause until your ship respawns. At that point, the timer continues to tick down. If you complete the level before the timer reaches zero, then you earn bonus points for all the seconds you managed to keep on the clock. If the timer does reach zero, however, your ship will self-destruct and you’ll end up losing a ship. The only upside is that when your ship respawns, the timer resets.

As you advance through the levels, you’ll notice that you can earn free lives. The game starts you out with three. For every 1,000 points, you earn an additional free life. While it is more than possible to earn 1,000 points within a later level, a lot of ships are earned with the bonus points for completing a level. This makes the game much more of a survivable experience.

If you make it to level 3, you’ll encounter a bonus level. In this level, all you have is the grid of ships and regular warp points. A fairly straight-forward mission to say the least. The goal is to destroy the grid as quickly as possible. Otherwise, you earn no bonus.

In later levels, you’ll encounter more complex enemies. Some ships just fly around you. Others will self destruct and send deadly debris at you. Some will just fly randomly past you. As you progress into later levels, enemy ships will be more aggressive. They’ll be more inclined to fly into you. A later enemy is the diamond one. If you happen to shoot it, you’ll destroy one of four parts. The other three parts will become active and start flying directly towards you.

Whether this starts on level 6 or level 7, I’m not sure, but somewhere in there, the green lines will start turning brown. While the green lines are harmless, the brown ones will actually kill you. Being careful around this is a must.

The big problem I have with this game is that the mission objective isn’t all that clear in the beginning. It requires a certain degree of trial and error before a lucky guess makes the objective crystal clear.

Another thing that would have helped this game is some kind of ability to add time to the timer. In earlier levels, this isn’t a huge deal, but in later levels when you are avoiding enemy fire, this would have been nice to have.

Still, there is a decent amount of action to be had in this game. The constant evolution of levels also helps keep things interesting as well.

Generally speaking, a few things would have improved on this game such as making the main objective more clear and the ability to add more time. The constant evolution of the enemies and the blue zone’s as levels go by are a nice touch. This game is both approachable and challenging.

Graphics are OK. This game isn’t exactly a graphical powerhouse like some other games made around the same time, but they weren’t bad either.

There wasn’t hardly anything in the way of music or jingles. the sound effects were OK, but nothing huge. Would have liked to heard more on the musical front myself.

Overall, this is a pretty solid game. It could have been better with more clear objectives and an ability to add time to the clock. Still the constantly evolving levels and extras did keep things interesting. The game is approachable in the first level or two and the game is very challenging by the time you get to level 5 or 7. The graphics are decent enough, though the audio could have been better with something more in the musical department. So, a pretty good game overall.