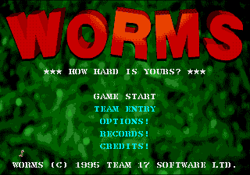 In this review, we break out the bazooka in the Sega Genesis game Worms. We find out if this strategy game is worth playing.

This game was released in 1995. We already have some familiarity with this franchise. Previously, we reviewed Worms:Armageddon for the Game Boy Color. That game got a decent score, though has a number of notable flaws. We also tried Worms World Party for the Playstation. That game got a great score and has a notably excellent theme song. Finally, we tried Worms:Armageddon for the N64. That game is notable for being the greatest game we’ve ever played to date. So, we thought we’d wind back the clock and try the original Worms game to see how it plays.

You have the option of either editing or creating whole new teams of worms. By default, everything is seemingly set as human played teams. If you want to take on the computer opponent, you’ll have to toggle the setting from human to computer in the options.

Other options you can mess with is the arsenal options. You can pretty much set most weapons to either unlimited or limited. Additionally, you can even remove a weapon from the inventory altogether. You can also enable super weapons like the banana bomb, minigun, and sheep. Unfortunately, you’ll have to collect those in the weapon drop crates (we never got them ourselves).

In addition to this, you can adjust game and turn time. Also, number of rounds can be adjusted as well. Do note that in a four team match, each round last about 10-15 minutes. Interestingly enough, retreat time isn’t available in this game.

When you are ready, you can play a game. You can either play a league or friendly game. When you go into a league game, you can select which teams will be playing for a maximum of 4 teams. When ready, you can start the match.

In the game itself, the “A” button fires a weapon, “B” allows you to jump (only one jump can be performed in this game), and “C” brings up the menu. The menu initially gives you some match options. Press “C” again and you’ll get access to the first weapons menu. Use the cursor and press “A” on the weapon of your choice.

The weapon you can get in this game include dynamite, bazooka, grenade, shotgun, uzi, teleport, air strike, fire punch, and dragon ball. Each weapon has their own capabilities.

If you press “C” a third time, you’ll get a list of movement and other weapons. Movement items include torch and drill. You also have access to surrender, kamikaze, skip go, and the small number of super weapons available in the game.

The goal is quite straight forward. You need to use your turns efficiently to wipe out all the opponents worm. Last team standing wins the match.

After you complete a game, you’ll be assessed based on how well you did. Various stats will be updated on the games internal leader board. Beyond racking up good stats on the leader board, the game has no real discernible broad objective outside of winning matches. There is no real ending to this game, so you basically play until you are bored with the game.

At its core, this game has a lot going for it in terms of overall fun factor. You can easily tell that there is a lot of fun to be had here. The problem is that this game is very rough. The lack of any real ending is one of those flaws.

In addition to this, the AI of computer opponents also has its share of flaws. When the computer player attempts to skip go, it often needs to select it three times before it finally uses the option. In addition to this, the AI sometimes can’t figure out what is sufficient distance and ends up shooting itself (typically with shotguns or uzi’s). Dynamite can also be problematic as the computer will direct a worm to jump against a wall, ultimately blowing itself up in the process. While the computer isn’t exactly a pushover, it does have its share of problems as well.

Friction can be a little strange as well. Trying to encourage side-to-side movement can prove to be surprisingly tricky. Any jump along the way can stop a worm dead in its tracks when it’s being sent different directions from various blasts.

The lack of any distinctions between worms can make it a little too easy to accidentally hit your own worms. The need to know your worm team members names becomes paramount as that’s the only way you can find your own worms in the midst of a chaotic battle.

Generally speaking, this game has a number of interesting ideas. Unfortunately, it’s quite rough around the edges. The AI flaws. The friction is a little bit much and the physics has its issues. In addition to this, it can be difficult to tell which worm is yours because the names are the only thing that distinguishes each one. Still, the underlying ideas of this game does permit this game to have its moments. It can be quit entertaining to send worms into the drink. So, a flawed, but interesting experience.

Graphically, this game is alright. While the little vests on each worm is a nice touch, the tiny worm sizes can be problematic when trying to line up different attacks. The terrain and background is nicely done, though the water is a bit on the basic side. It’s OK, but nothing huge.

The audio is a bit of a weak spot for this game. The theme song really takes up much of the slack in the menu systems. Unfortunately, the lack of music in the gameplay itself makes the experience a bit bleak. The sound effects are pretty good, though doesn’t make up for such a lack of any real music in the game.

Overall, this is one of those games that holds a lot of promise. Unfortunately, its various flaws keeps the game itself at bay. The underlying concepts are very well thought out. Unfortunately, the execution leaves a bit to be desired. The issues with the AI, physics, and friction prevents this game from being a solid one. The lack of any overall objective outside of winning matches doesn’t really help matters. The graphics are pretty good, but the audio is a little weak. If you can look past the flaws, it’s pretty good, but this game ends up being merely half decent in the end.