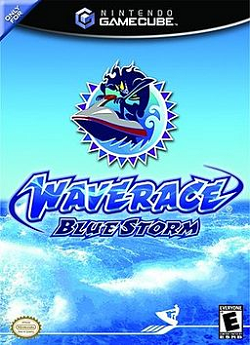 In this review, we dive into the racing game Wave Race – Blue Storm. We find out if this game is worth trying.

This game was released in 2001 and is a sequel to the N64 launch title Wave Race 64 which got a positive review here. Wave Race – Blue Storm, incidentally enough, is a launch title for the Game Cube.

One thing that is definitely apparent is the fact that all of the positive energy that was present in the N64 predecessor was toned down. Instead, this game seems to go for a more laid back, yet competitive angle. This was a rather odd direction for this game series to go if you ask me, but I went with it.

Another thing that is definitely different is that not only were the number of characters greatly expanded, but also the number of racers you’ll have to compete with in each championship race. This certainly adds more flexibility in finding the character that best suits your racing style.

In the championship races, a lot has largely stayed the same. You have to pass the buoy’s on the appropriate side. For each one you pass correctly, you get another light added to your turbo meter. If you pass 5 in a row, you can get an actual turbo. Hitting the turbo button will give you a general speed boost. The actual nitro’s is a new concept because the N64 version simply has turbo as how well your watercraft can perform. This was done away with in favor of an actual turbo. If you miss a buoy, you lose all the lights you’ve earned along the way. If you’ve earned a turbo, you lose that turbo as well.

A new feature in the racing is the fact that if you pull of stunts during the race, you can get up to three lights added to your total turbo gauge.

Turbos, generally speaking, should be executed on strategic portions of the course. In a corner with lots of buoys to navigate would not be the greatest place to fire a turbo. On the other hand, on nice straightaways are ideal to give yourself a speed boost if you have one available.

Turbos can also be used if you have fallen partially off of your water craft. You can go almost as fast as normal and even retain some of your steering capabilities. So, if you bump something, fire off a turbo and you’ll be able to absorb that hit for the most part and retain your position in the race for the most part.

Another strategic place to fire a turbo is when you know a buoy is simply out of reach. If you know you’re going to miss it, use the turbo and blast pass it. If you’re going to lose that turbo, might as well put it to use anyway, right? This, of course, depends on where you are on the course in determining whether or not this is a good idea.

Another element making a return is the 5 miss system. If you miss 5 buoy’s, you’ll be forced to retire from the race. These 5 chances are available for every race regardless of championship difficulty. Sometimes, this can be used to your advantage because if there is an out of the way buoy and you have multiple chances left, skipping it on the third lap before the finish line can help you either boost your lead or catch up to other opponents if you’ve fallen behind.

A major criticism I have for this game is the controls. Generally speaking, you have to plan further ahead of you for where you want to go. So, if you turn left, you won’t exactly turn right away. If you turn left, then right, it depends on weather and how far you turn how long it takes for you to make that second turn. On easier courses, this isn’t too much of a problem, but as you get to the harder courses, the challenge becomes more and more about fighting with the controls more than the difficulty of the course and your opponents. The controls, ultimately, is a critical flaw in this game as it both kills the enjoyment I can get out of the game by a lot, but also the replay value on top of it all. The controls in Wave Race 64 were far more player friendly.

The courses had some pretty decent design going for it. While the new courses introduced in this game were pretty neat, a lot of the design elements that were borrowed from this games predecessor stole the show. Courses like Southern Island and Aspen Lake (which is loosely based off of Drake Lake) were major highlights of the game. This is both great and not that great. It’s great that designers knew which elements to pull from the N64 version of this game. It’s not that great in that the originality was overshadowed by what was put forth previously.

One great addition to the game was the inclusion of breakables. The railings on the boat you jump over in Southern Island could be broken apart if you didn’t clear the boat completely. Random boxes and certain markers could be blasted through. This, I felt, was a nice, though necessary, improvement to the overall gameplay.

One element I thought was poorly thought out were general animations at the end of racing and the podium scenes. With the racer I used, if I won, he jumped onto the front and did a backflip. This occurred every single time I won. If I placed well, but didn’t win, I got a general fist pump. A poor placement meant he kicked the hovercraft. At first, this wasn’t that bad of a thing, but then you realized that this is all you got in terms of character animations. I would have thought a little more variety would have been better. Even two for each outcome randomly selected would have been OK, but to have only one gets rather repetitive. What’s worse is that if you won the championship, three racers are placed at a portion of the course while the announcer announces the names and gives a congratulations. If you win, you get treated to the exact same victory celebration (in my case, the exact same backflip). In one case, I got basic fireworks added to this, but that was it. Even if this game copied the ending sequence to Wave Race 64, it would have been far better than what we got here. Even the ending was a bit anti-climactic in that all you really got was random pictures and the watery effect as the names are spelled out. So, that was a bit of a letdown.

If you ignore the controls issue, I thought that the difficulty curve was reasonable. The easy races allow you a chance to get used to how the game plays (however well you can manage this) and by the end, you are definitely challenged to the limit to how well you can race. This game also has a nice sizable amount of content along the way between melting glaciers and falling cargo containers along with moving boats floating around. The start sequence varies between course which was definitely a nice touch.

There were other modes as well. Stunt mode was largely borrowed concepts from the previous game with the added bonus of having a 100 point ring. So, if you clear a 50 point ring, you get 50 points. Clear the next 50 point ring, you’ll get 100 points (for a total of 150). If you then pass through a 100 point ring, you’ll get an additional 100 points. In this example, you’ll earn 250 points at this point. Miss a ring, and you break the chain and you’ll get to start over racking up points. An additional feature is the inclusion of nitro rings. This automatically fires a nitro for you regardless of how close you are getting to earning your own nitro. At the end of the race, you’ll get a total of all the points you’ve earned through stunts, rings, and time points. You then hope you’ve gotten into the top 3 on the hall of fame for that course. That’s, well, pretty much it.

The other modes include time attack (race alone for a fast time) and free roam (where you explore the course without opponents, time constraints or buoys to worry about. You just explore the course. This is mostly valuable in terms of familiarizing yourself wit the course in question. You can also get a training mode where you try and complete stunts or maneuver’s in an effort to tick them off the list. Good for getting a better understanding of the game. By and large, these modes simply sit there waiting for you to try them. They don’t seem to unlock a whole lot, but they are there mostly as an additional curiosity that extends the gameplay by a few minutes after you’ve had enough of championship mode.

Generally speaking, this is one of those games that might have been a very good game, but a few critical flaws pulls this game back from that level.

Graphics had a number of positive elements. I thought the water effects where water is splashed onto the camera was very nicely done. The rippled waves on various menu screens were very nicely done. The small character graphics in the standings was a half ways decent attempt to add personality to this game, but they never really shone through as much as I would have liked. The in-game character designs could have been better. At the very least, I would have liked to see a few different outfits to suit the different courses. Instead, every model has exactly one outfit come rain, shine, snow, sleet, or darkness of night. As a result, I thought this side of the graphics fell onto the bland side of things. The atmosphere overall between the floating objects, islands, underwater rock features, and backgrounds were all nicely done.

The audio, for me, fell short. There is some decent sound effects were just barely there enough to add a little dimension to the game. The voice overs gradually become more and more repetitive thanks to a limited number of lines each one of them says. If you select a different character, you might hope to get a completely different set of lines as you race, but then you quickly realize that it is largely the same lines said in a different voice. The other sounds were about average for a game like this. The music was also a bit of a let down. While there was an increase in the consoles capabilities, the music seems almost uninspired compared to the previous game. The music in this game contained nothing particularly memorable. Disappointing to say the least.

Overall, considering how strong Wave Race 64 was, this game seemed like a let down for the most part. The water effects and addition of racers were great to see. The added turbo feature and the breakables were also nice things to see. The big sticking point for me is the controls which seems to be something you fight more and more as you progress through the game. The courses inspired by or directly copied from the previous game simply overshadowed the new courses found in the game. The other racing modes add precious little gameplay to the overall experience. The graphics was hit and miss with the general look of the game being great, but the character models being a bit bland. The audio was by and large a let down with passable sound effects and uninspiring music. So, overall, this is a game that was OK, but not something I would be all that interested in playing much after I’ve gotten through most of the features. A play once and forget game.