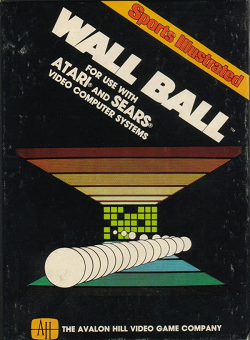 In this review, we give the puzzle game Wall Ball for the Atari 2600 a play.

To try and visualize what this game is, picture Breakout tilted on it’s side and made 3D. That’s basically what Wall Ball is. There’s been plenty of versions and clones of this game since made.

There are 9 levels in this game. You start with a large paddle and a whopping 99 lives. This is definitely more than enough to get your bearings in this game. Mercifully, you don’t have to knock out the entire wall. Still, you do have to take out a large portion of the wall in order to advance to the next round. As you advance to subsequent levels, small things like decreasing the size of your paddle or decreasing the number of lives you have will occur. This definitely makes the game more challenging as you go along.

For some strange reason, when I completed level 4, I was warped to level 9 where I pretty much almost instantly lost. Not sure if that’s by design or a glitch.

The learning curve at the beginning can be surprisingly steep if you’ve never played a game like this before. While it seems like such a simple game to figure out, trying to accurately place the paddle to block the ball can be a bit more tricky than it looks. I often find simply trying to keep the square around the ball as long as possible to be the key to survival. While people with more skills might be able to aim the ball accurately to make quick work of the various levels, I found that just keeping the ball in play was a reasonable enough priority because, eventually, the ball will manage to curve into one of the last blocks you need to hit.

Still, this wasn’t a bad game. It has a decent enough difficulty curve and is both approachable and challenging – a balance sometimes hard to achieve in a game.

Graphically, I thought that while it was impressive that an Atari 2600 game can pull off 3D graphics, a bit more could have been done to make play a bit easier. Something like including a line along the walls to indicate ball distance would have helped a lot. The frame rate did leave a bit to be desired as it sometimes made it difficult to track the changes in ball direction. This might be more of a case of a game that needed a more powerful system more than anything else. Keeping in mind that there were some interesting Atari 5200 games to be had, that also needs to be weighed as well.

The audio was decent enough. No music, but the sound effects were there. Not the greatest though.

Overall, this game was fairly innovative for a game of its time. How many games were out there before 1984 that were 3D? Nowhere near as many as 2D games, I can tell you that much. While it takes a bit of getting used to, the game can be fun and challenging. The graphics were impressive for the system in question, but more could have been done to make ball tracking easier. The sound effects were OK, but there was no music to be heard unfortunately. Overall, though, a decent game.

Overall
Furthest point in game: Made it to level 9 and died pretty much instantly.