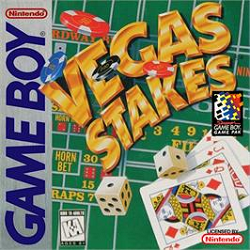 In this review, we try to break the bank in the Game Boy game Vegas Stakes. We find out how well this gambling game plays.

This game was released in 1995. Previously, we reviewed the SNES version. That game earned a huge score and even topped last years Top 10 list. So, we thought we’d give this port a try to see if it is just as good.

Since this game i so much like the original, we thought we’d focus on the differences between the two games.

This game features every game that is found in the original SNES game. It has Black Jack, Slots, Roulette, CRAPS, and Poker. While the games pretty much play the same, the table layouts are somewhat different to accommodate screen size. The biggest change, however, revolves around Poker (7 card stud).

In the SNES game, you face off against 4 other opponents. For those who remember, the AI was such that almost all of the opponents always feel like they have a hand even when they often don’t. Well, in this version, you are only up against a single opponent. While the odds are generally better for you because of the narrowing field, this doesn’t necessarily mean you are in for an easier time. This is because the AI has remained largely unchanged. Interestingly enough, that means the AI is much more appropriate for the heads up situation.

If you are only playing against an additional opponent, lower quality hands are much more playable (such as a single pair or even two pair). Since the opponent almost always feel they have a hand (unless you scare them off with big face up cards), the aggressiveness is much more optimized because there is a better chance that the computer opponent is correct. So, a somewhat tight play may be more advisable in this case should that be your game of choice.

Another change is the fact that there are fewer characters. You get a female companion throughout the game, so there are no choices on that front. Also, if you play poker, you do not get to see the faces of your opponents. This is one of the features that was great to see in the SNES version. Unfortunately, this was stripped out of the game.

While some features are reduced, there is one feature that is expanded on: random people. A lot of the proposals are still in there (selling a diamond, oil drilling, selling of a lottery ticket, etc.). The only two I don’t recall seeing during my play was the broken ankle and the people who want to watch your play. What is put in are the expanded wagering. Unlike the SNES version, you actually have options when it comes to betting on events. You can bet on the horse races with different payouts. In addition, you can bet on fights too. The limits on the bets are quite reasonable for midway through the game, but by the time you reach the Laurel Palace, the payoffs are pretty minimal for the amount of money you are playing with.

The only other change is the ending. This is a much more scripted ending, but the writing is actually more interesting. There is even a small cutscene which makes the ending at least as worth watching as the SNES version.

Beyond that, the game is pretty much the same.

Generally speaking, it’s pretty good what is retained in the game. The passerby’s are very well represented in this game. This is a feature that got high praise from me before and gets high praise again here. There is a little something for everyone here. My only criticism is the limits not making a whole lot of sense now. It might make more sense to have them at $1-$10, $10-$100, $100-$1,000, and $1,000 – unlimited. Adjust the starting cash accordingly and the removal of one casino will likely be barely noticeable. So, there is a lot of great gameplay to be had even if it is somewhat stripped down from the original SNES version.

Graphics underwent probably the biggest change during the porting process. A lot of the great art that made each casino unique has been removed. The entrance has just the same backdrop with the game title. The tables are all the same now. The only thing that really changes visually is the casino icon on the upper left hand corner. While that is a bummer, the animations that are added are great. The shuffling of cards in poker, the retention of the coin drops for slots, and the animation for roulette and CRAPS all work pretty well. While some of the effects are removed, the ending is nicely realized.

The audio is probably what suffered the most in the porting process. While the music is recognizable, it isn’t as well realized as the SNES. While a stripping down was expected, the music suffered some mangling and ends up being pretty average. The sound effects are pretty decent, though.

Overall, this game offers an abridged, yet portable version of the SNES version. A lot of the gameplay has been preserved, but the number of opponents have been reduced down to one. This means you are facing a somewhat more challenging time given that the AI hasn’t changed. Once you get to about $5 million, the odds can still be exploited in your favor. The loss of the faces in the poker game is a bummer, but the passerby’s are still very well realized in this game. The graphics are pretty solid, though the audio suffers some quality loss. Still a great game to play even if you are better off playing the SNES version.